This was a pleasant surprise this week.  Black Canary appears in the latest issue of DC's Justice League.  After the crisis of "Throne of Atlantis" crossover demanded the assistance of more heroes than the heavy hitters of the League, Batman and Cyborg have convinced the rest of the team to start a recruiting drive.

And look who they summon to the gathering:
However, Dinah vanishes after the double-page splash welcome of all the potential Leaguers.  She doesn't play any part in the action later in the issue, and from the sounds of it, the League is really focused on Firestorm, Element-Woman, and the all-new(er) Atom.  Plus, Shazam will be joining in a couple months.  I guess Black Canary is too experienced and competent for the Justice League.

What I found most interesting was Dinah's prologue to the story on page 2.

The League offers an assist in the form of a distraction as Black Canary is fighting with Copperhead.  Dinah's interaction with Batgirl over her comm/radio system jumped right out at me as a classic Birds of Prey moment with Barbara being the voice in her ear.  I don't know if Johns deliberately tried to evoke that sensation or if it's just so intrinsic to the characters now that it cannot be avoided.

Barbara Gordon might be the iconic Batgirl, and I prefer her to Stephanie Brown and Cassandra Caine, but Barbara was infinitely stronger as Oracle and the DC Universe is missing that presence.  Birds of Prey for sure is.

Justice League #18 is written by Geoff Johns with art by Jesus Saiz, who drew Black Canary in the New 52's Birds of Prey for a while.
Posted by Count Drunkula at 6:19 PM No comments:

Time again for another installment of The Yoda and Dinah Show.  Thanks as always to The Irredeemable Shag for donating these pics.

You can follow Shag over at Firestorm Fan and listen to the epic Fire and Water Podcast which you can download and listen to anytime you're craving the kind of high-minded discussion that only Aquaman and Firestorm fans can provide!

Posted by Count Drunkula at 11:33 PM No comments: 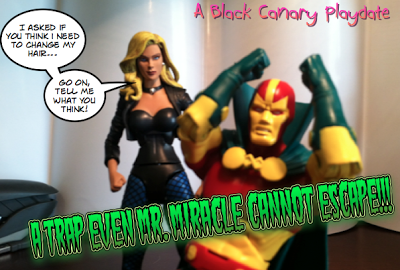 Posted by Count Drunkula at 7:17 AM No comments: