After Revolution and Wolves, the quarterly Birds of Prey one-shots continue with the third installment teaming Black Canary up with Batgirl. Birds of Prey: Batgirl is written by Chuck Dixon with Gary Frank once again providing a knockout cover that reveals Black Canary in an updated version of the costume he had already updated for her in the original Birds of Prey special.  Now her legs are fully covered in what looks like a mostly-solid gray jumpsuit, further cementing her transformation to DC's Black Widow.  On the other hand, she now has a jacket over her jumpsuit, which harkens back to her more classic look.  That's a nice touch.  Also, uh, Batgirl is on the cover looking buff and beautiful and fully upright.  On Batgirl, we meet Greg Land, the fifth interior artist in as many Birds of Prey stories, but unlike the others, Land will hang around for some time.

Land's artwork is on full display from the start with lots of big action-packed images.  In the first five pages, there are only eight panels.  Dixon and Land throw the bang-pow spectacle of Black Canary and Batgirl wailing on some brainwashed thugs of the Mad Hatter--

Wait, why is Batgirl there?  Barbara Gordon is paralyzed, now functioning as the cyber-hacker and information dealer known as Oracle!  What's going on? 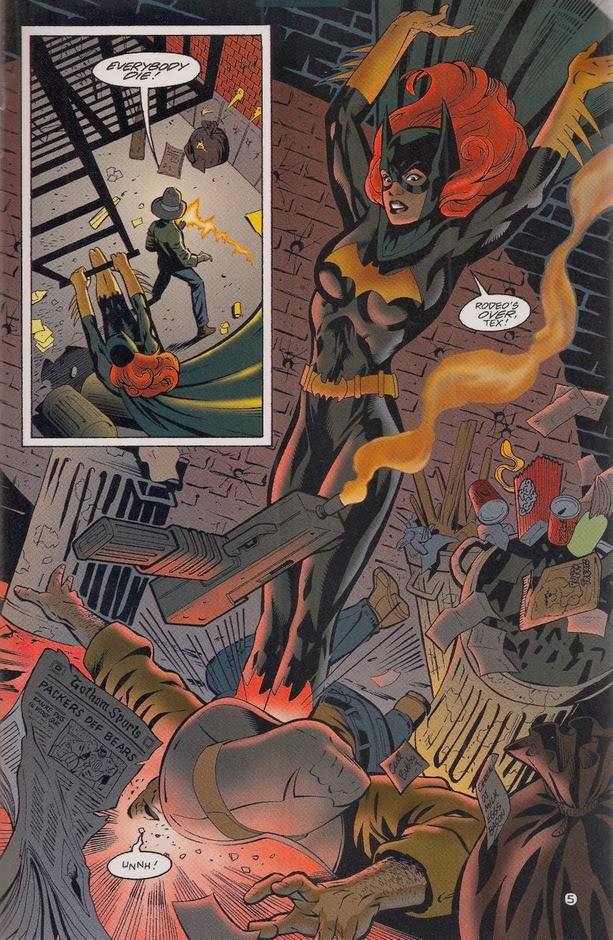 Batgirl tells Black Canary to let the other hat-wearing hoods run for their lives.  The ladies shouldn't pursue them with undo force because the hoods are not in their right minds.  Every one of the Mad Hatter's entourage have been brainwashed by the unique microcircuitry transceivers in the hats.

Black Canary asks Batgirl's help in taking the Hatter down.  She seems a little uncertain, a little green, like she doesn't have much experience in this.  The women also sound like they don't know each other all that well. 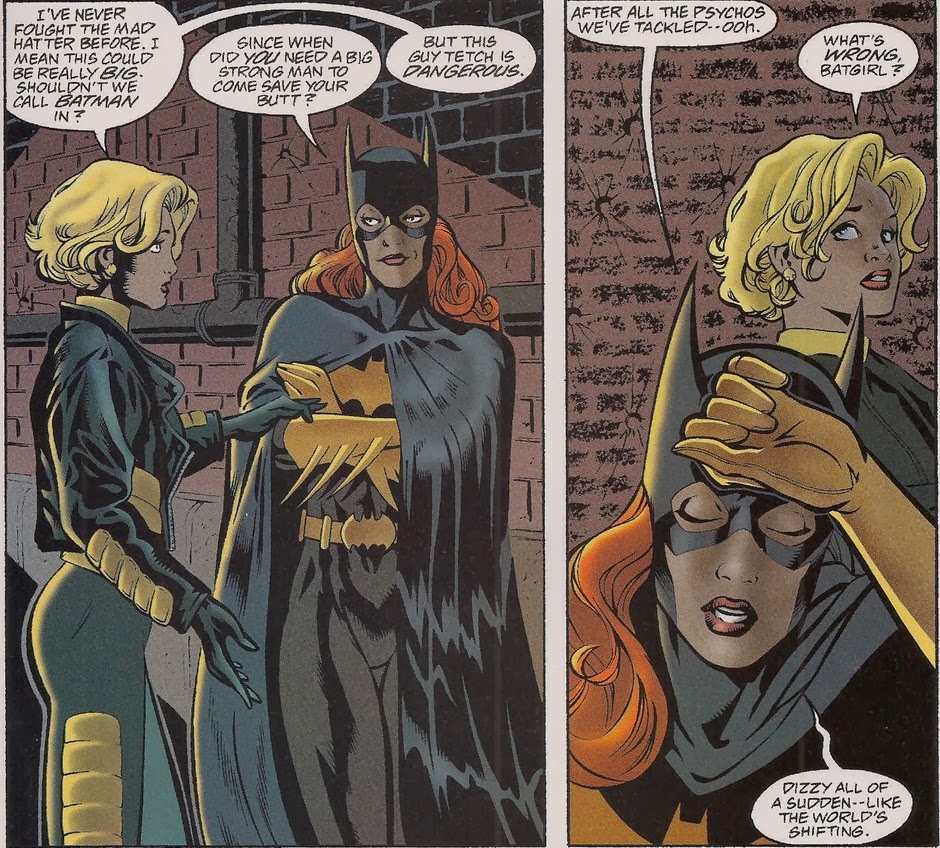 After shaking out her dizzy spell, Batgirl sees to the one remaining henchman who'd been brainwashed by the Mad Hatter.  They discover that the henchman is actually a district judge who tells them he was at the Homburg Club when the Mad Hatter came in and put hats on everyone.  It's the lead they need to chase down the Hatter, even though Batgirl hadn't heard that he'd escaped from Arkham Asylum. As crazy and inexplicable as it is that Barbara Gordon is up and around swinging from rooftop to rooftop in her old Batgirl garb, Black Canary is the one behaving strangely.  When they arrive at the Homburg Club, she refuses to split up, citing the dangerousness of Mad Hatter as reason to stick together.  Sure...

Together, they break in through the roof and sneak up on Mad Hatter's meeting with a newly brainwashed Jeremiah Arkham.  The Hatter wants Arkham to release all of the inmates so madness can run rampant on the streets of Gotham.

Batgirl gets nauseous at the thought of all those Arkham inmates running lose.  Well, one specific inmate to be exact.  And it ain't Two-Face or Poison Ivy or Scarecrow. 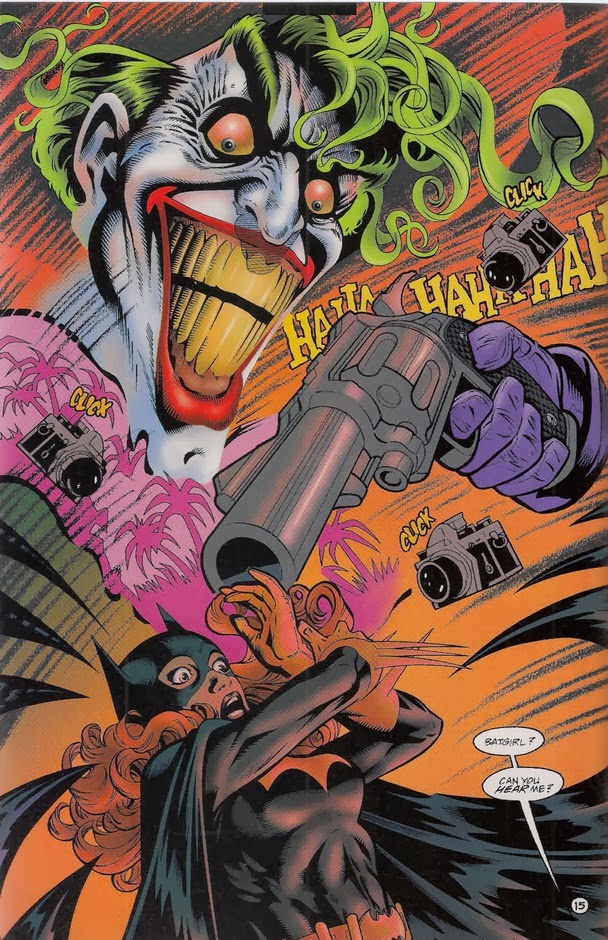 Black Canary can see that Batgirl is mentally and physically upset and asks her for help contacting Batman. 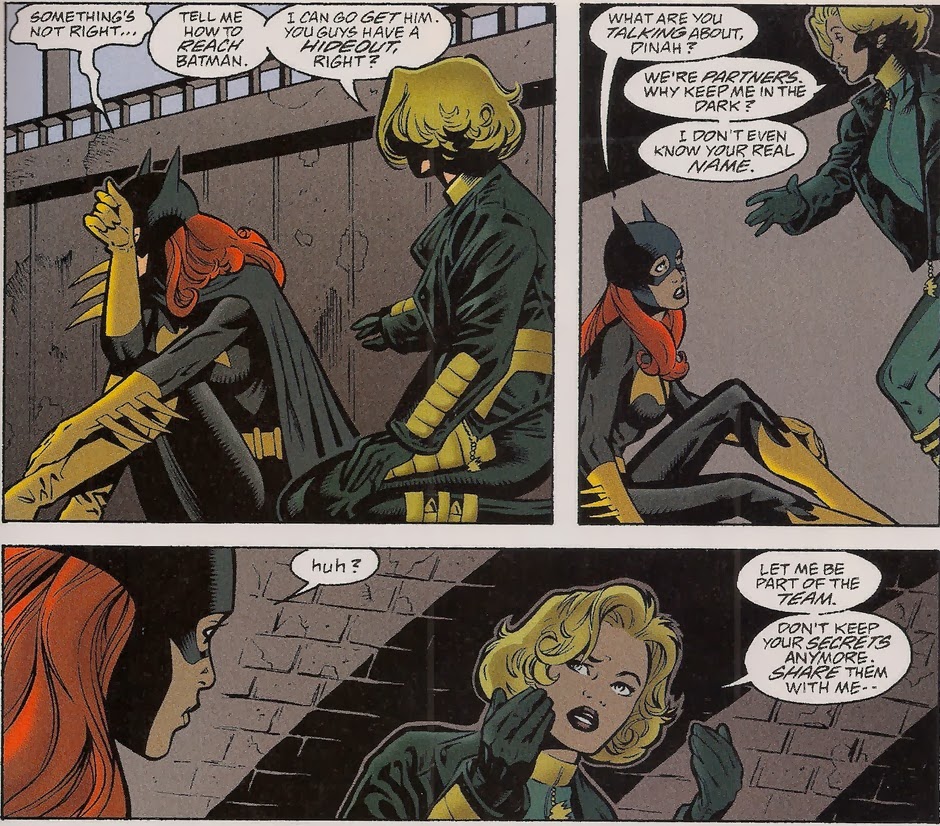 Black Canary presses the matter and the more she insists they bring Batman in, the more Batgirl senses that something is wrong about this whole situation (no kidding!).

Then Mad Hatter's hat-wearing hoods are upon them.  Batgirl and Black Canary take on the brainwashed Gothamites while Hatter escapes with Jeremiah Arkham.  Canary continues to insist they call Batman for reinforcements while Batgirl persists they can handle the situation themselves.  They argue and bicker and Black Canary seems to whine more and more as they chase their prey from the city to Arkham Asylum.

They arrive too late, however, as Dr. Arkham has already freed the patients.  The Mad Hatter, Two-Face, the Riddler, Poison Ivy, Scarecrow, Killer Croc, Bane, Mr. Zsasz, the Ventriloquist and more ambush the heroines.  Black Canary escapes somehow, but Batgirl is knocked out and captured. Batgirl's memories are flooded with the horrific images of the Joker shooting her, paralyzing her, leaving her in a wheelchair.  Memories that don't make sense because, well, she's not in a wheelchair now, is she?

The Joker torments her for a few seconds, but then all of the inmates leave her to search the hospital for Black Canary.  No sooner do they leave, then Black Canary slips out of an air vent and comes to Batgirl's aid.  But she's not really there to rescue Batgirl, is she? 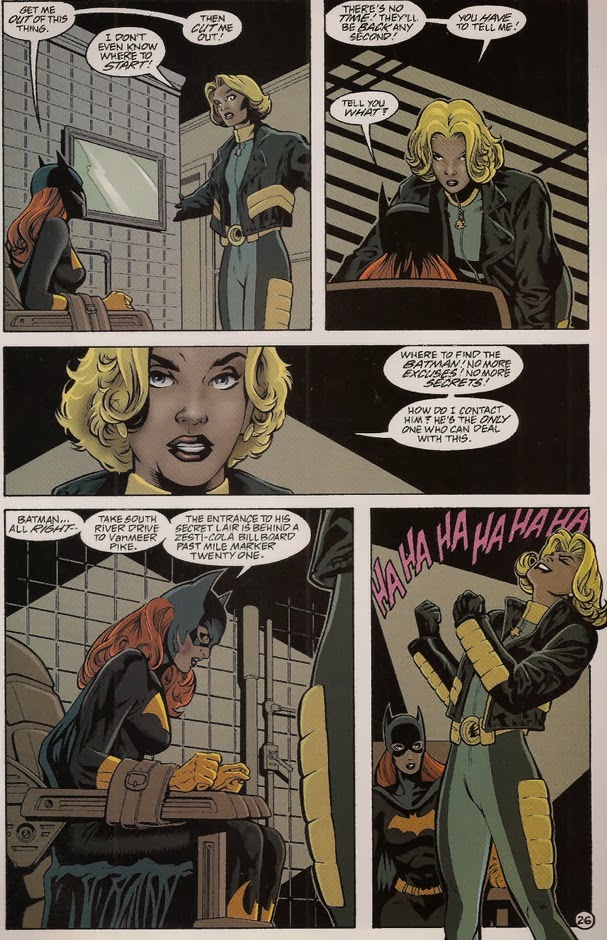 That's an odd reaction for Black Canary to give...

Well, it would be if this was Black Canary. 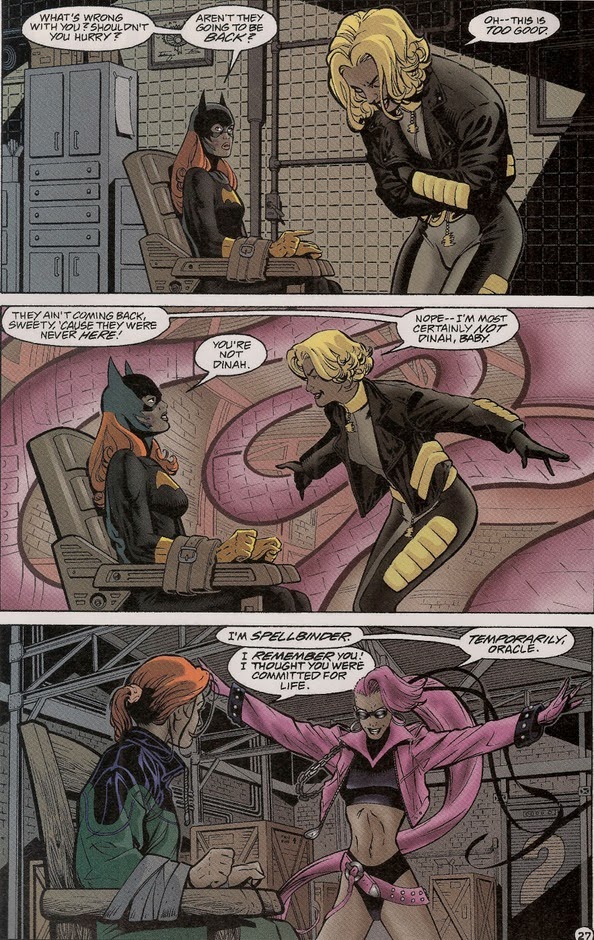 Lady Spellbinder--who does not wear pants, it seems, although who am I to talk, running a Black Canary fan blog?--reveals that she has been projecting the entire issue's worth of scenes into Barbara Gordon's mind.  That's Spellbinder's power, to hijack the sensory perceptions of her victims and force them to experience what she wants.

More than that, Lady Spellbinder seems to know that Barbara is Oracle, claiming that she was hired by someone who wanted to use Barbara's knowledge of Batman to find access to his secret lair.  Whoever her boss is has been aggrieved by Batman enough times that he wants some payback and targeted the "crippled nerdette" as the weak link his the Dark Knight's defense.  Spellbinder also scoffs at Barbara's pathetic fantasy that she would be Batgirl.

Lady Spellbinder and a team of mercenaries head out to find the entrance to the Batcave behind the Zesti Cola sign on VanMeer.  They leave Barbara tied up in the warehouse. 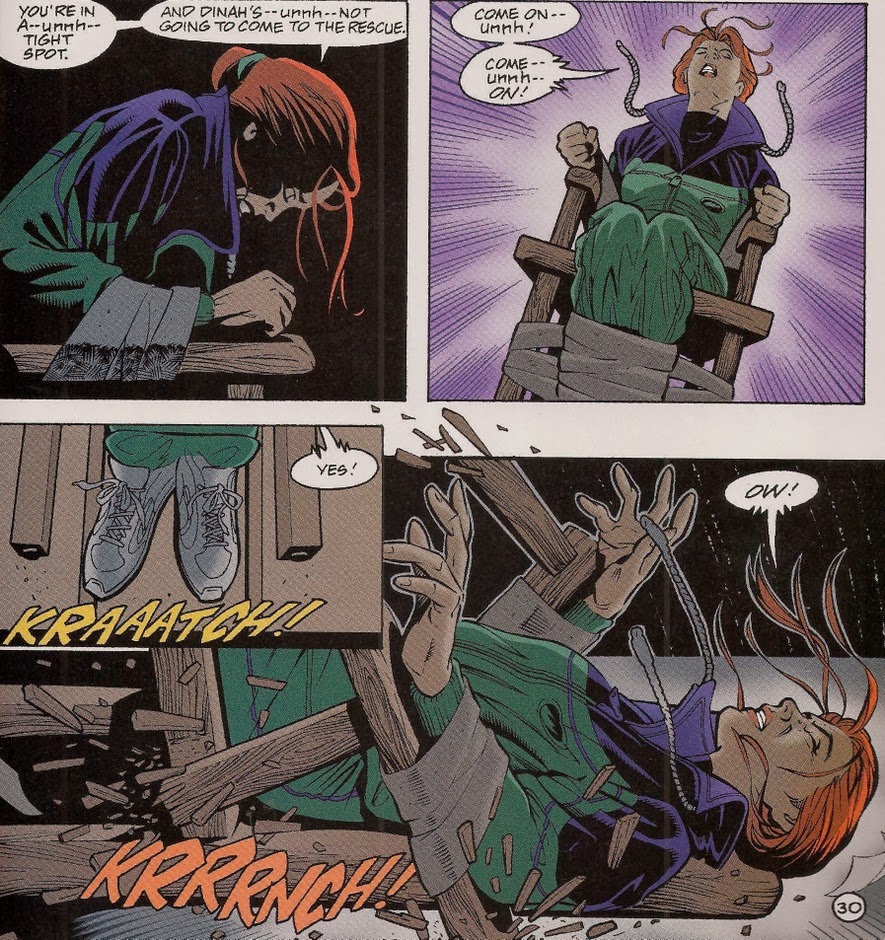 Lady Spellbinder is hella pissed when she realizes that Barbara lied to her.  So pissed that she gets back in the car and drives back to the warehouse...leaving the mercenaries with their guns on the side of the road!  By the time she makes it back to the warehouse, Barbara isn't tied to her chair; she has crawled back to her wheelchair and weaponed-up.

Barbara knows that Spellbinder's power is dependent on being able to see; that's her handicap according to Babs.  So she deprives her of her sight by spraying her in the face with a fire extinguisher and then kneecapping her with a broken piece of wooden chair. 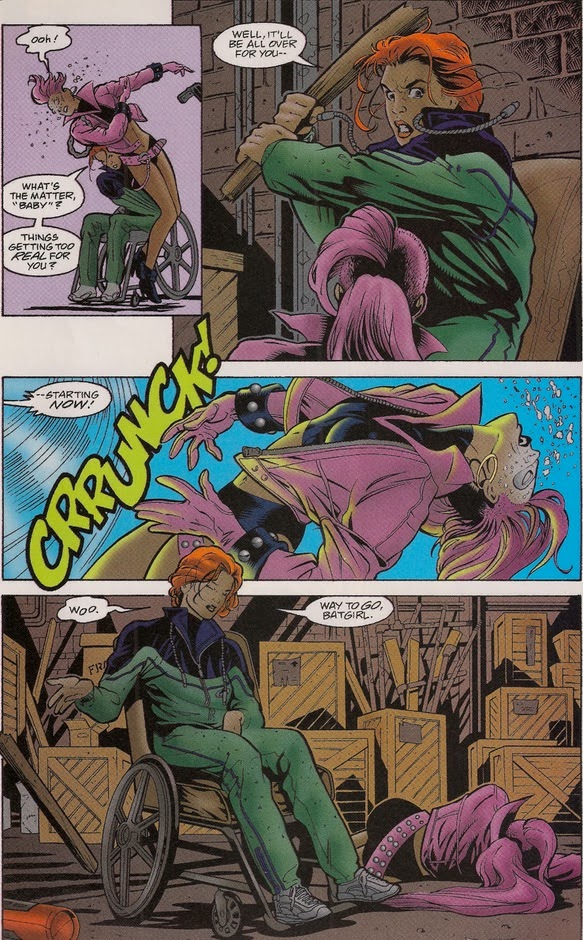 The cops show up to find Lady Spellbinder tied up and blindfolded, unable to use her powers.

Safe at home in her clock tower base, Oracle contacts the real Black Canary who is in the field on assignment.  Oracle insists she's fine but hopes Black Canary gets back to Gotham soon.  They've put their philosophical differences behind and are good friends again, even though Dinah still doesn't know who Oracle really is.

The issue ends with the mercenaries making their way back to their boss, the man who hired Spellbinder.  It appears to be Blockbuster but there's something going on with his head.  There's a tag on the last page that says next: Birds of Prey: Siege.

Of course, Siege never happened, at least not in a one-shot, although Chuck Dixon says most of the story he had planned for that were used in the Birds of Prey ongoing series that would launch one year later.  But that's getting ahead of ourselves.  What about this story?

It's... okay.  There are some fun moments, like seeing Barbara Gordon as Batgirl is always fun, and this story is really about giving her a chance to be the workhorse crime fighter that she never gets to be anymore.  Dixon makes it obvious for anyone with a brain that the Black Canary we see in the first half of the book is not the real Black Canary, and the details that punctuate these incongruities are nicely done.

Honestly, though, I'm almost never satisfied or interested in these "imaginary tales" types of stories.  The last ten pages with Babs versus Lady Spellbinder are a lot more interesting to me because it feels like a real and immediate threat, while everything before felt like an indulgence in flight-of-fancy.

And let's talk about Lady Spellbinder for a second.  When I got to her reveal in this book, all I could think about was the new character created for the New 52 BoP named Uplink.  I remember an interview where Christy Marx talked about created the character with her editor.  But really they already had a character from Birds of Prey history that they could have recycled.  Uplink and Lady Spellbinder both manipulate the sensory reality of their targets, and they both have pink as a thematic color.

I do have some questions about Blockbuster's role in this story.  I don't know how he discovered that Barbara Gordon is Oracle and that Oracle knows Batman, but this seems like a really, really big deal in terms of security.  I hope Chuck Dixon addresses it, but I wouldn't be surprised if he didn't because that's not really his jam.

Next Tuesday I'll review the last and "least Birds of Prey" of the Birds of Prey one-shots: The Ravens.
Posted by Count Drunkula at 8:47 AM