I know that last Tuesday I promised a review of the first issue of the Birds of Prey ongoing series, but  I'm pushing my coverage of that series back until at least the second week of April.  In the meantime, I've got a Black Canary team-up I've been sitting on for a while.

The Brave and the Bold #62 pairs Black Canary with Starman for the second consecutive issue in "The Big Super-Hero Hunt" written by Gardner Fox with art by Murphy Anderson.  Click here to check out my review of their previous team-up. 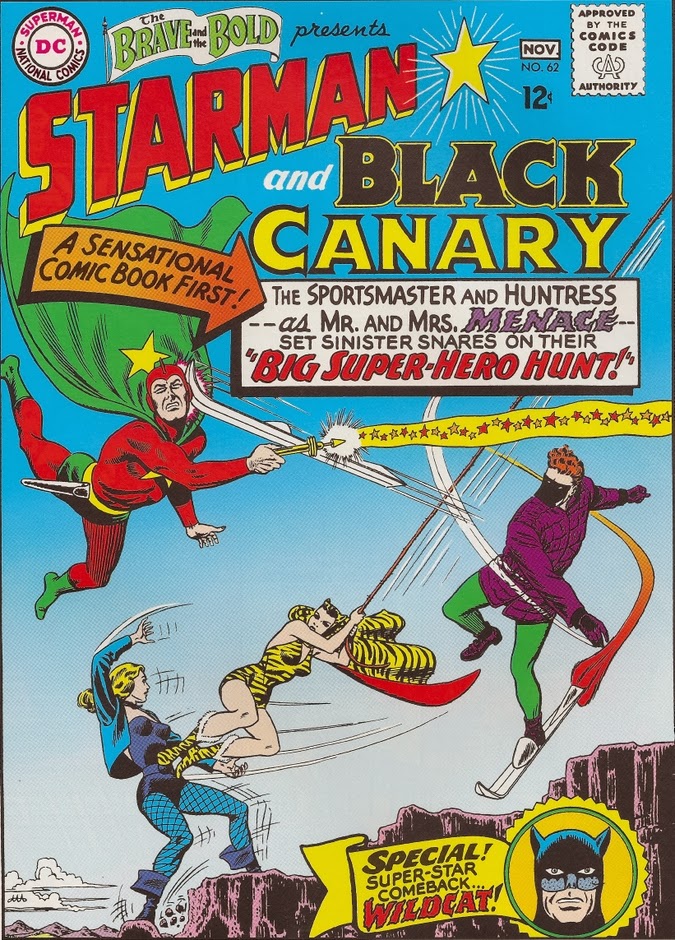 Boy, the upper half of this cover is really, really busy.  There's a whole lot of text up there contrasting with the rest of the cover, depicting relatively small characters in battle against a pretty stark background.  As we can see, Starman and Black Canary are confronted by the villainous coupling of Sportsmaster and The Huntress (who would later be known as Tigress).  And the other great thing about this issue, as advertised on the cover, is it features another one of my favorite Golden Age heroes: Wildcat. 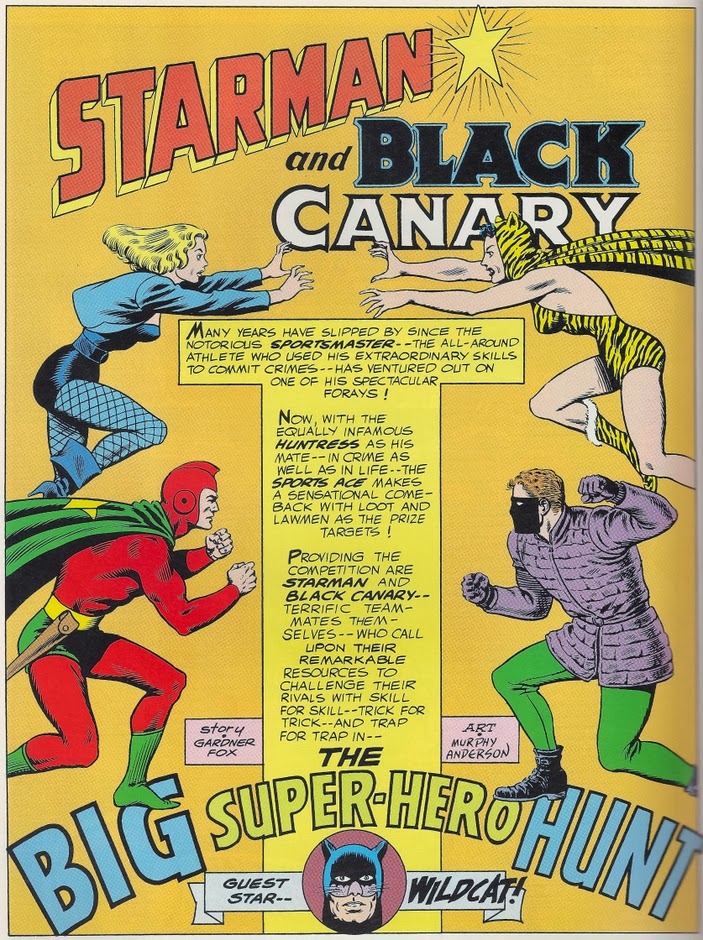 As with the last issue, we get a teaser page divided into two columns, but this time Starman and Black Canary are on one side and their adversaries on the other.

The story begins in Federal City where the upper crust of society has come to view wax mannequins of ancient sports figures.  Suddenly, the statue of Discobulus cracks and falls away from a living man dressed as a fisherman.  Using a fishing rod, the stranger snares a valuable trophy and sets off some sports-related traps for the shocked onlookers and local cops.

As luck would have it, however, the director of the sportsman's display is having dinner in the building with Dinah Lance, wife of private investigator Larry Lance, and secretly the costumed crime fighter known as Black Canary. 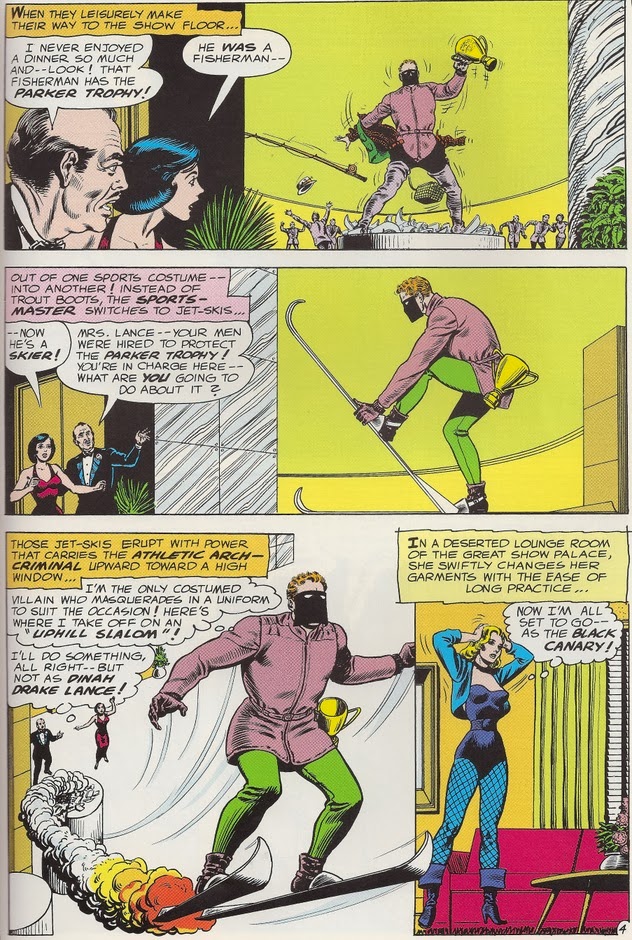 Meanwhile, on the outskirts of the city, Ted Knight, astronomer, businessman, and superhero called Starman, enjoys a quiet night at home.  On his estate, Ted has crafted scale models of some the great astronomical observatories from around the world.  When Ted walks by the life-size reproduction of the Pekin Observatory, though, he hears a voice calling out for help from inside.

The Pekin Observatory is a maze designed by ancient Chinese engineers, and despite the fact that Ted had it rebuilt on his property, he doesn't know how to get through the maze.  So he dons the disguise of his adventurous alter-ego, Starman, and uses the Cosmic Rod to fly over the maze.  Inside, he finds Wildcat, his one-time teammate from the Justice Society of America, knocked unconscious.

But Starman and Wildcat aren't alone there. 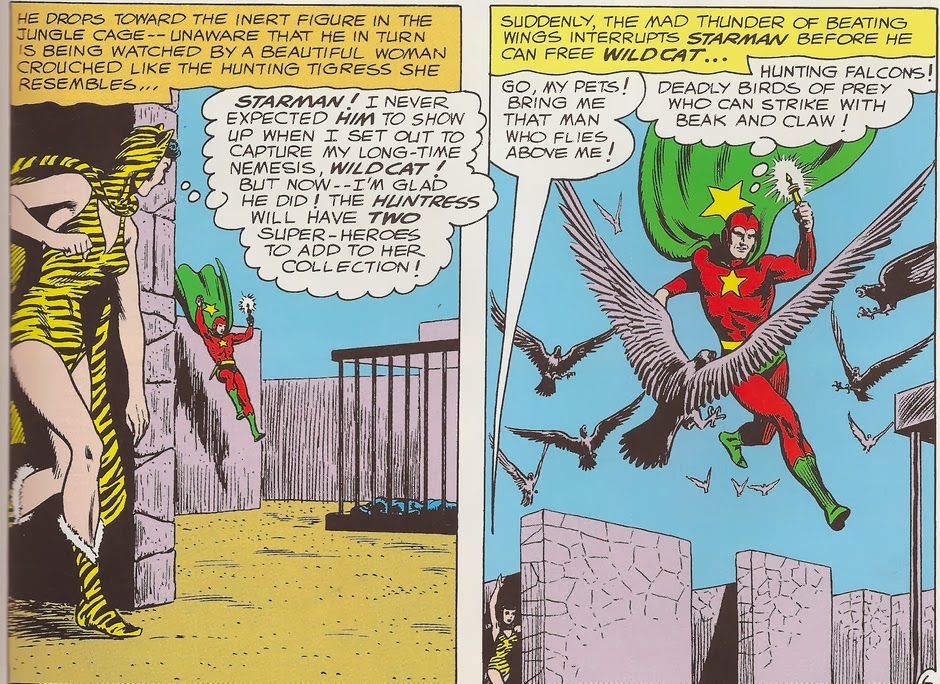 Attacked by the falcons, Starman flies high up in the atmosphere where he happens to spot a shooting star falling through the night sky.  He uses the Cosmic Rod to smash the meter, sending its firry debris at the birds, scattering them at first.  When the falcons regroup, he uses the Rod to transform the moonlight into energy that freezes the birds in ice blocks.  And after that he creates an Aurora Borealis effect to distract the remaining birds.  Yeah, all of that makes perfect sense.

Starman pursues Huntress, but the lady was en route to meet her boyfriend, Sportsmaster, returning from his heist of the sportsman's show.  Sportsmaster sees Starman first and throws a ski at poor Ted. 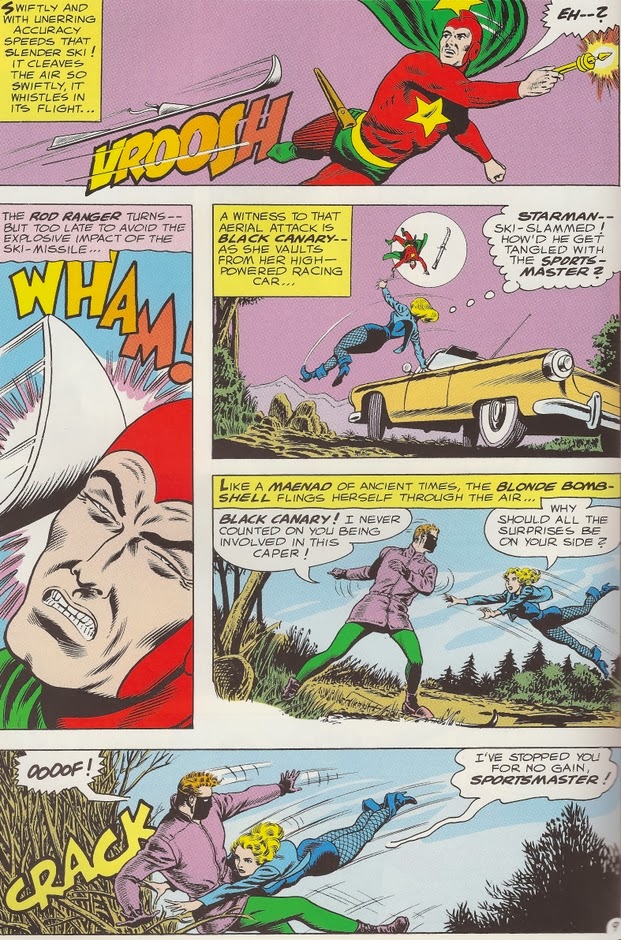 Black Canary lifts Sportsmaster over her head and spins him around before heaving him off.  Proud of this miraculous physical feat, she doesn't see the Huntress sneaking up behind her. 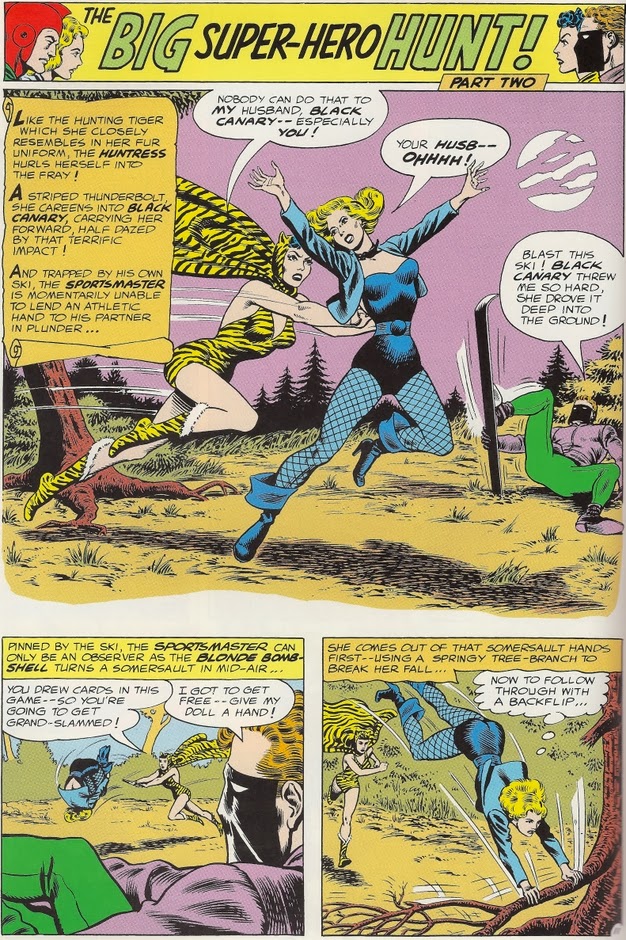 Black Canary sends the tree branch back at Huntress, taking the wind out of her.  But when the Canary moves in to keep the woman down, Sportsmaster trips her with one of his skis.  Black Canary falls headfirst into the tree, knocking herself out.

Sportsmaster and Huntress escape to water where Sportsmaster has a boat waiting for their getaway. Starman and Black Canary stake out Sportsmaster's skis, waiting for the villain to return and claim them.  Instead, however, the skis are remote activated by jets that fly them off into the sky.  Starman grabs Black Canary and uses his Cosmic Rod to fly after them.  They follow the skis to an isolated chalet in the countryside.

The heroes search the house, and when they come to the underground cellar, they find cages of animals...and Wildcat, too! 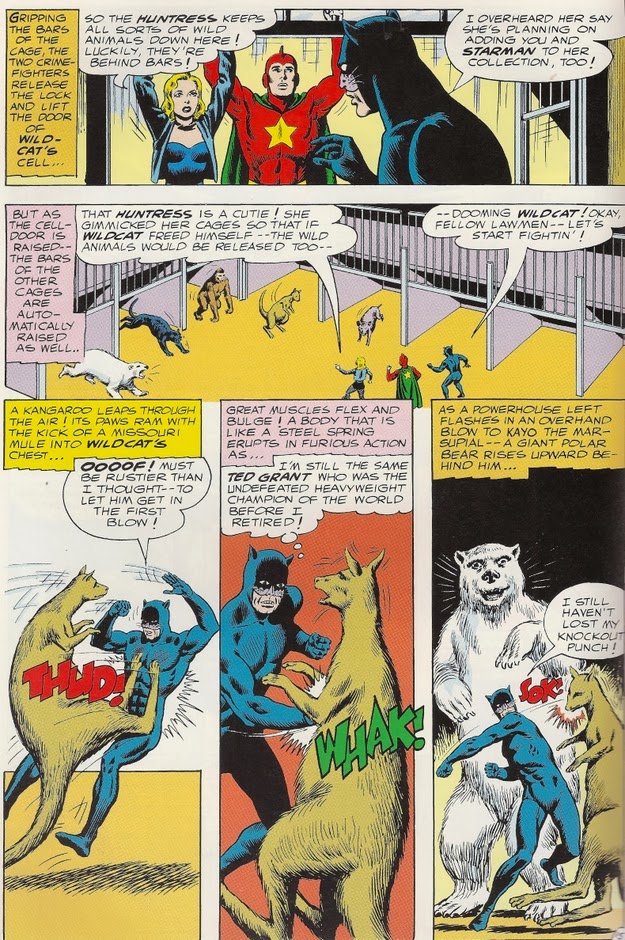 Wildcat fights the polar bear while Starman tussles with a black panther and wild boar.  He uses his rod to send the panther flying and locks the boar in another cage.  Black Canary uses her famed judo mastery on a giant gorilla. 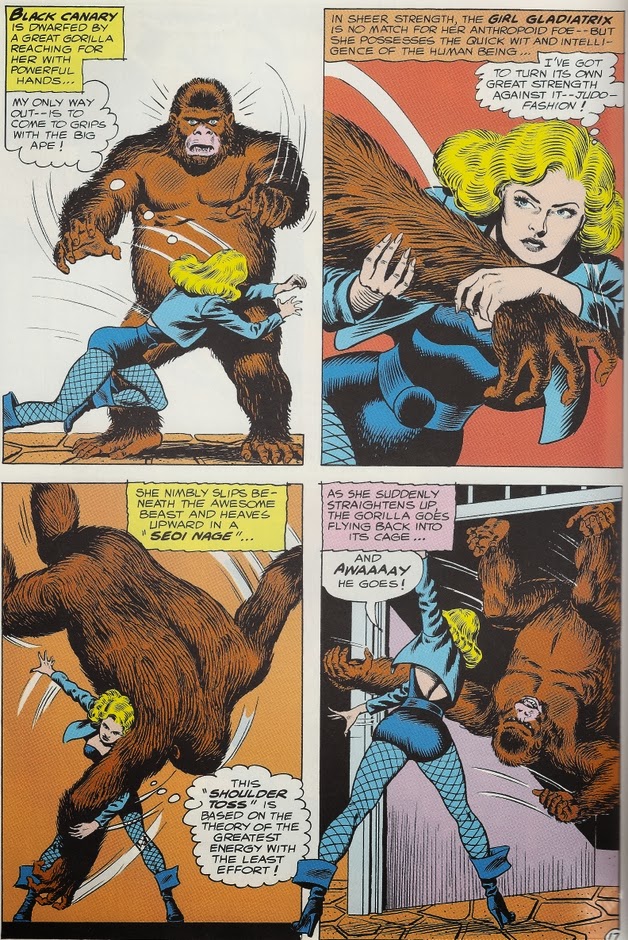 While all of this is going on, Sportsmaster and Huntress play a round of golf outside on a green that somehow floats above the ground.  The green floats all the way to the Federal City Country Club where Sportsmaster drives golf balls at the golfers, knocking them out, so he can steal prize money from the club. 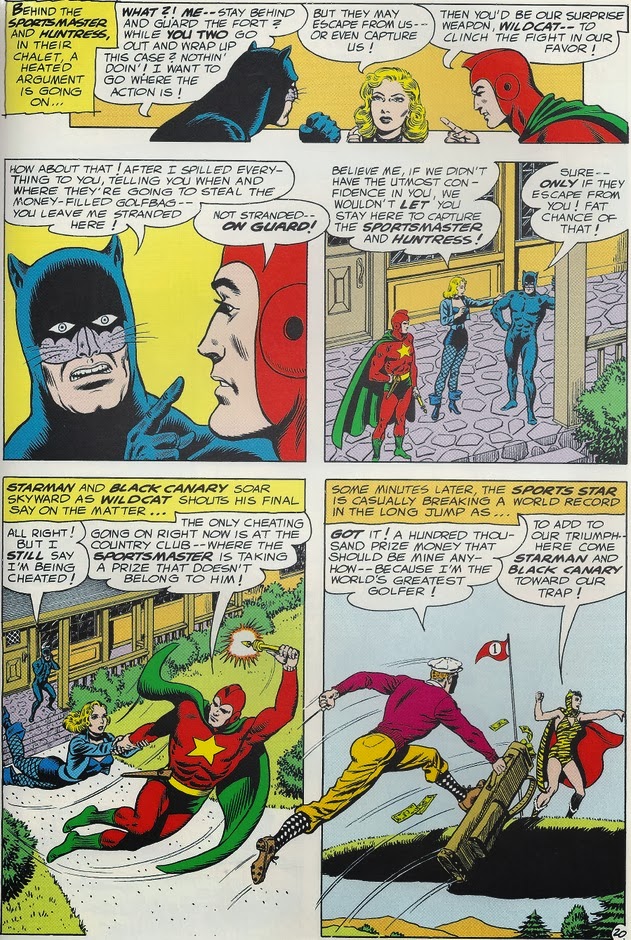 Starman engages Sportsmaster, with the latter throwing his golf hat and the pole, but Starman manages to dodge and deflect using his powerful rod.  Black Canary chases Huntress until she falls into a disguised hole in the ground.  Huntress grabs her and flips her out of the hole, sending her on a collision course with Starman.  But the Cosmic Rod sends Black Canary back at Huntress. 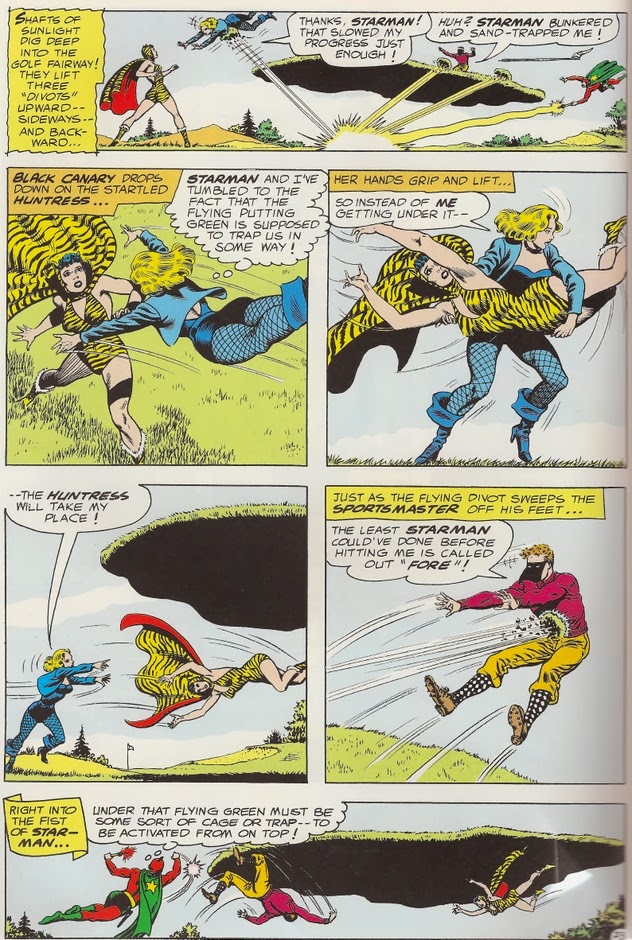 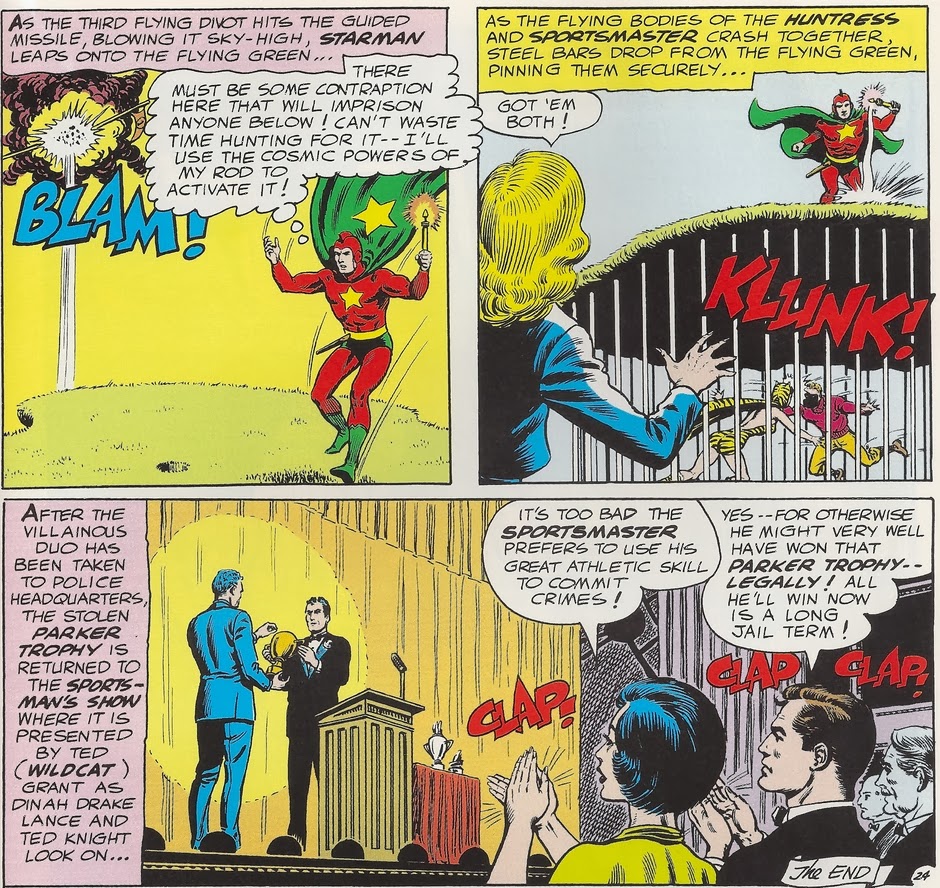 This story isn't as good as the previous issue where Canary teamed up with Starman to fight the Mist, but it's still pretty fun.  Sportsmaster demands a certain level of suspension of disbelief in order to take him seriously as a villain, but a few of his gimmicks were interesting if nonsensical.  We don't get much characterization from Dinah or Ted, and Wildcat doesn't do much of anything important.

Still, the best part of this issue is seeing Black Canary fight super villains.  In her solo adventures during the Golden Age, Black Canary never had a rogues gallery.  The only time she fought real costumed villains was as part of the Justice Society of America.  It makes sense then that in these issues of The Brave and the Bold she would piggyback on other heroes' foes.

I read this story in the collected Black Canary Archives.  If you can find it there or on its own, I highly recommend reading this issue!
Posted by Count Drunkula at 12:00 AM