Black Canary interfered with an angry gypsy woman chasing a Nazi war criminal.  The gypsy, Zenna Persik, used her magic to transplant her mind with the Canary's so Dinah ended up in a stranger's body and captured by the mad Doctor Schlagel.  Zenna used the Black Canary's bod to board the Justice League satellite where she was captured by Wonder Woman and the Elongated Man. 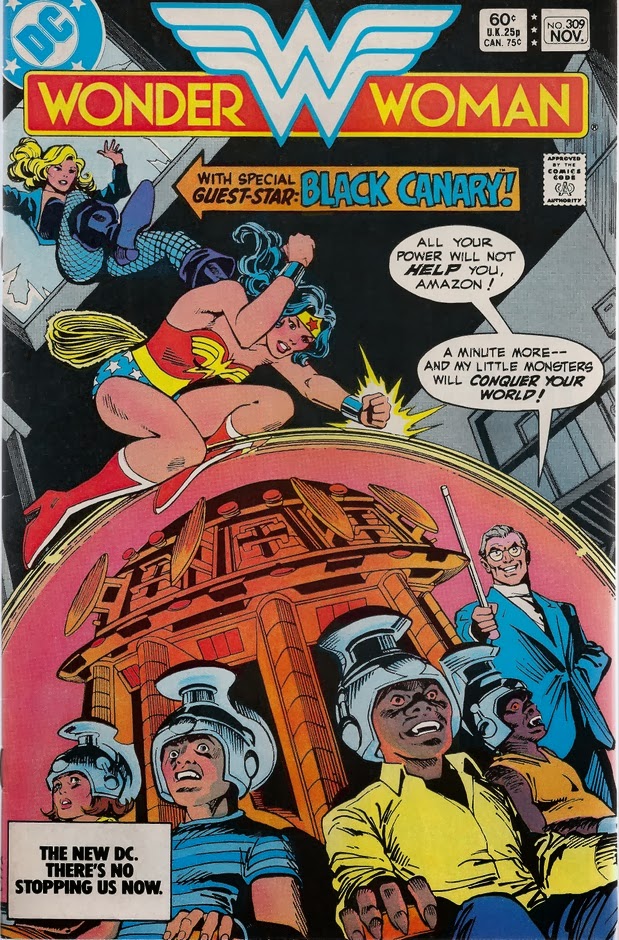 Wonder Woman #309: "The Black Canary is Dead" is written by Dan Mishkin with art by Don Heck.  It was published in November 1983. 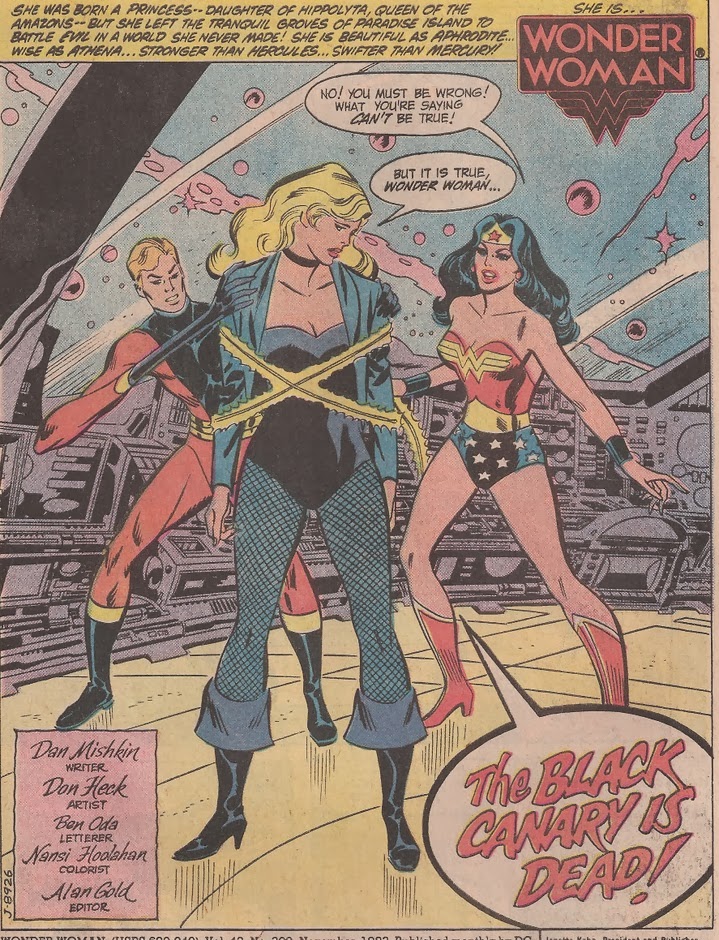 While bound in Wonder Woman's Lasso of Truth, Zenna recounts how she swapped minds with Black Canary, the unfortunate result of which left Dinah powerless in the clutches of Dr. Schlagel and his army of mutant Bigfoots.  Wonder Woman refuses to believe that Dinah is dead, especially since Zenna didn't see Schlagel kill her. 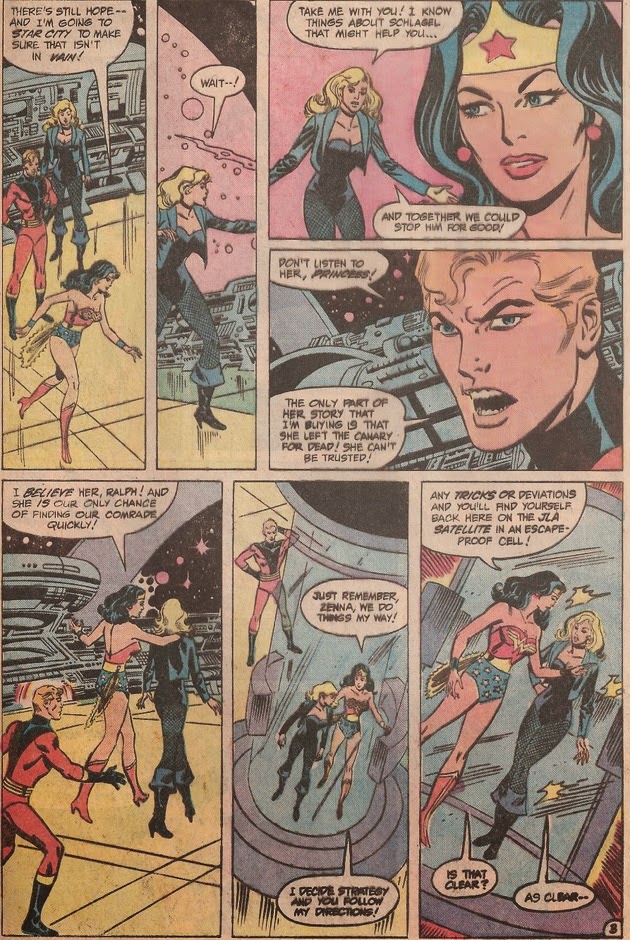 Wonder Woman and Zenna Canary teleport down to Star City.  Zenna explains that Schlagel converted a warehouse into his lab to continue the inhuman experiments he began under Hitler.  She reiterates how he tortured and killed her people and her hatred for him knows no limit.

Meanwhile, in Schlagel's lab, Dinah has been sneaking around in Zenna Persik's body.  She might not have her sonic scream or Zenna's gypsy magic, but she still has years of martial arts training locked in her mind. 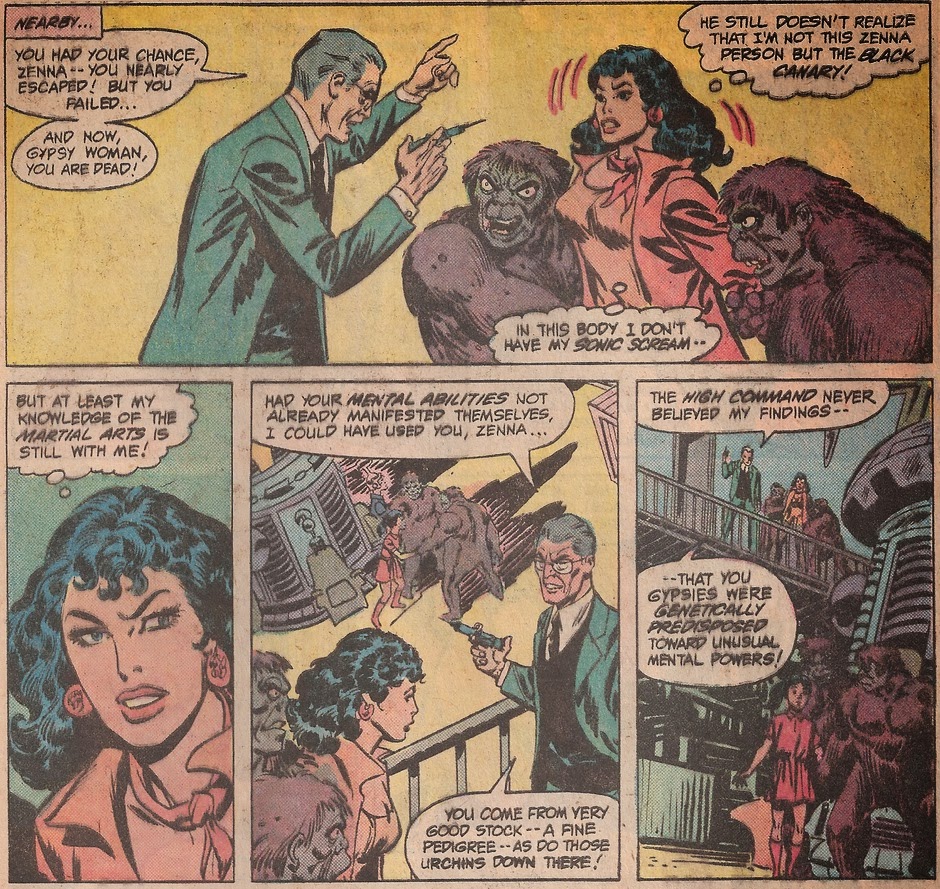 She lets the villain monologue so he can reveal that he's been kidnapping children to tap into their latent psychic abilities to feed his powerful machine.  With gypsy telepathic and telekinetic powers feeding him, Schlagel will be able to destroy America and take over the world.

While he's rambling, Dinah notices her own face looking down from the skylight.  Wonder Woman and Zenna Canary are on the roof, preparing to act.  Wonder Woman uses her lasso to stun two of Schlagel's mutant servants, and Zenna reverses the mind-swap with Black Canary.

Dinah cautions Wonder Woman against treating the monsters too roughly--they are children after all--while Zenna uses her new spacial position to try to kill Schlagel.  Unfortunately, his machine is working, giving him enough superpowers to hold them off.  "Even if you were men, you could not reach me!" he taunts.  (Sexism from a Nazi?  Now I've seen everything!) 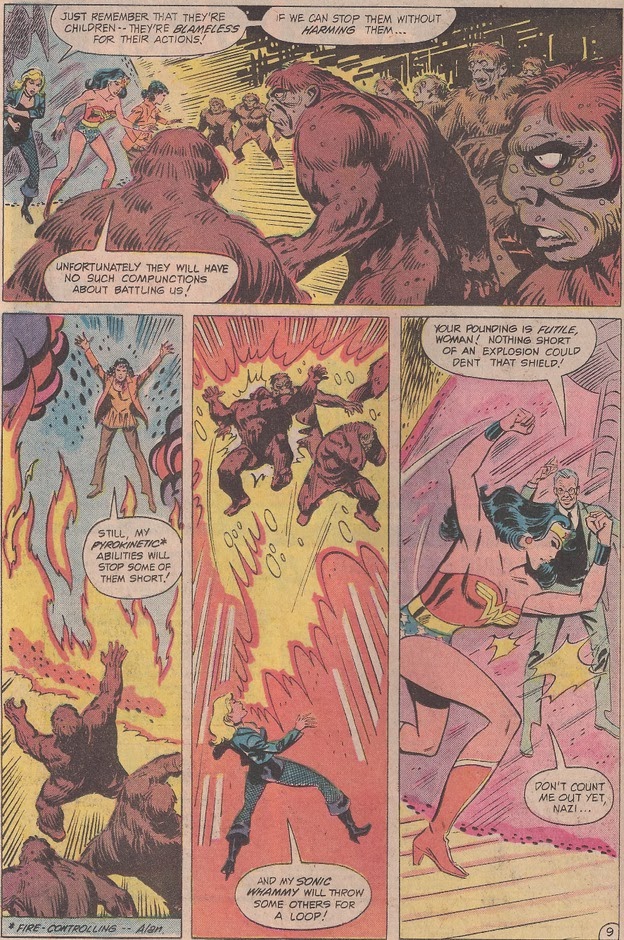 Wonder Woman punches through the psychokinetic shield, slowly forcing her way to Schlagel despite his powers and protests.  "It is impossible!" he shouts.  "They don't teach us that word on Paradise Island," Wonder Woman responds.  At the second-to-last second, Schlagel teleports himself, his machine and Wonder Woman with him.

And at the very last second, Zenna uses her powers to swap bodies with Wonder Woman so that she travels with Schlagel, leaving Diana trapped in her gypsy body.

Across the country at Walter Reed Army Hospital, Colonel Steve Trevor is about to be discharged.  On the phone with Etta Candy, he learns that the general sent someone else to an assignment in the Caribbean that was supposed to be Steve's.  Before leaving, he's visited by Lisa Abernathy and her daughter, Eloise, thanking him for saving their dad.  They know he knows Wonder Woman and hope they get a chance to meet her someday.

Wonder Woman in Zenna's body and Black Canary fly across the ocean in the Invisible Jet to where Schlagel is going to sabotage the United States' new missile defense system.  Zenna in Wonder Woman's body is trapped in a psychic cage, unable to use any of Diana's powers. 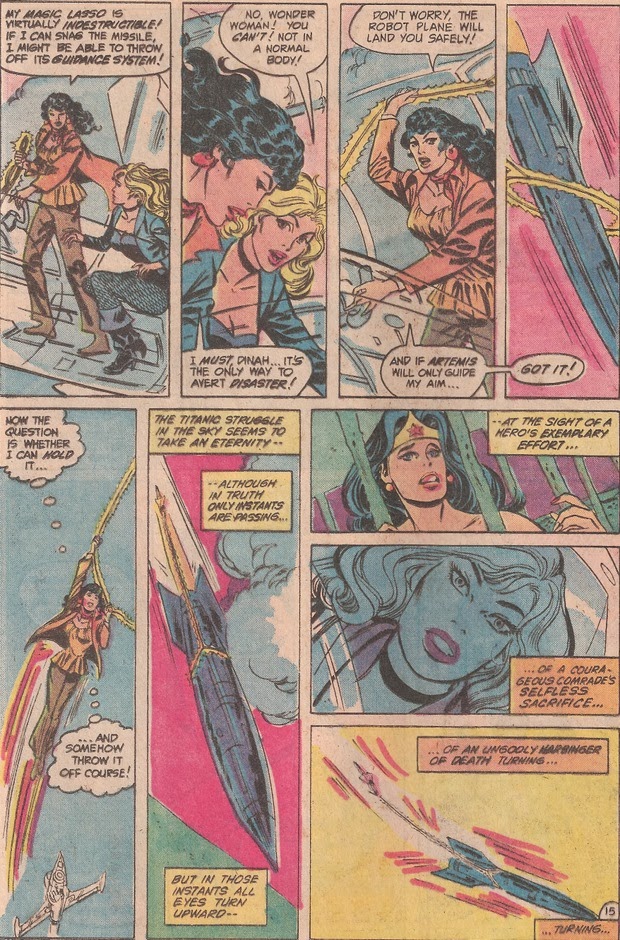 The missile turns right back into the machine killing Schlagel, and appearing to kill Wonder Woman in Zenna's body.  As Black Canary and the Army search the area, Wonder Woman comes ashore.  And it is the real Wonder Woman, who explains that Zenna swapped minds with her so that she could sacrifice herself to kill Schlagel and stop his weapon.

Hey, wait... Wasn't that machine powered by a bunch of children strapped down to it?  Did that missile blast just murder a bunch of kids?  Huh, I guess it was fully powered and Schlagel no longer needed the kids anymore.  Maybe I missed something.

Anyway, that's the concluding half of the crazy gypsy body thief.  Dan Mishkin delivered a fun little story that shows how obsessed Zenna became with revenge to the point that she endangered the others and had to die to fulfill her mission.  Black Canary gets some decent action in this issue, but as a character she's mostly a spectator this time around.  Her body at least appears on almost every page.

Black Canary returns in Wonder Woman #310 as Diana tells her a story of Amazonian glories past.  Come back next Thursday for that review!
Posted by Count Drunkula at 12:08 AM