Birds of Prey #5: "Chokepoint" is written by Duane Swierczynski and drawn by Jesus Saiz, who uses an inker for the first time in this series.  The inks by Javier Pina, though, is pretty sparse.  June Chung is back to provide colors.

David Finch provides the cover, which for the first time gives a sense of context and background.  The image depicts Black Canary, Starling, and Katana squaring off against some unseen enemy in what looks like a warehouse.  There is a painted finish to the cover that gives Finch's lines an anime style that is quite different than previous covers.  Also, Dinah's back is about to snap from the weight of her breasts.  Maybe that's Power Girl in Canary's clothes… 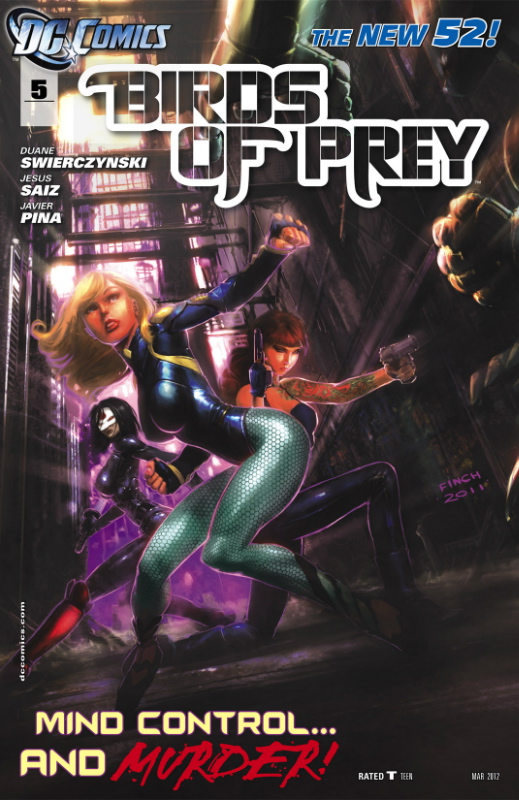 Issue #5 opens with the Birds--like me--trying to understand what's happening.  The ladies had been   infiltrating the lair of Choke, a mysterious bad guy who can turn people into walking bombs.  They were surrounded by an army of Cleaners--soldiers with "stealth-suit" technology--when they abruptly "skipped ahead" to a daytime city street with no memory of how they got there or what happened in between.

And suddenly they're being attacked by soldiers who aren't wearing stealth-suits.  As the Birds fight back, they realize that their memories conflict with each other.  For instance, some remember sneaking into the building, and others don't.  Some remember Batgirl being with them; some don't.  And some have mysteriously healed from wounds. 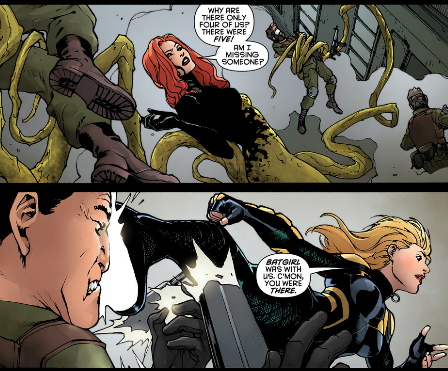 We don't know who these soldiers are, and if the Birds know they don't say so, but, whatever, Starling shoots them, so I hope they weren't U.S. Army or a local S.W.A.T team just doing their jobs.  Katana, for her part, only slices their ankles with her husbandsword so as not to kill them.  After the soldiers are incapacitated, Black Canary orders the team to fall back to safehouse down the street because police cars are en route.

The only thing the ladies agree on is that their memories are full of gaps, so Dinah suggests they all split up, take time to recuperate, and meet again in twenty-four hours.  This makes no sense, but I don't have the energy to delve into why right now.  Dinah writes the name of their rendezvous location on each woman's forearm.  Is it because she doesn't trust texting?  Or she thinks the room is bugged and doesn't want to say it out loud?  Whatever. 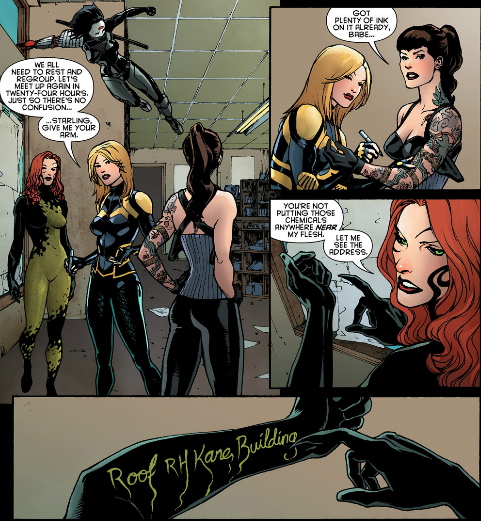 The story then follows Starling during her time off.  Starling gets to narrate a few pages, which is great because we really need more insight into her character.  I want to believe there is more to her than shooting, drinking, and thinking about sex.  Unfortunately, from her narrative captions and the action on these two pages, "shooting, drinking, and thinking about sex" is really all there is to her. 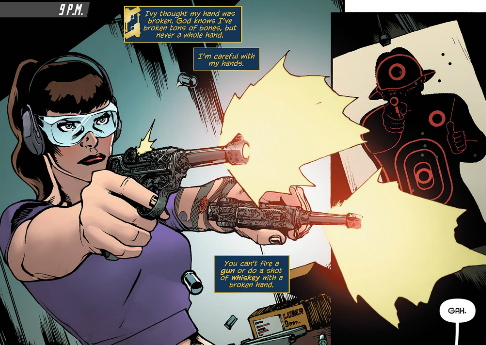 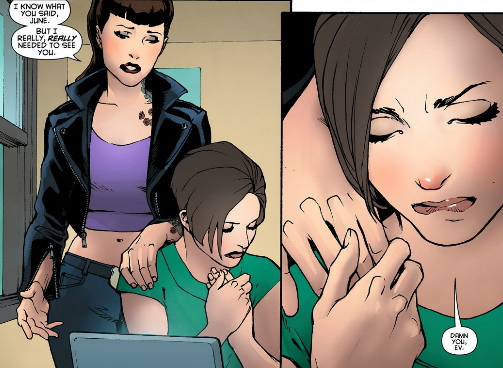 Later that night, Dinah meets with Batgirl on a rooftop.  Batgirl restates her objection to working with the Birds that she voiced in the first issue and completely ignored in the fourth.  She also denies having met with them last night, so either her mind has been wiped, or the other women have been incepted.

The next morning, Dinah goes to her dojo to clear her mind by training.  Katana arrives and they spar while talking about how lonely Dinah is, how tough their lives are, and joking about how they shouldn't trust Poison Ivy. 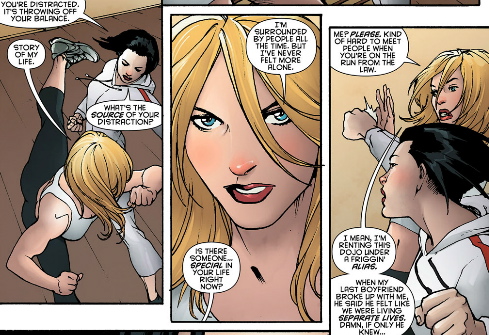 Speaking of Ivy, she spends her morning in the park soaking up foliage or something.  She is met by a mysterious man carrying a mysterious suitcase.  From the sounds of their conversation, Ivy has a hidden agenda and isn't that loyal to Dinah and the others. 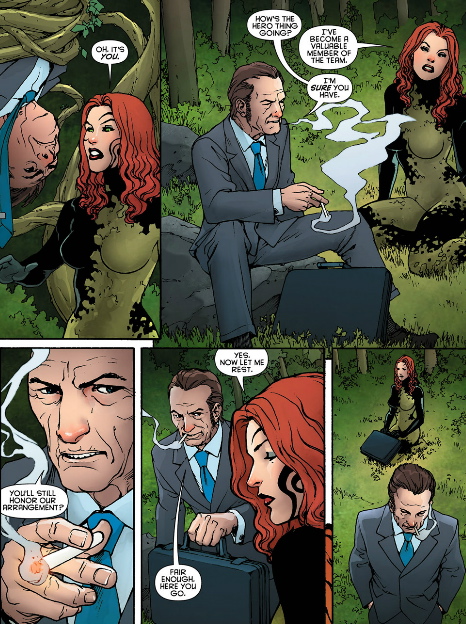 Later, Dinah is sitting in a coffee shop, reading the paper, like any other fugitive wanted for murder.  She comes across a startling headline that we don't see.  This causes her to rush out of the diner can call Dr. Trevor Cahill, a neuro-chemist who she has flirted with over the past few days. 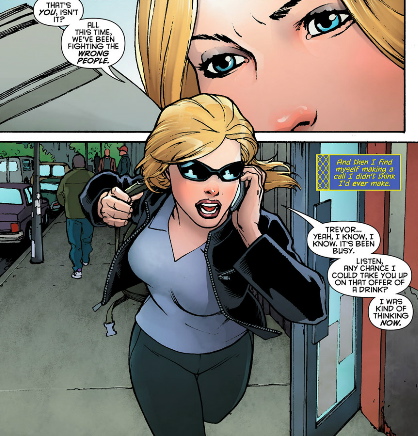 We then cut to the rooftop rendezvous the Birds had arranged the night before… so Dinah's date with Trevor… didn't matter?  Anyway, Starling doesn't show up but %@$#ing Batgirl does!  What the hell, Swierczynski?

Dinah explains that Choke, in addition to turning people into walking bombs and transceivers, has been making Cleaners out of everyday people.  She wants to locate one of these "sleeper agents" and follow them to Choke's lair.  Hang on, didn't they already find Choke's lair?  They went there last issue.  Why didn't they return to the last place they remembered instead of splitting up for twenty-four hours? 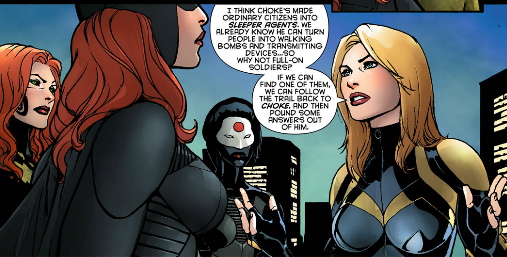 At the same time, Starling is on a bridge because she believed that was the rendezvous point.  So did Dinah set her up and write the wrong location on Ev's arm?  Or is her memory/perception being altered by Choke?  Then she is ambushed by yet another group of gunmen who don't look like the stealth-suit Cleaners and don't look like the soldiers from the beginning of the issue. 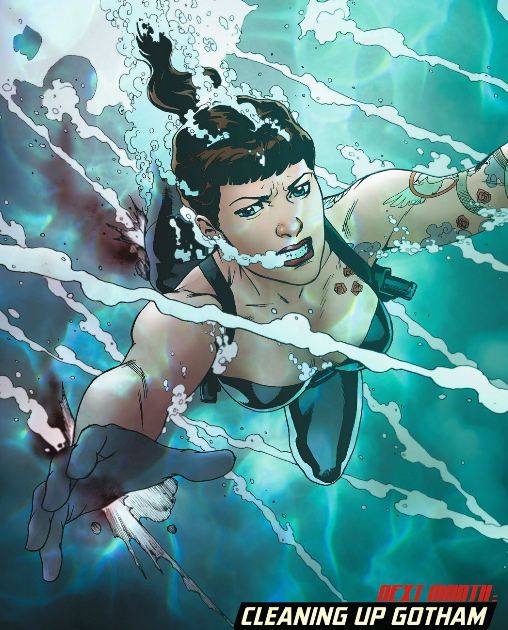 Falling from a bridge into the water below--if it didn't kill you instantly--would certainly knock you unconscious, leaving you to drown quickly.  Couple that with broken bones in the hand and leg and the accompanying blood loss would either weaken you to the point of drowning, or send you into shock, leaving you to drown.

So… I guess this is how Starling dies.  And if she doesn't, I'll be pissed come issue #6.

Everyone acts and sounds stupid in this issue.

At first, Batgirl claims to want nothing to do with Black Canary's team, contradicting everything she said in issue #4.  But by the end of the issue, she joins them again just because she has the free time.

Poison Ivy is obviously plotting some kind of betrayal, and everyone suspects it, but no one does anything about it.  Only Batgirl openly voices her distrust of Ivy, and Dinah responds harshly to Batgirl for it.  This makes Dinah look foolish.

We learn a little more about Starling in this issue.  She has an Uncle Earl who taught her lessons about paranoia.  And goons have been trying to kill her for years.  And she's gay.  And, um… she likes shooting stuff and drinking stuff.

I have expressed my fondness for Jesus Saiz's art in previous reviews, but I have also questioned what appears to be a disconnect between what is being told and what is being shown.  This feeling is exacerbated in issue #5.  The opening "action" scene is awful because the art and dialogue don't match.  There is no tension in this sequence.  You could take the dialogue in pages one through five and put it in any other scene or location.  The fight doesn't matter.

I haven't read anything else written by Duane Swierczynski so I can't compare his writing on this title to his body of work as a whole.  I have read other books illustrated by Saiz, though, and I never felt like there was a disconnect between the writing and the art.  That's is all I feel while reading these issues.  And that tells me the problem is the script or the editing.

But there is no shortage of other flaws in this issue.  It moves like the trailer to a suspense movie, with characters and scenes only glimpsed, out of sequence, undeveloped, and entirely out of context.  That's how this issue felt: bereft of context.

All the momentum of what could charitably be called the "investigation" part of this story arc that was built last issue is tossed out when the ladies literally choose to take a day off.  This series is incapable of maintaining focus, building character, and building tension.  If I hadn't bought the rest of this series at a discount I would have blotted this issue out of my memory and shut down this blog.

Posted by Count Drunkula at 7:12 AM