Birds of Prey #9 ties into the "Night of the Owls" event that touched all the Batman-family of books in April-May of 2012.  Rather than summing up the Court of Owls' deadly plot myself, I'll let Alfred Pennyworth explain it in his words, which, I guess, are Scott Snyder's words, really.

"To all the allies of the Bat presently in Gotham, I will send this with the greatest urgency. Tonight, the Court of Owls has sent their assassins to kill nearly forty people across the city.  The Court's targets are all Gotham leaders.  People who shape this city.  I have uploaded a list of targets' names, here.  The Court's assassins, the "Talons," are already en route to their targets.  They are highly trained killers with extraordinary regenerative abilities.  For many of their targets, I fear it may be too late.  I will keep the line open to the cave as long as I can manage.  Good luck to you.  God help us all." (Batman #8) 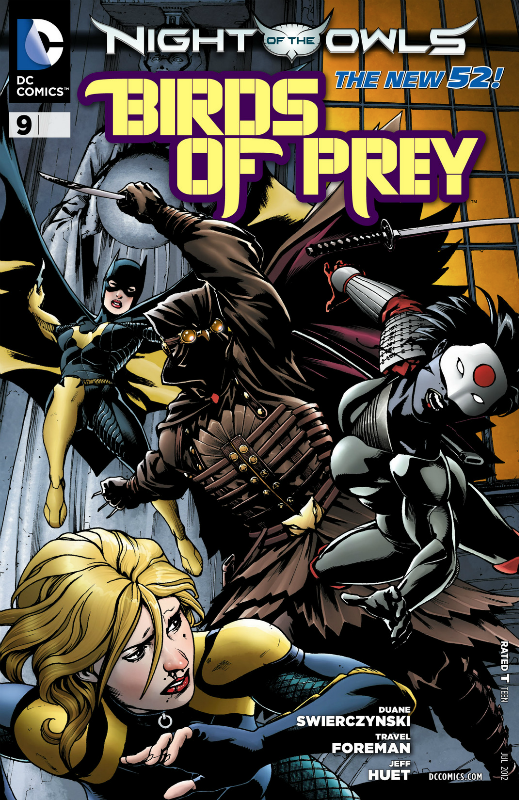 Birds of Prey #9: "Gangland Style" is written by Duane Swierczynski and welcomes a new art team onto the book: Travel Foreman on pencils, Jeff Huet on inks, Gabe Eltaeb on colors.  Jesus Saiz and June Chung provide the cover.

The issue opens in Gotham City, the year 1842, amidst what looks like a full-on gang war.  And then everyone's dead.  The street toughs are all wiped out by the Court of Owls' evil enforcer, the Talon.

Cut to present day Gotham, in medias res.  It's 8:20 PM on the Night of the Owls, which is now an official day on the city calendar, like Dia de los Muertos or something.  The Birds have already encountered one of the Talons, and they're not faring well. 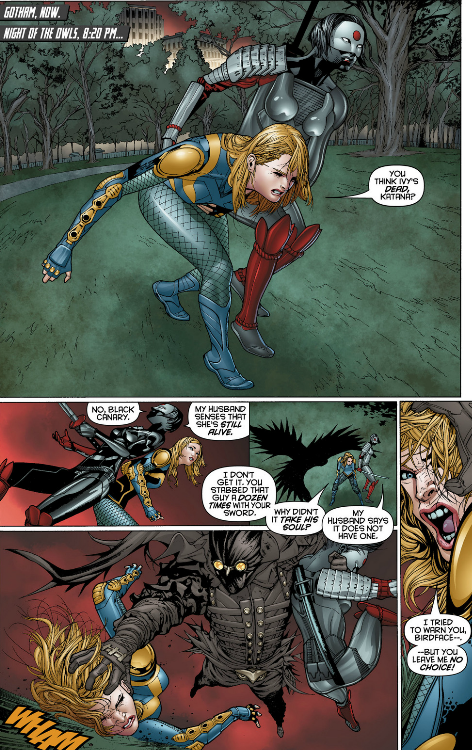 I thought Katana's husband could only speak with souls of the dead killed by her sword, so wouldn't he only sense if Poison Ivy was alive or dead if Katana stabbed her?  Or can her husband commune with any dead soul?

Anyway, Dinah uses her sonic scream on the Talon, which does jack all.  We get a glimpse into the Talon's mind and how he views his current situation.  This allows Travel Foreman to redesign the Birds in Victorian-era garb (Black Canary looks like Captain Crunch, Katana looks like a demon samurai, and Starling looks like, well, like Starling). 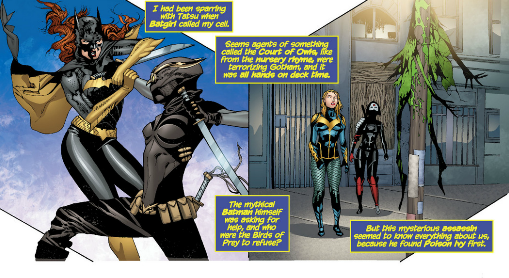 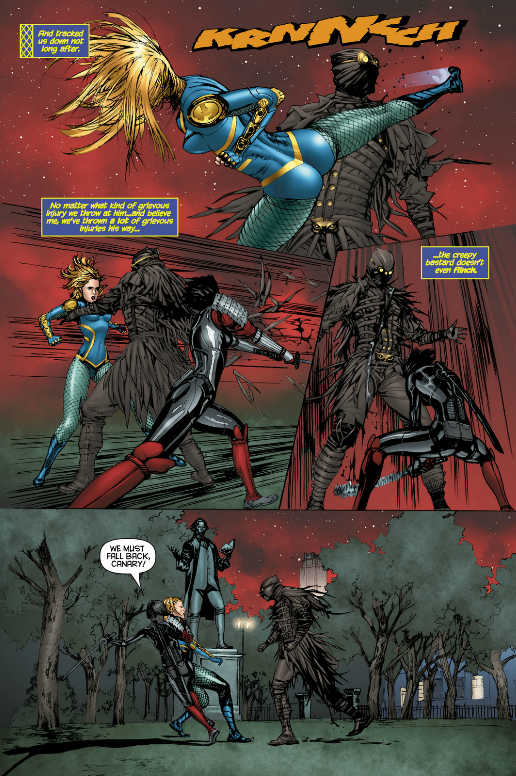 Waitaminute, waitaminute, waitaminute!  The Court of Owls dispatched their legion of assassins to murder "Gotham leaders… people who shape the city."  That's what Alfred said; that's what Scott Snyder wrote.  That was the mission statement given to all of the other writers in the Batman family of books.  Gail Simone, Kyle Higgins, they all followed that idea.

Duane Swierczynski…not so much.  Whereas Batgirl and Nightwing and everyone else went to protect Gotham citizens, y'know, like heroes do, the Birds are victims.  They're targets for execution.  WHY?  Why would Black Canary, Poison Ivy, and Katana be on the same list as the Mayor, city planners, religious leaders, and Commissioner Gordon?

The answer is Swierczynski doesn't know or doesn't care.  He isn't writing a "Night of the Owls" tie-in; he's writing a Friday the 13th movie for DC Comics.  Seriously, this issue is essentially an '80s horror movie, with the Talon standing in for Jason or Michael Myers or the Terminator, silently, relentlessly hunting a group of helpless young women.  Let's just acknowledge that and move on.

So Black Canary and Katana run to the same church that Dinah first fought the Cleaners in issue #1.  And just like that time, Starling drives through a door and a wall. 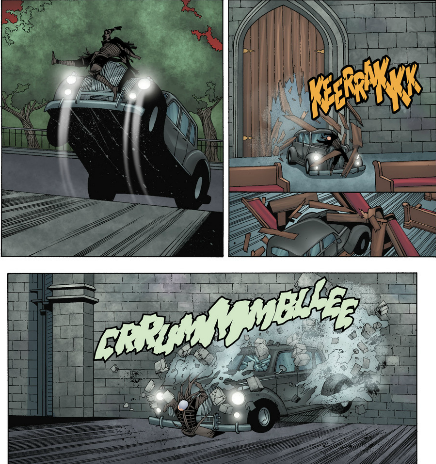 Seriously, how many times is she going to drive through a brick wall in a church?  Is that her super power?  Why isn't the car damaged?  Is it a super-car?  If I had a car that could drive through walls like that, I would never get out?

The Talon is not killed by Starling's Adamantium-Churchbuster-Death-Car, of course, and he gets his hand on her throat with the opportunity to kill her (pleasepleasepleaseplease).  But Batgirl swings down and saves her, because sometimes Batgirl is in this book.  Batgirl knows the trick to stopping the Talon is to freeze him, because she's been paying attention to the other comics.

The Birds lead the Talon to the train yard and throw him into a meat locker car.  Then Poison Ivy comes back. 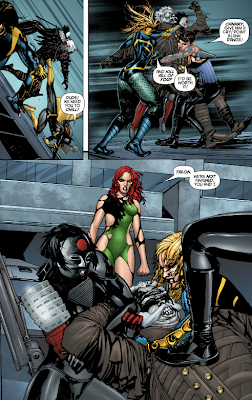 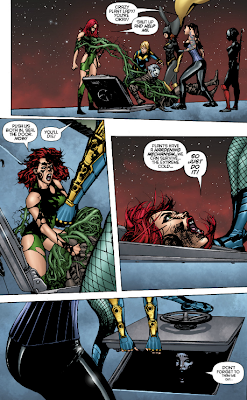 Ivy locks herself in the freezer with the Talon, claiming that she'll be able to survive the intense cold because of botany-science.  After that, Dinah tells the others that they're going on a trip to South America so she can fulfill her promise to Poison Ivy that totally won't backfire on them or anything.

I have complained a lot about the lack of characterization and consistency in this title.  How important concepts introduced in one issue fail to be addressed later on.  Well, this issue bucks that trend by having Dinah finally dwell on the pressure that her husband's murder has thrust on her.  And the horror that her allies may believe she was responsible for it, and maybe she was. 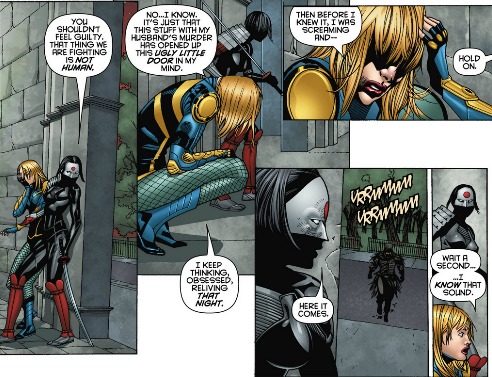 The problem is when Swierczsynski finally gives Dinah--and readers--a moment to acknowledge her past demons, it is completely inappropriate for the time and place!  Dinah's being hunted by a faceless, unstoppable killer, and the first chance she gets to catch her breath she starts crying to Katana about the dead husband that never seemed to bother her before.  You know who else has a dead husband?  Katana!  But slice-'em-up girl isn't crying about it; she's trying to keep them alive like Dinah should be doing!

Besides this out-of-place character moment, the issue is short on people, long on plot.  Like every issue of the series.

Thank you, Travel Foreman and the new art team, for allowing Poison Ivy to show a little skin and look a little sexy like she's supposed to for the first time in this series.  You know, before the plants shoot out of her chest again.

One of my other regular complaints with this series has been the amount of story per issue.  Given that these comics used to be 22 pages, and now they're 20, I would think the issue would feel crowded.  That's never been the case with Birds of Prey in the New 52, though.

The first three pages of this story are a prologue showing the Talon slaughtering a whole bunch of people we don't know or care about because it was 170 years ago.  I understand the intention is to show how dangerous the Talon is by showing how easy it is for him to kill a lot of dangerous men before turning him loose on our small band of heroins.  But the precious real estate of page space is wasted.

Page 1 is three panels.  Pages 2 and 3 are a double page splash of dead bodies we don't know or care about. 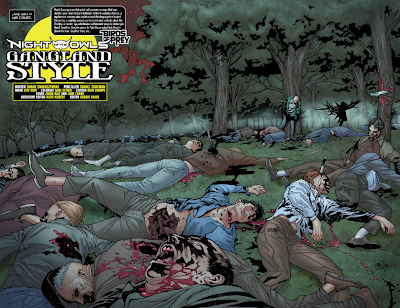 That's four panels in the first three pages.  Four panels to set the tone and the threat level of this story, but that leaves only 17 pages to tell an actual story.  Those three pages could have/should have shown the Talon killing a contemporary Gothamite and butchering his whole security team before turning his sights on the Birds who arrive too late to stop him.

So how do I feel about this issue?

First, when this issue came out back in 2012, I was thoroughly enjoying Snyder and Capullo's Batman.  It was a consistently great comic and one of my three favorite series out of the New 52 launch.  While I think eleven issues was too much for the opening arc, I really, really enjoyed the Court of Owls storyline.  I read a lot of the tie-ins and I thought they were pretty good.

And as a small cog of the greater "Night of the Owls" wheel, this isn't a bad story.  There are some inconsistencies and some faults, but there's also a lot of treats if you read it as an homage to horror movies like Halloween.  As such, I feel compelled to grade this issue on two different scales: as a part of "Night of the Owls" and as a part of Birds of Prey.

Posted by Count Drunkula at 6:49 AM