So far:
Batman stopped John Corben from killing Superman with a sliver of kryptonite.  In the aftermath, Superman discovered that Batman is Bruce Wayne, and Batman discovered that Superman is Clark Kent.  They agree to, if not work together, at least stay out of each other's way while they investigate the connection between Corben and Lex Luthor.  At the same time, Lex Luthor wanted Corben silenced, so his assistant, Mercy Graves, dispatched the Commander Blanx, an evil shape-shifting Martian.

Intercut with the fighting happening at Metropolis' SCU station house, Batman (Richard Armitage) sneaks into the LexCorp Factory.  He skulks around the sub-levels, and after some foot and electronic reconnaissance, he discovers Luthor has manufactured two dozen models of the construction drone that are designed for war.  He might also find the Metallo battle suit that Luthor showed Corben earlier.  He finds out that kryptonite is the energy source used for powering the suit and the war drones.

Meanwhile, back at the police station:

Commander Blanx (Thomas Kretschmann) reveals his true form, a pale-green alien form in exotic military regalia.  He has already killed John Corben's lawyer, a handful of police, and severely injured Captain Maggie Sawyer (Sabrina Lloyd).  He looms over Corben (Michael Biehn), who is inching away, looking for a weapon or a place to run.  Cops are storming into the hallway and stopping short at the sight of the alien creature. 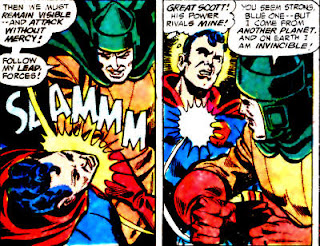 Superman gives Blanx one chance to surrender.  Blanx responds by hitting Superman harder than he's used to being hit.  Superman actually flies back into the far wall, narrowly missing the group of cops who have come upstairs to see.  Superman shakes it off and tells the cops to clear the building, then he flies at Blanx.

What follows is a massive battle between two "Alien Atlases".  Superman has strength and speed over Blanx, but the Martian has more deceptive fighting traits.  He uses illusion, disappearing, phasing through walls and floors, every trick in his arsenal.  The titans seem to fly and fight around Corben, with Blanx still trying to kill him and Superman trying to save him.  The station house gets wrecked, utterly trashed, while we actually see  Superman being super and saving people from the wreckage while he's fighting Blanx.  The real Dan Turpin (Mike Starr) lifts up Maggie Sawyer and carries her downstairs.

The fight ruptures a gas main.  Blanx uses his telepathy or illusion to trick Superman into using his heat vision, which sparks the gas.  The explosion badly scars Corben.  The fire, though, has a very different effect on Blanx, he shrieks and visibly cowers from it.  Superman notices that Blanx falls to his knees and seems to almost go in shock.  Superman puts out the fire with his freeze-breath.  When he looks back, Blanx is gone.

Outside the station, Superman confirms with Dan Turpin that everyone got out okay, except they can't account for John Corben.  Turpin tells him there was also a reporter named Clark Kent who vanished when the trouble started.

Here we've reached close to the end of Act II, and I know I'm missing something.  When I started this fan-cast posting, I said I had a vision for how the Justice League movies should go.  But in terms of story, I only had a couple sentences for each movie.  I had a loose idea of the structure, but I've been writing the majority of these 13 (so far) posts by the seat of my pants.

I have a lot of action and reversals planned for Act III, but I'm missing the turning point in the end of Act II.  The driving arc of this movie was supposed to be Batman coming to terms with his limitations as a human in the face of such god-like beings as Superman and the Martians.  Well, Superman and the Martians have begun to dominate this story, and I'm not sure how Batman will make his emotional arc.

So, I'm going to acknowledge that there is a big moment here that I don't have figured out yet.  This whole story I'm crafting isn't fully plotted out, so there are scenes missing and stories undeveloped, and I'm owning that right now.  I didn't write ten drafts of a Superman/Batman screenplay before I sat down to write this.  I had, like, a paragraph.

Posted by Count Drunkula at 1:35 PM