So far:
The evil Martian shape-shifter, Commander Blanx, tried to kill John Corben at the police station.  Superman arrived in time to save Corben, but not before the mercenary thief was badly injured in by a gas explosion.  In the aftermath of the fight, both Blanx and Corben managed to escape separately.  Meanwhile, Batman's investigation of the missing kryptonite led him to the LexCorp factory, where unmanned construction drones were being assembled in a joint effort by LexCorp and Wayne Enterprises.  Batman discovered that Lex Luthor was diverting money and resources to a side project: building armed drones designed for combat.

At the end of the second act, I need at least two more scenes.  One really quick scene of a weakened, badly scarred John Corben (Michael Biehn) tracking down Lex Luthor (James Nesbitt).  Corben waits with a gun for Luthor and Mercy Graves (Sanaa Lathan) in Luthor's limousine, fighting off the shock and trauma of his injuries.  Corben rightly believes Luthor sent an assassin to kill him, but Luthor has no idea about the shapeshifting creature that fought Superman.

Lex Luthor tries to buy Corben off, but the other man says there is only one thing he wants now:  Metallo so he can get revenge on Superman and Blanx.

The other scene I think we need is a sort of debriefing between Batman and Superman.  They both think Luthor sent another alien to silence Corben, but Superman doesn't know where this other being came from or how it got involved with Luthor.  Batman doesn't have an answer to that, and probably says he doesn't care.  He found evidence that Luthor violated the terms of their deal and is building war machines.  Maybe he found evidence of the kryptonite robbery, too, and plans to bring Luthor down in the morning.

Batman could be/would be very dismissive of this mysterious other alien that Superman fought.  This isn't Batman's problem to deal with.  Maybe this is how Batman's fear manifests in this act, and Superman calls him on it.  They could have a heated argument about these themes and go their separate ways.

The following morning, Lois Lane (Jennifer Carpenter) arrives at the Middleton Space Center.  She is let through the security gate and greeted by Doctor Saul Erdel (Bob Gunton).  She is shown around the facility, she views the Command & Control center where they monitor the space station and other deep space satellites and craft.  They pass by the medical wing where Lois observes at least one of the crew members from the space station in a hospital bed.

Doctor Erdel tells her the person to interview for a story in The Daily Planet is Commander Blake, but Lois asks if she can use the ladies room before they proceed.  Erdel, slightly annoyed, shows her to the restroom and waits patiently outside.

At roughly the same time in Metropolis, Bruce Wayne (Richard Armitage) and Lucius Fox (Ernie Hudson) storm into Lex Luthor's office in LexCorp Tower.  Along with a Bruce and Lucius are a few Metropolis police officers and some federal agents.  (Okay, I don't know anything about corporations or what, if any, federal agency would have over site over this particular matter, but Bruce and Lucius arrive with evidence that Luthor violated the terms of their contract to create weapons, and maybe evidence that Lex had the kryptonite stolen from S.T.A.R. Labs.)  Lex is shocked, outraged!  He bellows and hollers, while Mercy goes to the desk and makes a phone call.

Lex continues to argue with Lucius and the feds, decrying the "evidence" as doctored.  Bruce lets them do all the talking and, out of the corner of his eye, watches Mercy hang up the phone and go to a hidden safe in the wall.  From the safe she withdraws a small cylindrical canister, that we recognize as the same thing Commander Blake/Blanx put in the escape pods before crashing the space station.

A team of security guards enter the office.  Mercy orders them to restrain Bruce, Lucius, Lex, the cops and the feds.  Lex whirls on Mercy, further outraged as his own security guard grabs him behind the arms.  Mercy Graves opens the canister and a dozen Starro seeds fly out at the captives.

Before they reach him, Bruce lifts off his feet and kicks out, his feet slamming into Lex, knocking both of them and the guards holding them to the floor.  He looks up and sees a Starro attach itself to the back of a fed's neck.  More Starros attach to the cops and even Lucius.  Bruce elbows the guard who had been holding him and rolls across the floor, avoiding another guard.  He swats away a Starro just before it gets Lex.  He grabs Luthor and pulls him to his feet.

He and Luthor back toward the door.  Bruce grabs Lucius, who is still clutching at his neck where the Starro attached.  Then abruptly, Lucius grabs Bruce's wrist hard.  Lucius stands up straight and stares at Bruce with slightly glassy eyes.  "Call more guards to detain Bruce Wayne," he shouts.  Lucius begins to say, "He is Batman," but Bruce cuts him off before the last word is out by punching Lucius in the throat, apologizing as he does so.

Bruce takes one last look at Mercy Graves, who smirks with the knowledge Lucius' Starro sent her telepathically, then he pushes Luthor out of the office and the two of them run.  The guards, cops, and feds follow like mindless puppets under Starro and Mercy's control.

Cut back to Middleton Space Center.

Erdel is still outside the ladies room when he gets a call from a security guard at the front gate.  The guard tells him Lois Lane is here to see him, and we see that yes, indeed, Lois Lane is in her car at the main gate.  Alarmed, Erdel barges into the ladies room, finding it empty.  He tells the guard to send Lois through to the main building and then have her detained by more security.

And then, looking toward the bathroom mirror but really looking far, far beyond it, Erdel says, "Master, we have an intruder."  We see attached to Erdel's neck is a Starro seed.

In a different part of the space center, we see "Lois Lane" phase through a wall in the corridor outside the medical wing.  "She" then changes shape, becoming John Jones (Giancarlo Esposito).

Cut back to LexCorp Tower.

What follows is an intense action-chase scene where Bruce has to get himself and Luthor out of the building, while fighting off brainwashed security guards, but without tipping off his advanced combat training.  Luthor is not an idiot, of course, and, as shocked as he is by what happened in his office, he realizes that Bruce Wayne knows how to fight.  "I was a billionaire orphan at eight years old," Bruce explains.  "I had more kidnapping attempts by age twelve than you've had headlines in the news."

They get cornered and slip into an office on a lower floor.  Bruce does what he can to secure the door while Lex stands by the window.  Bruce asks Lex what he knows about those creatures, but Lex has never seen them before, nor does he understand what overcame Mercy and why she would betray him like this.  While Lex rants about it, Bruce opens a secret pocket under his shirt, withdrawing a communication device--the same he used to speak to Superman.  He also has a small sonic-emitter device.  He whispers, "Hope this gets your attention," and activates the sonic-emitter beside the communication device.  The pitch is too high for he or Lex to hear.

The guards begin kicking and pounding at the door.  Lex, having caught his breath and composure, smugly tells Bruce to open the door and he'll personally talk these treacherous security guards into letting them go.  Bruce refuses, saying their rescue just arrived.  "What are you talking about?" Lex asks, as a shadow falls over him.  He looks over his shoulder.  "No, not him!" he growls.

Superman (Jon Hamm) hovers outside the window.  He looks at Bruce, taps his ear, and mouths, "Can you turn that off?"  Bruce shuts off the sonic-emitter as the office door is kicked in.  A cadre of guards rush in.  Bruce pushes Luthor down behind the desk.  Superman uses his super-breath against the window.  It shatters and the wind and shards of glass force the guards back.

Bruce pushes Lex to the window; Superman grabs the two of them and turns around.  Another guard throws a Starro at Superman, but Bruce catches it before it attaches.  Superman flies them down to the ground.  The Starro struggles in Bruce's hand, and then begins to burn him, spitting a kind of acid-fire from its central eye.  Bruce bites back the pain until they're on the sidewalk, then he throws the Starro on the ground.  Superman cups his hands and breathes, freezing the alien creature.  Lex immediately claims the Starro for himself, saying it came from LexCorp Tower, making it his property.  The police respond and Bruce and Lex have them seal off the entire building because of a possible biologic contagion.

Lois Lane is surrounded by guards in the lobby of the space center.  She protests their aggressive treatment when Doctor Erdel enters with Commander Blake (Thomas Kretschmann).  "Miss Lane, I don't think you're just here to write a story about the space station, are you?" Erdel asks.  Lois reacts, not having a clue what the man is talking about.

Then, without warning, Commander Blake grabs her by the throat and pulls her close to him.  They're nose to nose.  His eyes flicker as he reads her mind.  He gets a mental image of Lois talking to "Detective Jones" after the Corben arrest.  For the briefest moment, he sees Jones in his true form. 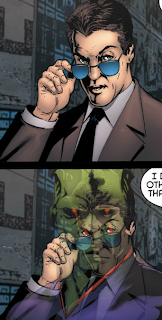 Blake releases Lois.  The guards grab her.  Fury and confusion overwhelm Blake as he rushes off down the hall.  Lois is freaking out.  Erdel stands in front of her and asks, "What did you tell the alien about us?"  Lois doesn't know what's happening and says she never told Superman anything about them.  "No," Erdel says, "the other alien."

In the medical wing, John Jones sits with the space station crew member who first observed movement at the edge of the solar system.  Jones talks the young man into a hypnotic stupor, then he reaches out with his hands and touches the man's head.  A flood of images and memories come to him, showing him what happened aboard the station, showing him Starro, and Commander Blake's treachery.

Jones breaks the psychic connection, breathing heavy.  He stands, spins around, coming face to face with Commander Blake, who says, "J'Onn… It's been a long time, my friend."

Posted by Count Drunkula at 8:45 PM