I haven't reviewed this series in a while--been caught up in fan-casting the DC Universe--but I need to get back in the routine of reviewing while I outline the rest of my Justice League movie series.  It's been well over a year since I read this issue of Birds of Prey.  I don't remember liking it much at the time, but maybe it holds up better over time.  Maybe… 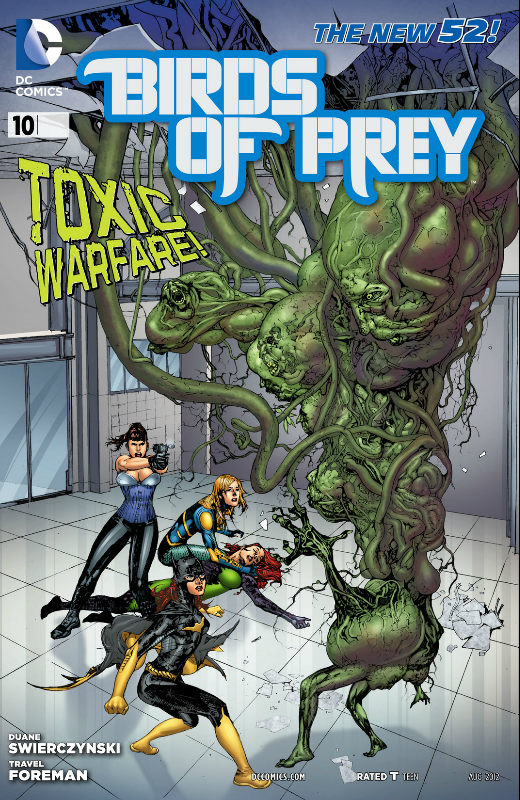 Birds of Prey #10: "Heat Seekers" is written by Duane Swierczynski with art by Travel Foreman and colors by Gabe Eltaeb.  Foreman and Eltaeb also provide the cover.  I have no idea of Eltaeb is his real name, but spelled backwards it does read "Beatle" for whatever that's worth.

The issue begins with the Birds riding in a private helicopter over the Amazon basin in South America. Starling chartered the ride, piloted by an old friend of hers named Leyden.  In the cargo/passenger hold, Black Canary, Batgirl and Katana ride with a container that looks an awful lot like a coffin.  And in the coffin is Poison Ivy, barely alive after she stopped the Talon last issue. 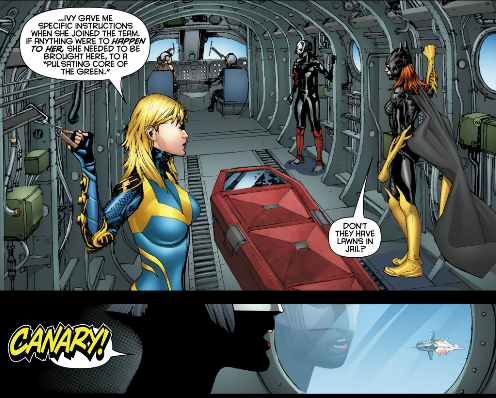 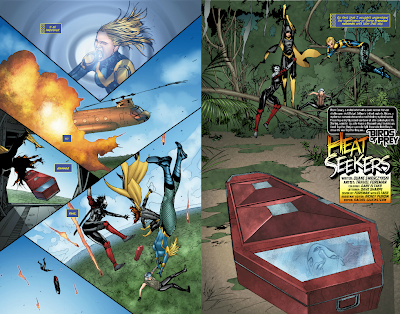 Yep, somebody launches a heatseeking missile at the chopper.  Everyone in back gets sucked out and falls hundreds of feet to the jungle below, where they all manage to land safely, without injury, even the pilot who goes down in the burning chopper.

They're not sure who tried to blow them out of the air; was it one of Poison Ivy's enemies or one of the people involved in the still-unresolved death of Black Canary's husband?  Canary is adamant about getting Ivy out of her coffin thingy so that the jungle can rejuvenate her.

We then flashback to Gotham City, two days ago, in the immediate aftermath of the "Night of the Owls" crossover, where the Birds got sucked into one of Batman's adventures, for no apparent reason. 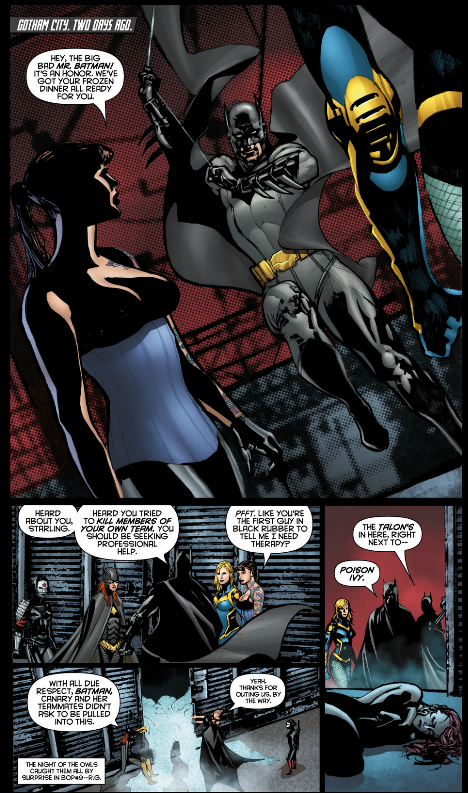 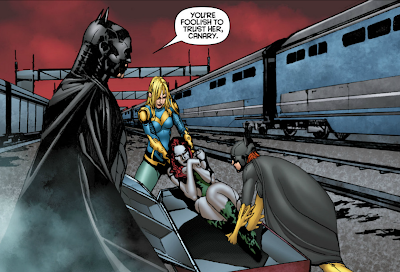 In the first appearance of Batman in this book that clings to the Batman family of comics for dear life, the Caped Crusader tells Black Canary that her choice in teammates is as laughably bad as, well, as I've been saying since issue #1.  He says Starling is a dangerous whack job and calls Poison Ivy a betrayal waiting to happen.  And when Dinah tries yet again to defend them, Batman says what we've all been thinking, but didn't want to admit. 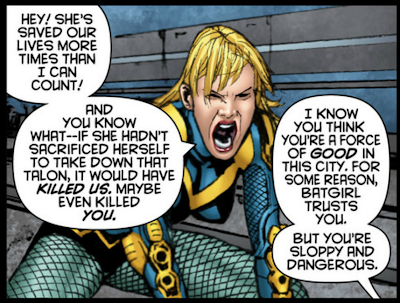 This single panel is heartbreaking, not just because it's the ugliest damn depiction of a supposedly attractive woman that I've ever seen in a comic, but because Batman's statement is painfully accurate.

Black Canary was Chairwoman of the Justice League of America a couple years ago, and while I never agreed she was the right person for the job, considering the Big Three were there, it at least paid respect to the character's history and credentials as a superhero.  In the New 52-verse, she has no credentials.  She's never been a Justice League member; they chose Element-Woman over her.  And as for her history, well, I would comment on that but we've never been told what it is.  Her involvement in her husband's murder no longer qualifies as a mystery; it's just bad storytelling.

Batman calls her sloppy and dangerous.  She is.  Batman, Batgirl, everyone says she's wrong to trust Starling and Poison Ivy.  She is at that, too.

Back in the Amazon, Starling saves her buddy, Leyden, and reveals that his helicopter was used to traffic liquid cocaine (but she's totally a heroic person worthy teaming up with Batgirl and Katana). Is that why somebody shot a missile at them?

Before that question can be answered, the ladies are attacked by plant Medusa monster creatures. 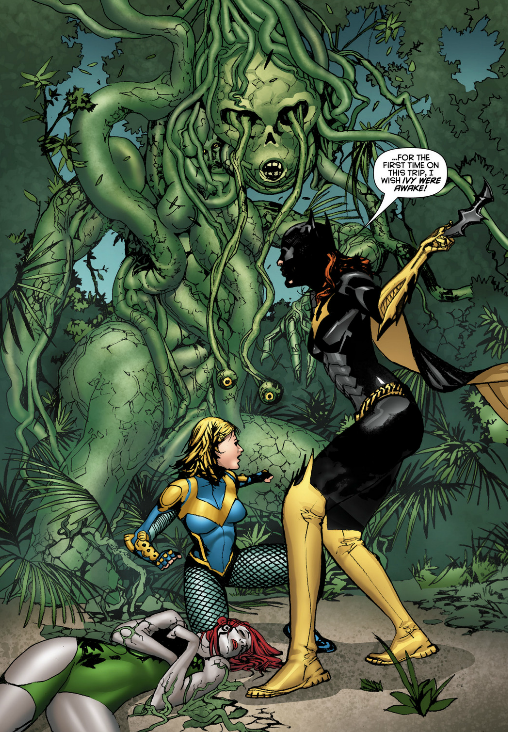 They blow up what's left of the helicopter and all the cocaine (aww!) and start running from the fire, which attracts further heatseeking missiles.  Seriously, who is firing missiles at them?  Katana gets her mad gardening on since none of the plant monsters have souls. 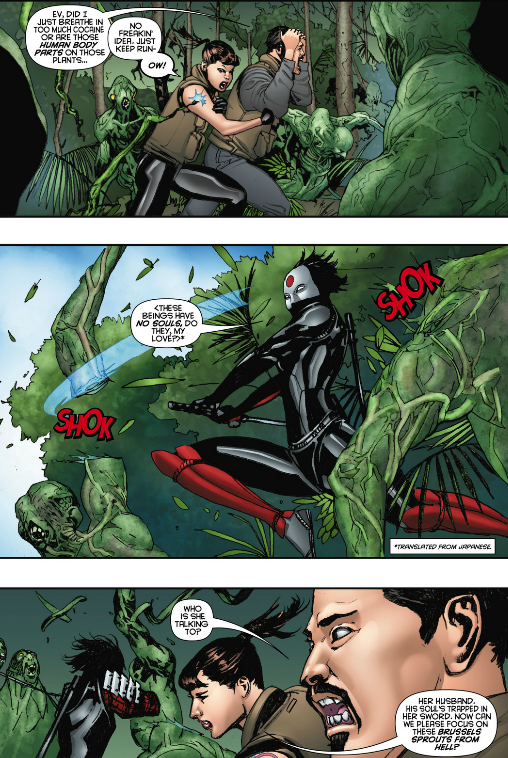 Leyden and the Ladies are chased through the jungle until they reach a sheer cliff.  The rope bridge extending from their side to the other has been cut and Batgirl's grapple gun doesn't have the range to get them over the gap.   They're trapped, about to die.

This is where Black Canary can show her stuff and save the day.

Unfortunately, where the exchange with Batman broke my heart, her heroic act at the end of the issue made me groan in disgust. 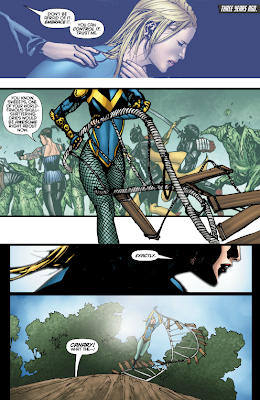 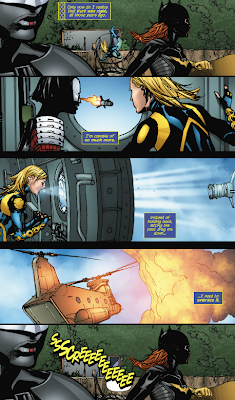 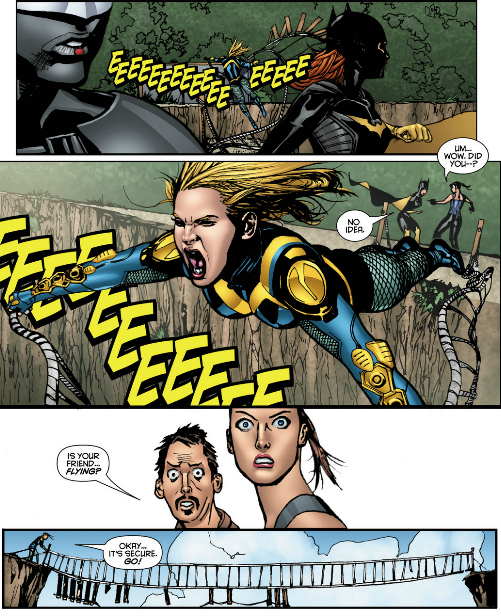 No, your eyes aren't deceiving you.  That's Black Canary flying in the page above.  She $@#%ing flies across the gap.  She uses her stupid sonic scream to stupid fly, because, hey, it works for Banshee and Siryn over at Marvel, why shouldn't it work for Black Canary?  Well, aside from the physics involved (or not involved), Dinah has never displayed this kind of power before, and it's a pretty significant power, so if she can use it, she better use it often.  It's like suddenly revealing that Aquaman can telekinetically control water; if you introduce that power once and never show it again, it's not really a superpower, it's just a deus ex machina. 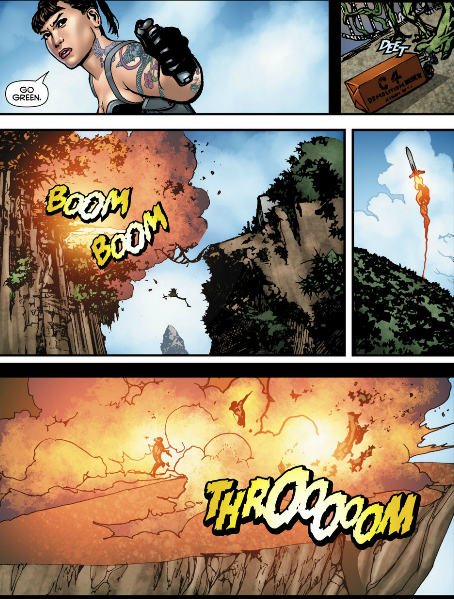 Because that's not dumb enough, Swierczynski piles on the bad storytelling by having Starling blow up the bridge after they get across, separating the ladies from the plant monsters chasing them.  Then another missile flies out of nowhere and blows up all the monsters!  Where are the missiles coming from and if they're heat seekers, why did they target the plant creatures which should have minimal if any body heat?

Also, basic storytelling tip: If Starling blows up the bridge separating the heroes from the monsters, then the heroes are safe and Starling gets the credit for being resourceful and smart.  But if the now harmless bad guys are immediately destroyed by unseen forces that could have destroyed them back when the bridge was still in tact, well, then Starling's act of clever heroism is moot.

The issue ends with Poison Ivy waking up, telling her teammates to enter the bunker on their side of the jungle where she'll explain everything.

We don't really learn anything new about the supporting characters, just Black Canary.  In any other case, that would be just fine with me.

We're told that Black Canary still thinks of her late husband, Kurt Lance.  We're also told/shown that Kurt pushed Dinah to embrace her sonic scream and test its limitations.  This allowed her to detonate the first missile before it struck the helicopter, and this allows her to fly when she needs to get across the gap in the issue's climax.  As such, this makes me hate him, because these forced changes to her power set are more off-putting than anything.

I don't need Black Canary to have a super power.  I'm fine with her being one of the five or ten best hand-to-hand combatants in the world.  But if they want to give her a metahuman ability to shatter stuff with her scream, okay, fine, whatever.  But to elevate the power to this degree to me feels closer to the electric blue Superman.

This series has not been flattering to Black Canary, but this issue kicked her in the stomach by having Batman rightly characterize her as incompetent and foolish, and then giving her a stupid gimmick power that will never come back again.

I like Travel Foreman's art on some comics, but not on this one.  This series has nothing going for it other than the gimmick of a bunch of sexy ladies doing espionage stuff.  For that you need a more mainstream artist with a style that shows off cheesecake and the female form.  Foreman's art lends more toward the heroic, which kind of works for the plant monsters, but not enough.

Overall, everything about this issue was a little better than what we've been seeing in the series lately, but the blows done to Black Canary are crippling.

Posted by Count Drunkula at 6:41 AM