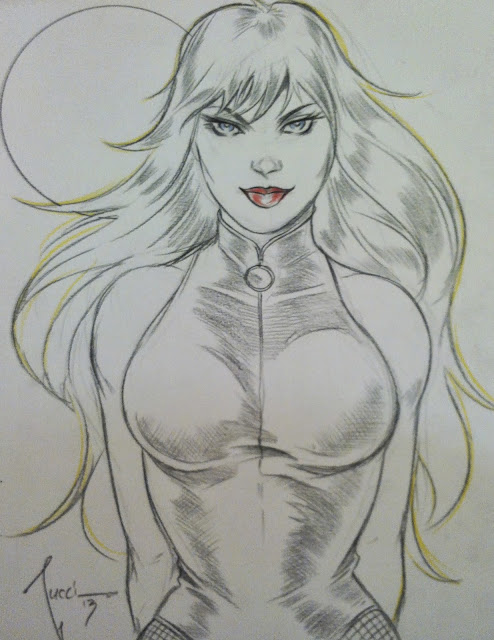 This gorgeous sketch of pre-Flashpoint Black Canary was drawn for me by Billy Tucci this past Saturday at Granite State ComicCon in Manchester, New Hampshire.  Tucci, a regular cover artist for DC and Marvel, is the creator of the comics character Shi.

I attended GraniteCon mostly to meet Ethan Van Sciver and track down some back issues of Action Comics Weekly which featured Canary, but I didn't have any custom convention sketches lined up, nor did I foresee getting any from the name artists in attendance.  I assumed Van Sciver's price for anything more than a head shot would be more than I was willing to pay, and the problem with a Black Canary head shot is it looks like any blonde haired woman.

As I made my way to the far end of Artists Alley, I came upon a veritable wall of full-color sketches of beautiful women done by Billy Tucci.  His wall included multiple sketches of his creation, Shi, as well as DC and Marvel women such as Wonder Woman, Harley Quinn, Spider-Woman, and others.  He also had two books of prints and sketches, one of which had a Birds of Prey print with Black Canary, Huntress, and Lady Blackhawk.

Tucci was charging $100 for full-color/full-body commissions and $40 for simple head shots.  The longer I stared at his wall of female beauties, the more I knew I wanted an original Black Canary sketch  from him.  Again, though, a simple head shot wouldn't be enough.  I offered him an extra $20 to draw a little more of her torso and he was really cool with it.  He knew as soon as I requested Black Canary that he could add more of her body to show off her costume.

He told me to come back in half an hour, and when I did, I was floored by what the artist had produced--and by what I assume my extra twenty bucks merited! 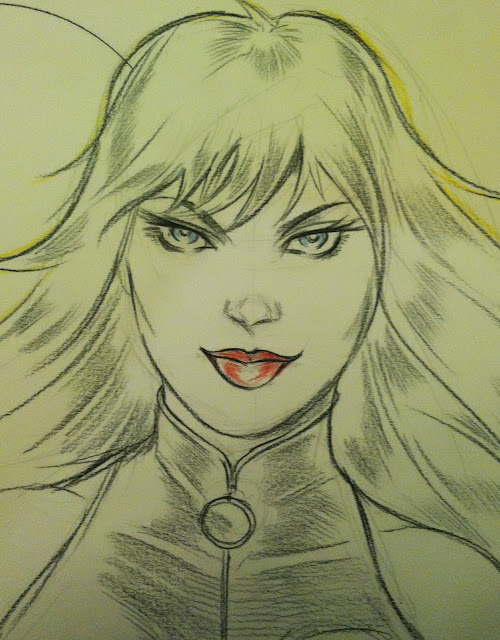 He was just putting the finishing touches on the sketch when I returned, but before he finished, he took out his colored pencils to give her some color highlights: red lips, blue eyes, and yellow outlines around her hair!  I'm not sure how much the colors will pop on this blog, but take my word for it--they're great!

But quite possibly my favorite part of this image is the very bottom. 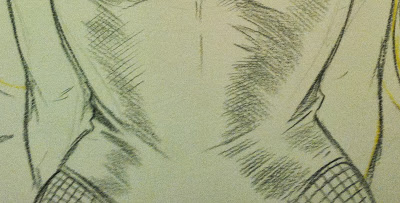 It would have been so easy for Tucci to draw a simple bust that stopped at Dinah's mid-torso; he could have done that sketch, and I would have been happy to get it.  But he went down to her hips to show her fishnets!  Hell-to-the-yeah, Mister Tucci!  Fishnets are the defining part of Black Canary's costume and that little detail makes this already awesome sketch even greater!

Posted by Count Drunkula at 6:50 AM