We move from a three-shot of Batman, Superman and Lois Lane outside the Middleton Space Center to a montage of quiet, somewhat slowed down shots revealing the aftermath of the robot attack on Metropolis. 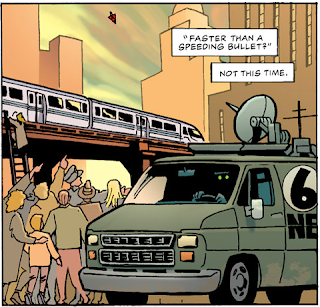 We see people tentatively coming out of their homes or buildings, surveying the devastation, and looking up at the sky as if for answers.  Police and firefighters help people trapped under debris.  Jimmy Olsen finally puts his camera down to console a frightened kid.

We see rows of hospital beds with people lying on the fronts or sides.  Each of the people in bed has a starro implant on his or her neck.  A team of doctors and nurses in hazmat suits attempt to remove one of the starros surgically.  It's not going well.  They shake their heads in frustration.

We see Bruce Wayne (Richard Armitage) walking beside a medical gurney which carries Lucius Fox (Ernie Hudson) toward the Wayne Enterprises private jet.  A trio of nurses and medics push the gurney.  We see the jet take off and leave Metropolis.

Running over these images is a monologue spoken by The Daily Planet Editor-in-Chief, Perry White (Tim Matheson).  Perry gives us numbers for the dead and wounded, the collateral damage to property and infrastructure, and recounts the tales of heroism, not just from Superman, but the everyday citizen, in the face of inexplicable horror.

He ends the monologue saying, "Your name is all over this mess, Mister Wayne," and we cut to inside Bruce's private jet.  Perry White is on speaker phone.

Perry (phone): "You may own this paper now, sir, but if you think for a second that I won't pursue this story every bit as aggressively as--"
Bruce: "Stop there, Perry.  If you soften your coverage of this horrible tragedy at all, if you hide anything to help me save face… I'll fire you."
Perry (beat): "I'm glad to hear that, Mister Wayne."
Bruce: "My press office will release a statement later.  After that, if you need any further statements, have Clark Kent call me."

Cut to the LexCorp Factory.

Lex Luthor (James Nesbitt) watches a group of technicians tend to John Corben (Michael Biehn).  They use a jaws of life-like device to remove the chest plate from the Metallo armor.  There is a medic there, telling him Corben is alive.  Luthor doesn't care; he's far more interested in the kryptonite, shards of which are imbedded in Corben's chest, heart, lungs and throat.

We hear Clark Kent (Jon Hamm) and Bruce Wayne speaking over the end of this scene, as Luthor turns around to take in the damage done to his factory during the the battle.

Clark states the obvious fact that Luthor built the combat drones in violation of his contract with Wayne Enterprises.  Luthor also built the battle armor and had Corben steal the kryptonite from S.T.A.R. Labs Gotham.  Bruce tells him none of that will hold up.  Luthor is protected by Mercy Graves' treachery.  Every illegal thing Luthor did can be laid at the feet of his shape changing alien secretary, who has vanished.

Cut To: The Kent Farm, Smallville.

Clark Kent sits in the kitchen of his parents' home.  The robot attack is covered on the TV news in the background.  Martha Kent (Candice Bergen) squeezes her son's hand.  "The news is saying some horrible things about Bruce Wayne," she says, "but I can't say an ill word about him.  Did you hear what he did?"

"Not just that," Martha says.  "He picked three farms at random and paid off the existing mortgages.  We own the farm now, Clark."  Ma Kent beams, overwhelmed with pride.  Clark is stunned.

He steps out onto the porch where Jonathan Kent (Robert Forster) stares out at his fields.  Pa Kent says, "I guess I'll be able to afford some more help around here now."

Clark smiles.  The smile fades.  "You know I'll visit you every chance I get," he says, as Martha joins her husband and son on the porch.  "But I think I'm going to be busy for a little while."  Clark's parents, with arms around each other, exchange a knowing, troubled look.

Cut To: The Batcave

The extra crispy body of J'Onn J'Onzz (Giancarlo Esposito) lies on a table in the Batcave.  Superman and Batman stand over the body.

Batman: "Are you a Martian?"
Superman: "No."
Batman: "Would you submit to a few tests to prove it?"
Superman: "What are you going to do, shoot me with a flame thrower?"
Batman: "Not now." (walking away from J'Onn) "But you understand the concern."
Superman: "I told you where I'm from."
Batman: "A planet no one's ever heard of, and you just happen to look human."
Superman: "You're going to have to trust me."
Batman: (unintelligible grumbles)
Superman: "I didn't hear you."
Batman: "I do trust you."
Superman: "I know, I heard you the first time. I hear everything.  But it doesn't explain why you gifted my parents their farm."
Batman: "When I found out who you were, I couldn't comprehend someone with your powers needing to hide his identity.  Then I found out about your parents."

Batman looks away, remembering Thomas and Martha Wayne, remembering how he saw them in Bel Juz's psychic attack.

"My parents aren't a weakness, Bruce," Superman says.  "They're my strength.  Just like yours." 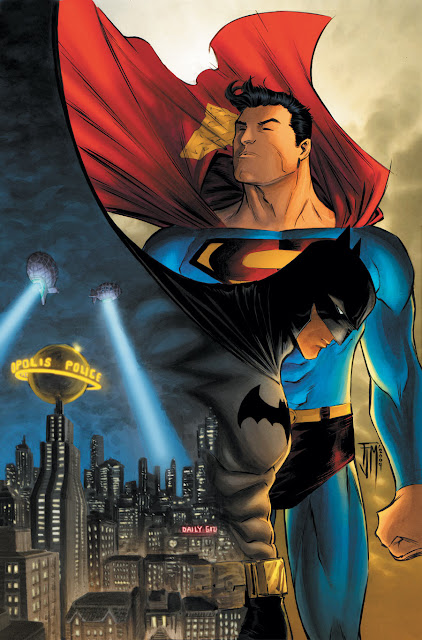 Batman calls up a map of the Earth on the computer.  There are several targeted locations on the map representing the places where the space station's escape pods touched down.  They agree that every one of the pods might have contained starro creatures that escaped to infect indigenous populations before Superman recovered the pods.

"This is big," Superman says.

Batman taps a button on the computer.  The map of the Earth is replaced by multiple images and videos of other superheroes.  Wonder Woman.  Aquaman.  Green Lantern.  The Flash.  The pictures and videos are of different quality--mostly security camera or smartphone--and some are just headlines in tabloid magazines.  But we know who they mean.

Batman says, "We could use some help."

Pull back on Superman and Batman studying the others and--

That was the last scene of this movie, but you may not have read the first scene yet.  If you've been following this story for the last three weeks, please go back and check out Parts 1 and 2 again because I have rewritten the opening of World's Finest.  It now features a prologue showcasing the iconic origins that our two heroes deserve.

Posted by Count Drunkula at 9:58 AM