Lois Lane was saved by the Martian, J'Onn J'Onzz, who warned her of an imminent alien invasion.  Batman and Superman pursued Mercy Graves to the LexCorp Factory.  There, Superman was ambushed by John Corben wearing battle armor powered by kryptonite which is poisoning Superman.  Mercy revealed to Batman her true self, a Martian named Bel Juz, and sent a dozen combat drones to wreak havoc in Metropolis.

Bel Juz (Sanaa Lathan) steps back, regarding the Caped Crusader with new interest after he fights through her psychic attack.  She admits to being impressed.  Batman (Richard Armitage) palms a small remote control device and tells her to hold that thought.  Abruptly, the computers that Bel Juz used to program the drones, as well as the tablet in her hand, flash red with a warning: NEW PROGRAM UPLOADED.  "What have you done?" she hisses.

"You got the program codes from Lucius Fox," Batman says.  "He got them from me."

At once, the other construction and excavation drones, some of them unfinished, come alive.  The nearest one grabs Bel Juz with heavy mechanized clamps.  On the other side of the assembly line, John Corben (Michael Biehn) is about to pull Superman's arms off.  He taunts Superman (Jon Hamm), describing what he'll do with the Man of Steel's body when he's finished killing him.

A construction drone swings a heavy pneumatic hammer into Corben's side, throwing him into two other drones who clamp down on Corben's armor.  Superman falls forward on his hands and knees.  Blood drips from his mouth, nose, maybe even his eyes.

"On your feet, farm boy," Batman calls to him.  He sits at the computers and taps away at the keyboard.  The two drones holding Corben slam a sheet of lead on his armor over the kryptonite chamber.  One of the drones begins soldering the lead over the kryptonite as Corben snarls and struggles.  Metallo's weapons suite kicks in and dismantles the two drones.  The lead sheet is only partially attached to the armor.

Superman stands up.  His eyes burn as a heat vision blast fuzes the rest of the metal, covering the kryptonite.  Corben barely has a moment to voice his outrage before Superman runs up and punches him in the face.  Corben crashes through some more machinery.

Bel Juz breaks free of the construction drone holding her.  She leaps at Batman, her arms change shape to amorphous green hammers and crush the computer bank that was controlling the drones.  Wild, she hisses and goes for Batman.  Before she reaches him, Superman burns her with heat vision and throws her against the wall.

Batman picks up the tablet and runs diagnostics on the combat drones.  He tells Superman he didn't have time to reprogram them; Superman is the only one who can shut them down before they take anymore lives.

Superman: "I'm on it.  Just needed to catch my breath."
Batman: "Don't stop to sunbathe this time."

Superman begins to take flight, hovering ten feet off the ground.  He points to Bel Juz, who is getting back on her feet.  He tells Batman that Bel Juz looks like the thing he fought last night at the police station, and he thinks fire might be the key to slowing her down.  Then he's up, up, and away!

Batman turns and squares off with Bel Juz.  He presses a button on the tablet.  Two construction drones nearest Bel Juz activate their cutting torches.  She curses Batman and runs, phasing through the wall.  From behind Batman, Corben breaks through the wreckage of broken factory equipment and drones.  He howls, echoing the curses Bel Juz said.

Batman fires a taser into Corben's armor, says something like, "Stay out of Gotham," and a surge of electricity courses through the Metallo armor, frying its circuits.  The kryptonite chamber explodes, sending shards of the alien meteorite into Corben's chest, lungs, and heart.  He drops, unconscious.

Superman makes the short trip from the industrial district to Downtown Metropolis.  He can hear the screams of fear and pain as the combat drones target civilians and buildings.  People in bumper-to-bumper traffic abandon their cars and race down the street as a drone unloads armor-piercing shells into cars, vans, streetlights, everything.  A woman, trapped in her car, looks out the cracked windshield as the drone squats down to execute her.

Almost faster than the eye can see, Superman flies--fists forward--straight through the drone, leaving a giant hole in the center of the machine's chassis.  It sparks and dies. 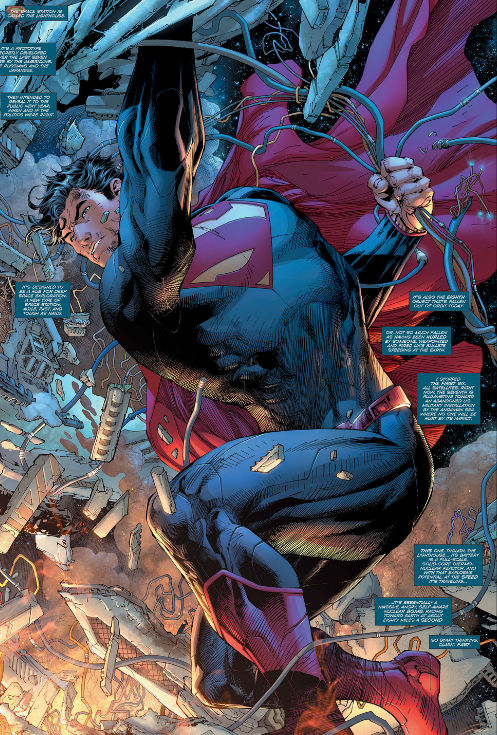 Across town, Detective Dan Turpin (Mike Starr) and a handful of SWAT Team members are doing their pitiful best to hold off another drone.  Superman swoops by at blazing speed, grabs the drone by the arm or leg, and carries it off.  In one seemingly-fluid move, he spins like a discus thrower and tosses the robot at yet another combat drone down the street.  They slam into each other with enough force to shatter into pieces.

Commander Blanx (Thomas Kretschmann) is burnt and pissed off.  He uses the communication device we first saw him using to contact "Mercy Graves" back in Part 6.  This time, Bel Juz's face appears in the screen.  We have no sense of place for her, but she looks as furious as Blanx.

He tells her J'Onn J'Onzz is alive on Earth and here at the Middleton Space Center, attempting to warn the humans of their plan.  Whatever he does will be too late, Bel Juz tells him, but Blanx snarls that he wants J'Onn dead.

Bel Juz sighs with the weight of a heavy decision.  "Very well," she says.  "Fulfill your mission, Commander, knowing I recount your glory when the Master arrives."  End communication.

Back in Metropolis, Superman rips the leg off one of the drones and then proceeds to beat the robot to pieces with its own appendage.  Outside the Daily Planet, Jimmy Olsen (Kevin McHale) is running against the crowd to get pictures of the action.  He crouches down behind cover and frames the iconic shot: Superman lifting a car over his head and throwing it down into one of the drones, as an homage to the cover of Action Comics #1.

Batman calls Superman from the cockpit of the Bat-plane or Batwing.  We intercut between Batman piloting the craft away from LexCorp to shots of Superman punching and kicking another drone or two.  Batman says he's tracking the remaining drones and two of them have peeled off and are heading away from the city.  He can't shut them down electronically, but he's pursuing them.

Superman asks where they're going.  Batman reads their trajectory.

In the C&C of the Middleton Space Center, J'Onn J'Onzz (Giancarlo Esposito) is at a computer beside Lois Lane (Jennifer Carpenter) when Commander Blanx phases through the floor/computer and hits J'Onn in the face, then grabs him and pulls him forward, smashing his head into the computer.

J'Onn and Blanx engage in a savage, unrestrained battle.  Each of them, at times, changes into inhuman monsters for physical or tactical advantage.  Lois is mostly an astonished bystander.  Maybe she tries to help J'Onn, which only puts herself at greater risk, forcing him to fight harder to save her.

In the sky above the space center, Batman follows the two rogue drones in the Bat-plane.  One of them stops in mid-air, turns around and fires rockets at the Bat-plane.  He evades the rockets, deploys counter-measures, you know, all the standard dogfighting maneuvers, before shooting down the drone that attacked him.

The last drone lands outside the space center and opens fire on the facility with a barrage of missiles.

Inside the C&C, Blanx has J'Onn beaten, when the wall behind them simply explodes.  Blanx looks around in surprise, and J'Onn kicks him directly into the path of a fireball.  Blanx goes up in flames and drops.

Lois screams as the wall collapses and the ceiling begins to cave.  J'Onn runs to her as the room ignites.  Fire all around, he drops to his knees.  In agony, he crawls toward Lois.  She watches him come for her, even as fire overtakes him.  J'Onn's hand reaches for Lois, a mere foot away.

Outside, the combat drone continues to fire on the building.  Batman locks target on the robot, about to blow it to hell, when the Bat-plane is actually rocked off course by the wake of Superman's flight.

Superman lands right on the drone, driving it straight into the tarmac.  Then he kicks up and leaps into the building, crashing through the wall of the C&C.

He scoops up Lois in his arms and carries her out of the building where the Bat-plane is landing nearby.  Scientists, technicians, crew, everyone who was inside the space center is evacuating, but when they see Superman and Batman, they run in the other direction.

Lois frantically pleads with Superman to go back inside and save the Martian.  "Another one?" both men ask at the same time.  Superman rushes back inside.  Lois is just barely keeping herself from both hyperventilating and bawling her eyes out.  Her face is smudged with soot, her clothes singed.  Then she seems to notice the man standing next to her.


Superman puts out the fire in the C&C and emerges, holding the charred body of J'Onn J'Onzz.  The Martian is curled up in a fetal position, his skin black as volcanic glass.  He looks like petrified wood.

"He's alive," Superman says.  "I can still hear a heartbeat."

The three of them, Batman, Superman, and Lois Lane, stare at the body of the Martian for a long silent moment.

Posted by Count Drunkula at 3:20 PM