The Brave and the Bold #61 pairs Black Canary with Starman in "Mastermind of Menaces" written by Gardner Fox with art by Murphy Anderson. 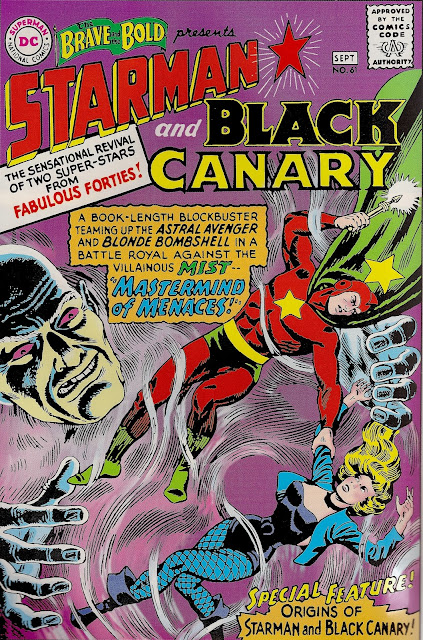 That cover has a lot of text!  It calls both heroes "superstars from the fabulous forties".  At the time this comic was published in 1965, Black Canary and her Justice Society comrades had appeared a handful of times in the pages of Justice League of America.  She was part of the Earth 2 cast, however, and only appeared when the League would crossover into the parallel Earth of the Golden Age heroes. 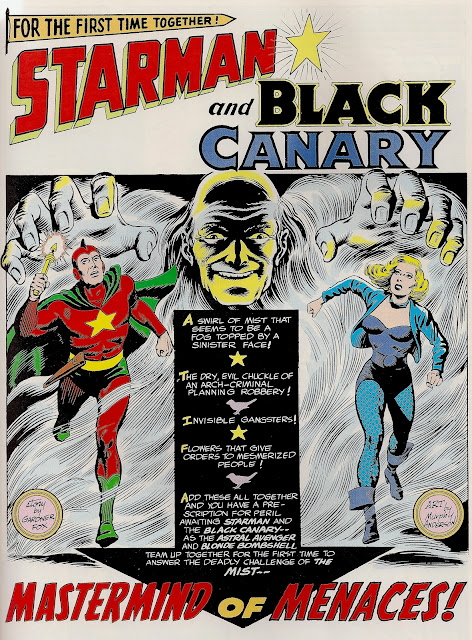 I love this title page, with Starman and Black Canary running away from the whispy, outstretched hands of the villainous Mist.  The banner declares, "For the first time together!"  This couple would team up again in the very next issue, and both stories would be the focus of a retcon in Starman Annual #2 published thirty years later. 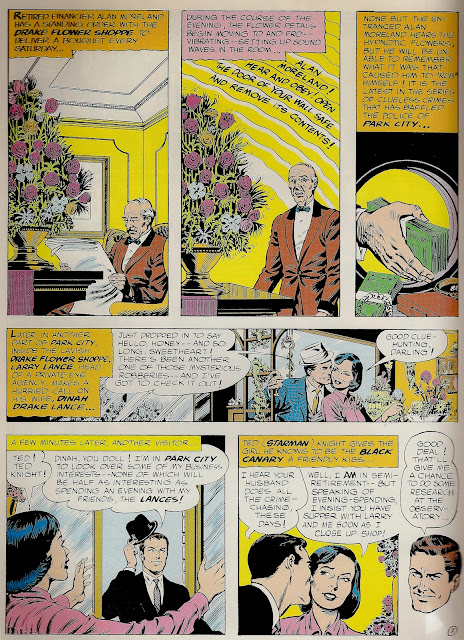 After a mere three panels to set up the mystery, Fox and Anderson introduce us to all three of our heroes, Dinah Drake-Lance and her husband Larry Lance, as well as the visiting Ted Knight.  Note the locations referenced in this first page.  This isn't Sherwood Florist that Mike Grell created for The Longbow Hunters, but the Drake Flower Shoppe.

The semi-retired Canary and her husband are also said to be working out of Park City.  I'll have to go back through her early appearances in Flash Comics, but I don't think Park City was ever used as her hometown or base of operations.  I think Gardner Fox made it up for this issue.  As a fan of both world-building and keeping Black Canary out of the shadow of Batman and Green Arrow, I like the idea that she might've had a Metropolis of her own to patrol. 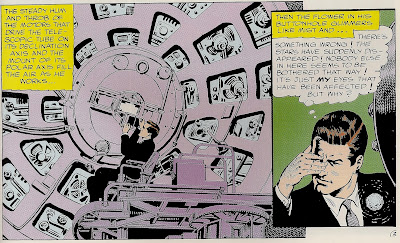 When I think of my favorite comic book artists, I don't usually think of Murphy Anderson.  There's nothing wrong with his art--quite the opposite--but I just haven't seen enough for him to climb onto that favorites list.  The two panels above, however, have made me a fan of his for life.

I don't know if he concocted the workings of the telescope from his own mind or he was drafting something from life, but it looks incredible in scale and detail.  Contrast that image with the closeup of Ted and the tension in his forehead.  Again: incredible! 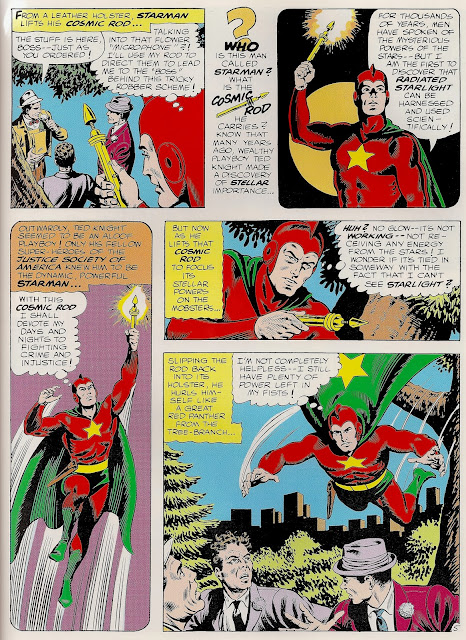 If I was a younger, more crass man, I would never stop laughing at Starman's "Cosmic Rod".  I mean, seriously! 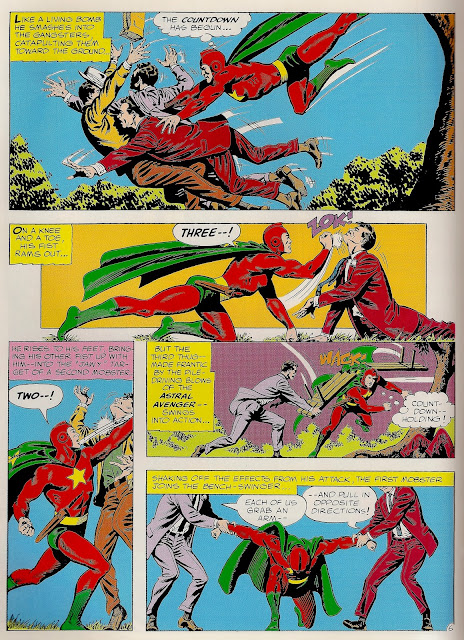 Starman fights the goons, getting the upper hand.  Then, however, sound waves emanate from the flower on of the goons' lapel.  The effect disorients Starman, giving the bad guys time to escape.

We then find the titular Mastermind of Menaces himself, the Mist, waiting for his minions to report.  He is less distraught over the unexpected appearance of his nemesis Starman than he is curious as to why Starman didn't use his Cosmic Rod to defeat the goons. 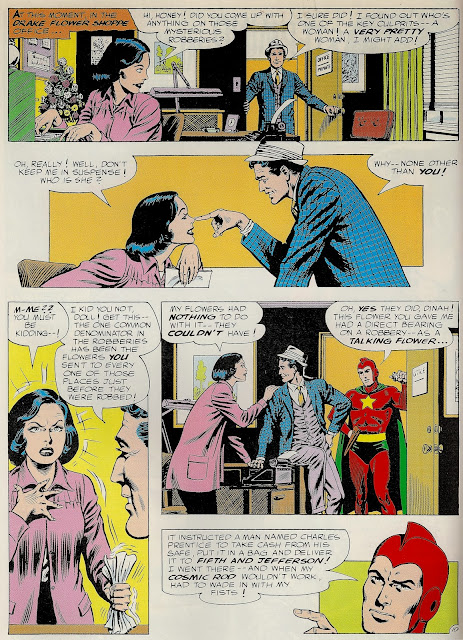 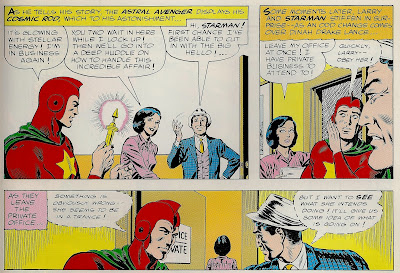 Starman uses his Cosmic Rod to make the wall transparent (It can do that?!) so they can spy on Dinah.  As if in a trance, she reads a list of wealthy customers who are receiving flower deliveries from her shop that day.  Unbeknownst to her, she has been brainwashed by the Mist, who listens in and determines which of Dinah's customers to rob.

At about the same time, the Mist realizes why Starman's Cosmic Rod didn't work earlier.  The sound waves from his flower combined with the noises in the observatory created a specific frequency that prevented starlight from charging the Cosmic Rod.

... Man, I wish I could've taken a science class during the Silver Age...

Anyway, Starman and Larry surreptitiously snap Dinah out of her trance and explain how she'd been used as an unwitting accomplice without tipping of the Mist that they're onto his plan.  Dinah Drake-Lance is furious about being manipulated.

Thus, the Canary semi-comes out of semi-retirement. 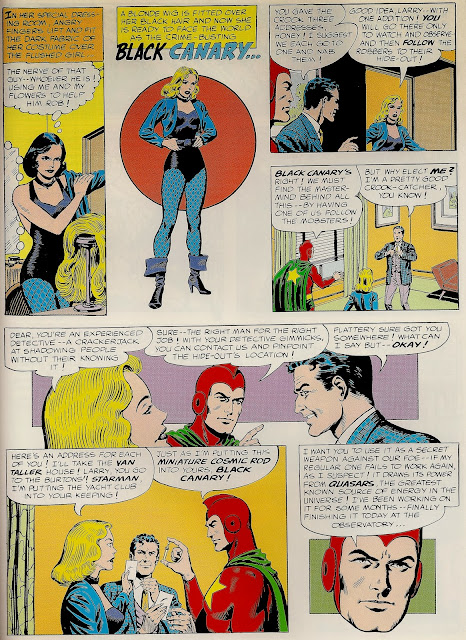 Maybe I am that young, crass man after all, because after I read "I'm putting this miniature cosmic rod into yours, Black Canary" I had to put the book down and leave the room.

Back to the story.  A trio of the Mist's minions enter the home of Freda Van Taller, who has been entranced by the flowers to leave her valuables out in in the open.  The goons have been coated with the Mist's special chemicals so they are invisible.

Black Canary arrives and hears the criminals moving about even though she can't see them.  She breaks a capsule of red powder into her palm and blows the dust into the room.  The dust coats the invisible crooks, giving her visible targets and she springs into action. 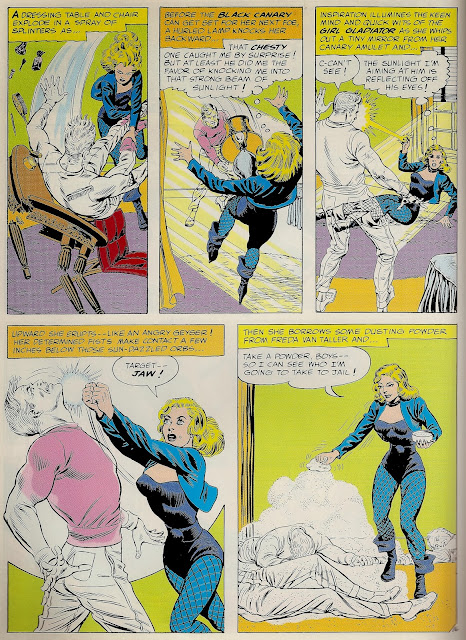 Meanwhile, at the Park City Yacht Club, the Mist's voice commands his latest victim to place valuables into a model viking ship and set it adrift in the water.  A helicopter piloted by more goons picks up the viking ship, but Starman takes to the air in pursuit.  Starman uses the Cosmic Rod to deflect their bullets back at the helicopter, thwarting their plan.

At the same time, Larry Lance follows his targets back to the Mist's hideout.  He transmits the location to the others, but not without his presence being noticed. 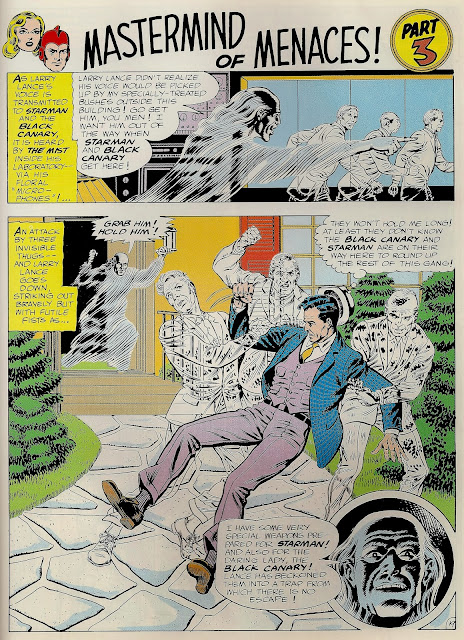 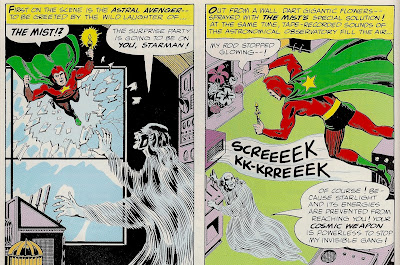 With the absurd combination of frequencies negating the power of the Cosmic Rod, Starman crashes to the ground and is captured by the Mist's invisible cronies. 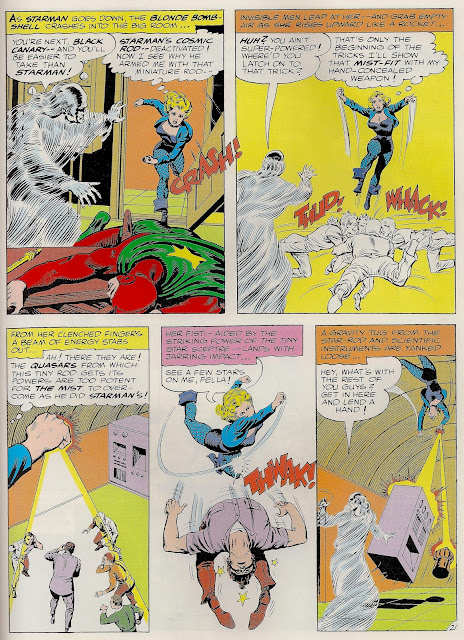 With her miniature Cosmic Rod (tee-hee-hee), Canary lifts all of the scientific gadgets and computers in the Mist's array and drops them like cartoon anvils on the crooks.  She then targets and destroys the flowers he used to incapacitate Starman, but then the Mist activates the room's defenses. 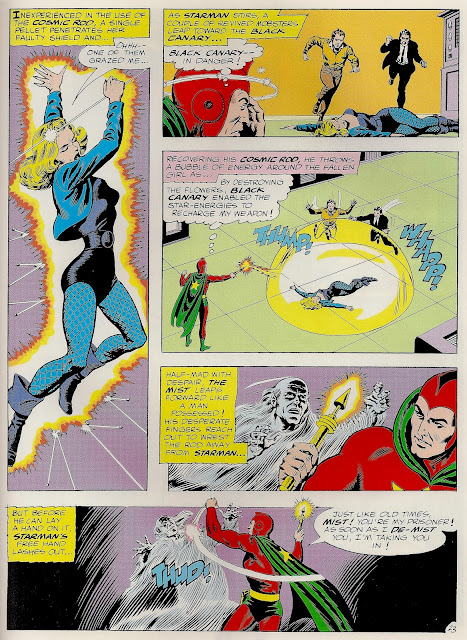 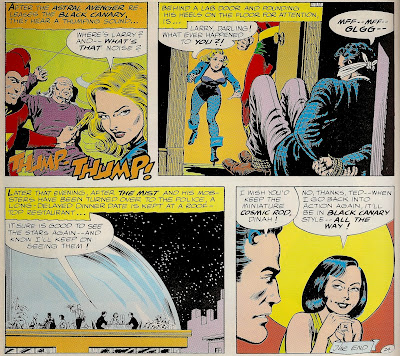 I have read a lot of really, really bad Black Canary stories lately in the pages of the New 52's Birds of Prey and Team 7.  I almost forgot what a good BC story looked like until I re-read this issue.  I can't praise this story highly enough!

Starman is one of my favorite heroes of the Golden Age, and I'll go into greater detail about that tomorrow, December 18th, which is Ted Knight's birthday according to the Super DC Calendar.  His powers don't compliment Black Canary, and there isn't any real thematic resonance between their superhero identities (unlike say, Canary and Wildcat).  There's no obvious story reason for these two to team up, but that's not what The Brave and the Bold was about.  Not complimentary parts, but two characters who bring out something unexpected in each other.

Ted Knight and Dinah Drake feel like good old friends, and that's just great storytelling.  Starman buddies up with his teammate's husband to help her when she's brainwashed.  And later, Black Canary uses Starman's own technology to save him and wreak havoc on the bad guys.  It's a great team up and they work together really well because they feel like rounded, authentically good-hearted characters.

Larry Lance gets to play both the private investigator and damsel-in-distress.  Like Steve Trevor (when done well), Lance is a heroic man-of-action in his own right, but he never overshadows his better half.  Dinah is the "super" of the two.  My favorite Larry moment is when Dinah appeals to his masculine ego while still establishing their pecking order.  She praises his stealth skills as a private investigator so that he won't fight the criminals himself and get hurt.

Dinah gets "duped" in this issue.  The Mist uses his chemicals and subliminal suggestions to use her in his crime spree.  When her husband and friend break her of the villain's hold, she doesn't wallow in sadness or guilt or embarrassment.  She says, "Aw, hell no!" and laces up her gloves.  She suits up for the first time in some time and unleashes the fury of the Black Canary on the criminals of Park City.

Mark Waid described Gardner Fox as the most prolific writer of the Silver Age other than Stan Lee.  Throw a stone at a pile of comics written between 1940 and 1970 and there's an even chance you'll hit one of Fox's books.  With that much sheer volume of credit to his name, you'll find a lot of good, a lot of bad, and a lot in between.  The bad scripts, I think, are the more dated Golden Age scripts that are difficult to read today.  The good scripts read just like The Brave and the Bold #61.  Fun.  Full of humor, full of character, full of crazy science and daring action.

Murphy Anderson draws a classically beautiful Black Canary in the same style as Carmine Infantino and Ross Andru.  Dinah's whole demeanor takes on a more assertive look when she puts on the costume, as though it were a uniform.  It's a great visual distinction between wholesome florist and heroic adventurer.

I read this story in the collected Black Canary Archives.  If you can find it there or on its own, I highly recommend reading this issue!

Posted by Count Drunkula at 6:56 AM