Today is World Penguin Day, and if you know anything about me and this blog, you know I take advantage of every ridiculous opportunity to coordinate posts with holidays and anniversaries, be they real or not.  Well, as soon as I heard about World Penguin Day, I knew I would review the Black Canary and Batman's team-up against the Penguin.

Actually, when I first heard about World Penguin Day, I hung my head and sighed heavily.  But then I thought of the issue! 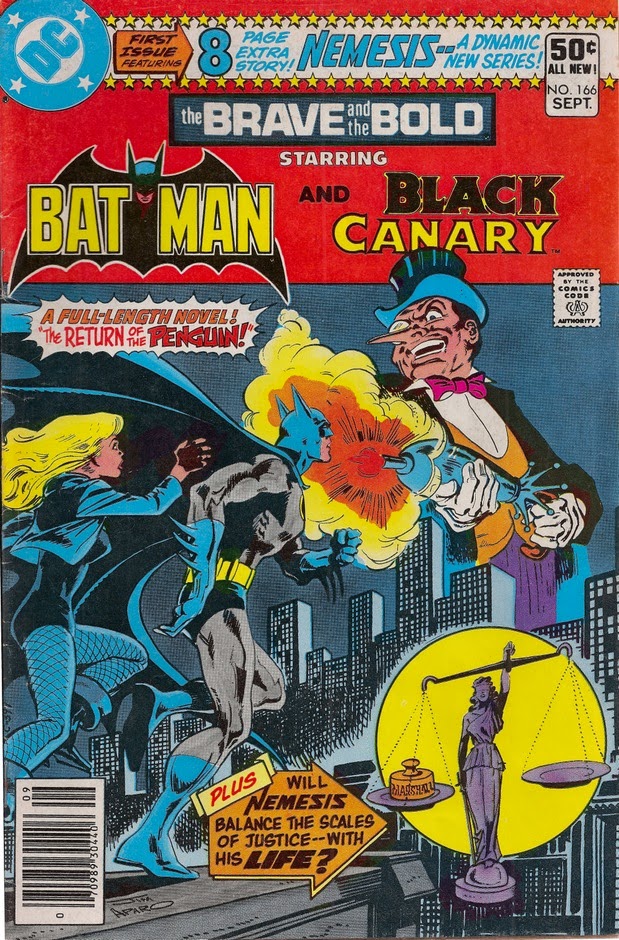 The Brave and the Bold #166 pairs the Dark Knight Detective with the Blonde Bombshell in a tale called "Requiem for Four Canaries" written by Michael Fleisher with art by the legendary Dick Giordano and the nearly as legendary, but no less extraordinary, Terry Austin.  Fleisher is probably best known for his work on Adventure Comics where he pushed The Spectre to new heights of horror and greatness with the even legendarier artist, Jim Aparo, who happened to provide the cover for this issue of The Brave and the Bold.

"Requiem for Four Canaries" opens with a breakout at Gotham Penitentiary.  Three prisoners sprint across the marshland after an unknown party dynamited the exterior wall.  These convicts don't know who blew the wall, but they're not waiting around to find out.

Unfortunately for them, the Batman arrives on scene and puts the three escapees down pretty quickly.  Through his inner monologue, we discover that the dynamite went off two hours ago and Batman has spent the time since rounding up prisoners who are trying to get across the bog.  At last, the Dark Knight has recaptured all of the convicts save one: the Penguin.  Commissioner Gordon tells Batman they had better get back to Gotham before the Penguin's latest crime wave kicks off.

Batman knows, though, that the Penguin isn't heading to Gotham; he's going to Star City on the other coast, to exact revenge on four henchmen who sold him out after his last crime spree.  And sure enough, we find the Penguin in Star City the next day... 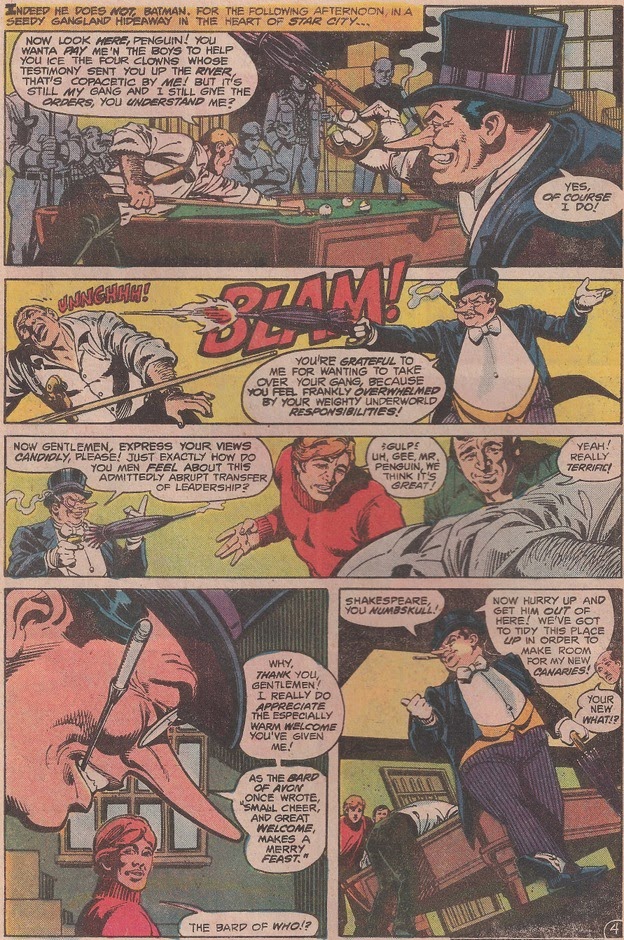 The Penguin explains that canaries are crucial to his revenge plot for what they symbolize.  The word "canary" is slang for a criminal who "sings" to the authorities, like the underlings who turned state's evidence on the Penguin.  The noisy canaries in their cages will serve as inspiration in the Penguin's attacks on Batman and his former goons.

That night, Dinah Lance, "the lovely brunette who is secretly Black Canary", attends a Star City night club for a performance by a songstress known as the Divine Miss B.  As the talented beauty belts out the song "People", the audience listens in rapt attention.  But when Miss B. hits a particular high note, a sugar shaker cracks releasing a toxic gas right in the face of the spectator at the table.

Dinah examines the victim and then notices the Penguin slipping through the crowd and exiting the night club.  Dinah tells her friend Alice that she's not feeling well because of the noxious gas floating around the dead guy's table.  But when she sneaks away... 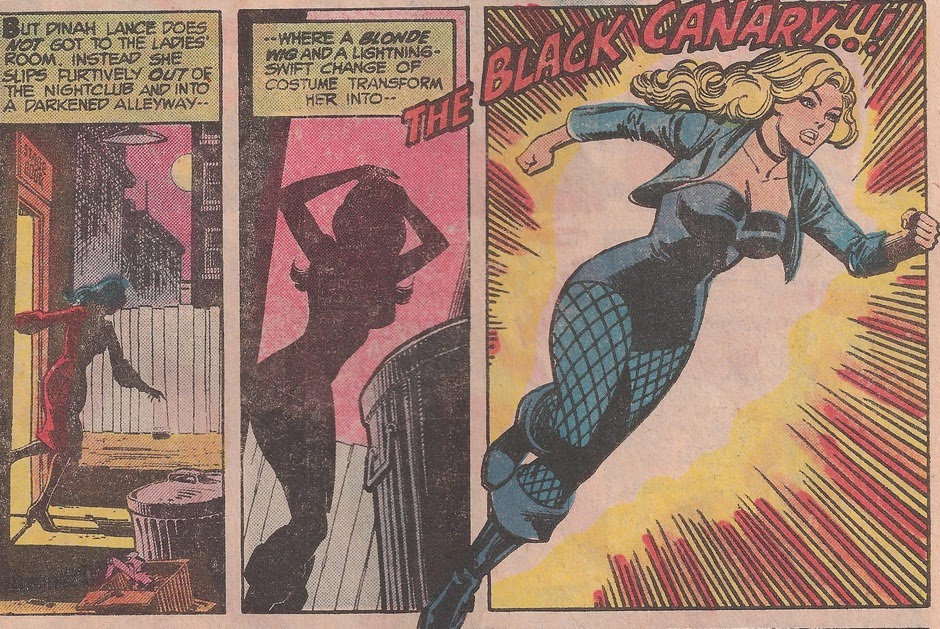 As the Penguin is about to get in his getaway car, one of his henchmen asks why he didn't use a canary in the murder of the first victim.  Penguin argues that he did use a canary, in a way: 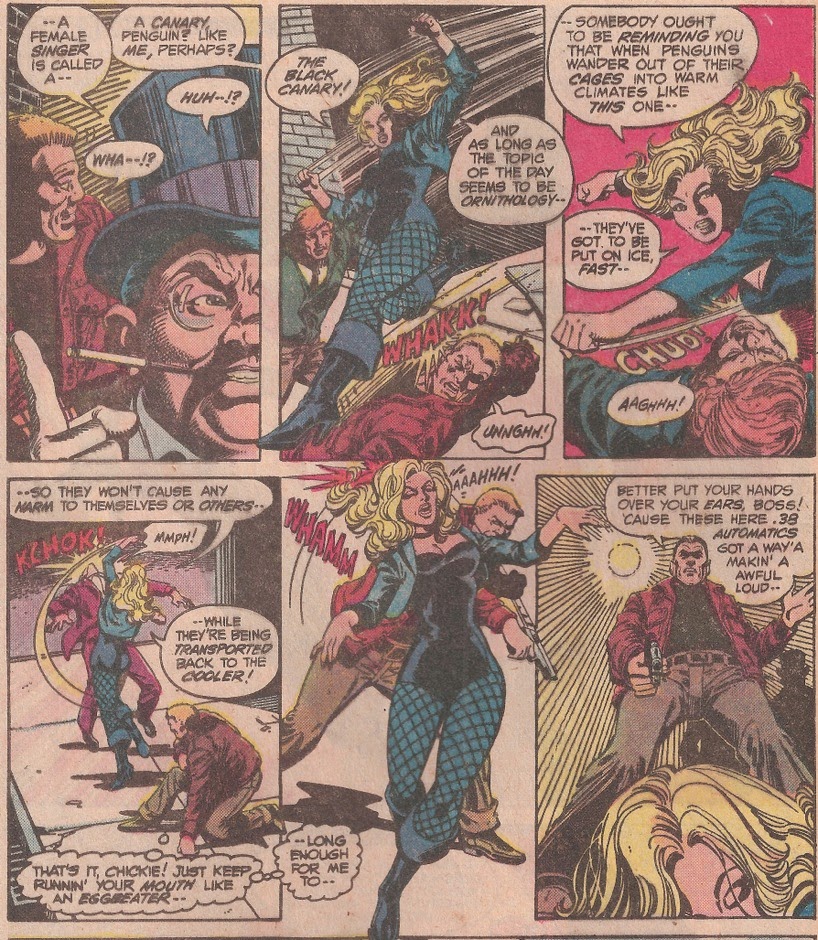 Suddenly, a batarang rips through the night and disarms the henchmen before he can execute Black Canary.  The Batman swings down toward the Penguin and his goons.

Acting quickly, the Penguin sprays Black Canary with the poison gas from his umbrella.  He knows that Batman can't chase him and save Canary at the same time, and he correctly guesses that the Dark Knight will save a life first.  After the Penguin escapes, Black Canary regains consciousness and asks Batman what he's doing in Star City. 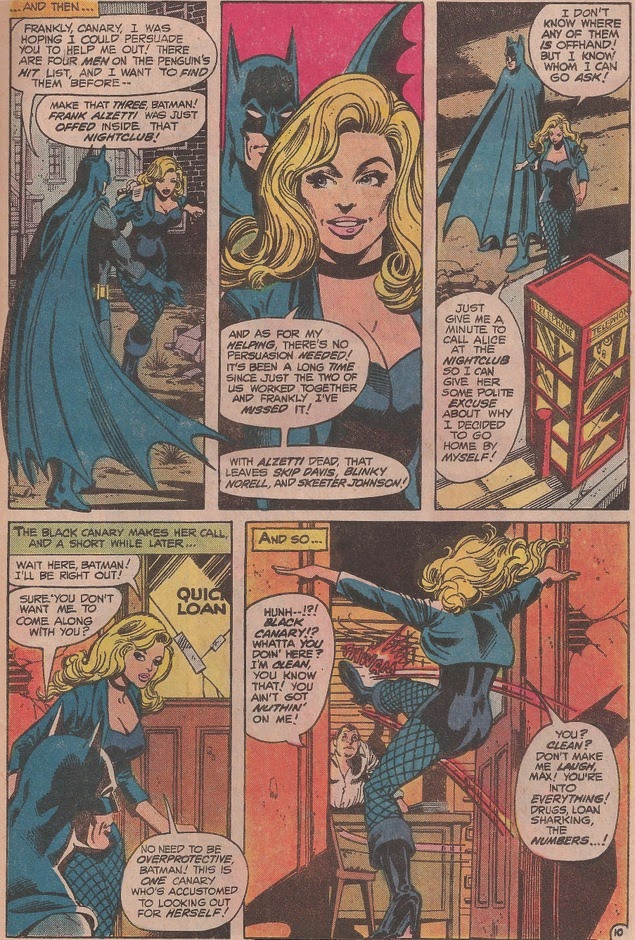 Black Canary tries to play tough cop with her informant, demanding information on the Penguin and the three remaining henchmen.  Max isn't intimidated by a girl in fishnets.  She makes a few sexist comments before suddenly changing his tune and looking quite intimidated.

Unbeknownst to Black Canary, Batman has snuck into the room behind her.  The Bat's mere presence is enough to frighten Max into revealing everything he knows, but Batman slips out before she sees him.  So when Black Canary comes out with the intelligence they need, she's beaming with pride over the effectiveness of her tactics.  For his part, Batman lets her feel like she earned the win.

The heroes arrive at the second target in time to see the explosion that kills him.  Now the Penguin has only two victims left and Batman proposes that he and Black Canary split up to watch over the next targets.  But the Penguin anticipates this strategy and takes action to get rid of Batman first.

While the Dark Knight surveils one of the other targets, the Black Canary surprises him by coming back and claiming the other target is already dead.  Then she throws herself at him. 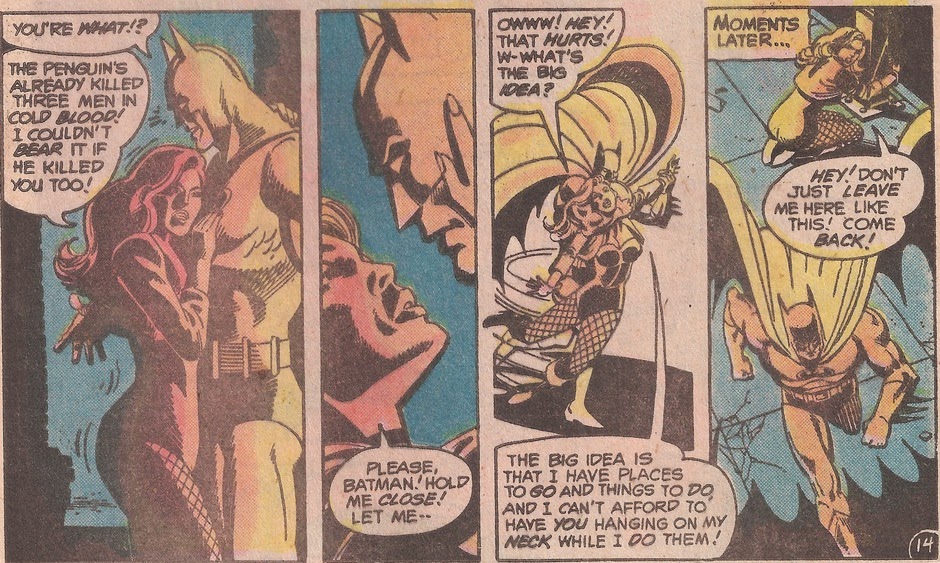 As if this scene wasn't strange and unexpected enough, the final sequence comes completely out of nowhere.  Suddenly, the Black Canary is held captive at the Penguin's hideout and she's stripped down to her bra and underwear.  Because, sure, why not?

We learn that the Penguin sent a decoy dressed as Black Canary to kill the Batman.  Batman's thought bubbles also reveal that the plan nearly succeeded, but when the impostor got close enough Batman could tell she was a natural blonde, whereas the Dinah Lance is not.

I present here the last two pages of the comic because they're full of Batman in action and a nearly-naked Black Canary.  It's cheesecake, but it works on me. 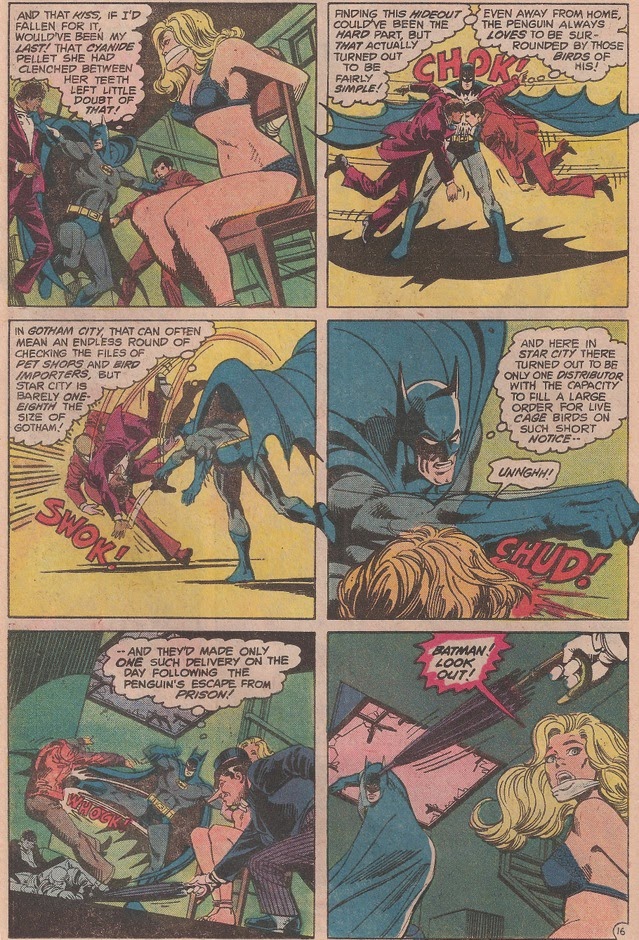 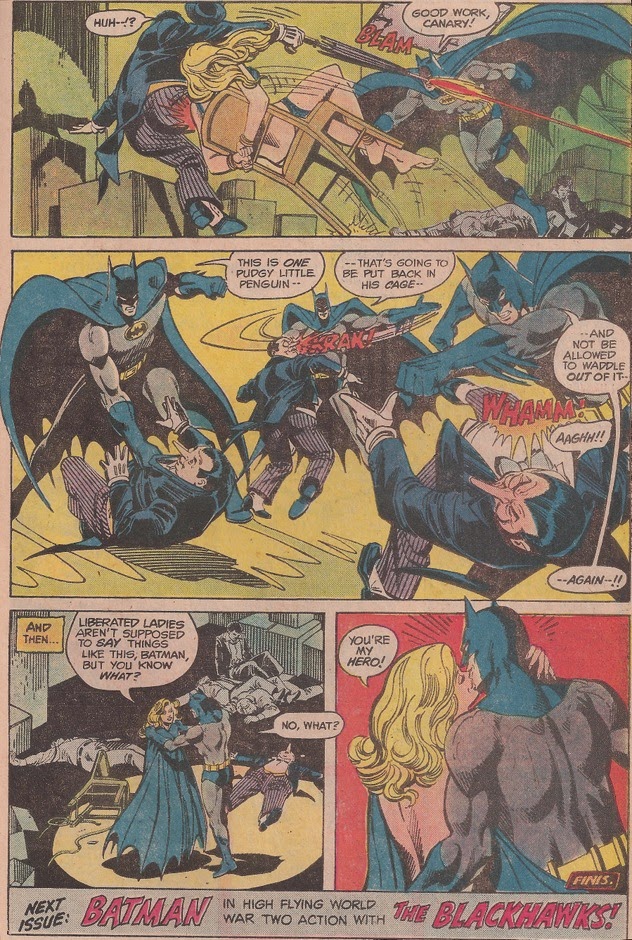 The odd turn at the end notwithstanding, this is a really fun story.  Most issues of The Brave and the Bold starring Batman that I've read were written by Bob Haney, and his storytelling... leaves some to be desired.  And yet, the ending does take a bizarre twist, but still, Fleisher's story works really well.  This same plot could have been farcical, but the seriousness of Fleisher's script and the beauty of Giordano's and Austin's art save it from going to far.

Probably the greatest achievement in this story is how well Fleisher depicts the Penguin as a cold-blooded and productive gangster.  He's not silly or stupid or spouting off puns or poetry pertaining to ornithology.  He's a killer; his methods get a little comic book-y at times, but he kills without drawing too much attention to himself.

Batman, as always, is Batman.  Black Canary doesn't get a whole lot of standout moments.  She beats up a couple of goons, but she's twice endangered, and one of those times isn't explained or justified.  She's reduced to damsel in distress...or rather damsel in undress.  Still, though, she manages to help Batman and she even kisses him very familiarly in the end.  And she's rarely looked as good as she does in this issue.  Both Giordano and Austin have worked on Black Canary before and they deserve a place on the list of Greatest Black Canary Artists.

Happy World Penguin Day!
Posted by Count Drunkula at 9:12 AM