I've waited months to review Justice League of America #220, a story that radically reimagines not only Black Canary's history but her whole identity and status as a member of both the Justice League of Earth 1 and the Justice Society of Earth 2.  At last, the time is right to cover this story, because according to the 1976 Super DC Calendar, today, April 10th, is Black Canary's birthday. 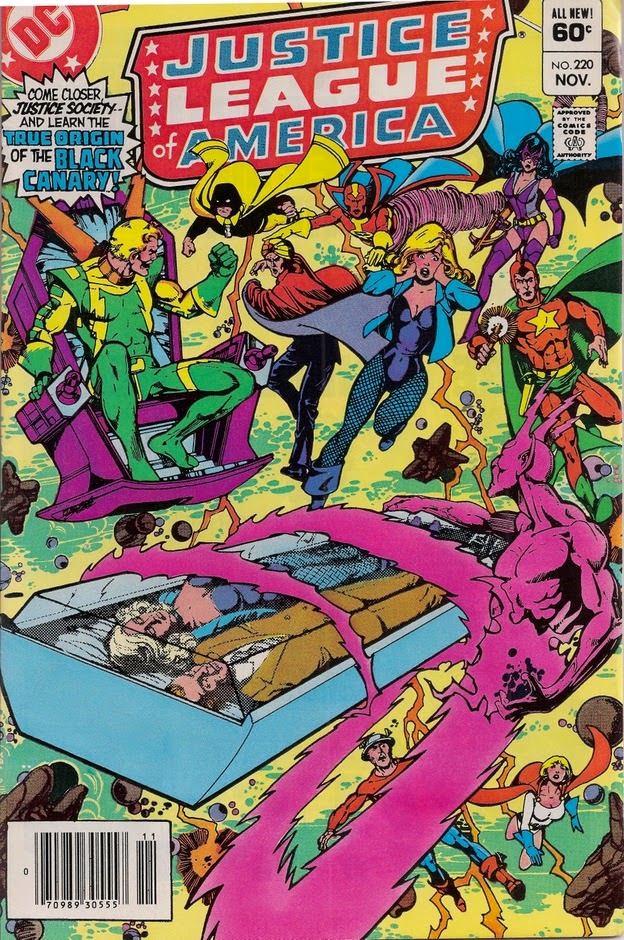 Justice League of America #220: "The Doppelgänger Gambit" is written by Roy Thomas with pencil art by Chuck Patton and inks by Romeo Tanghal and Pablo Marcos.  George Perez delivers a cover with not one but two Black Canaries--one corpse-like in a casket beside the late Larry Lance, and the other looking on in horror with members of the Justice Society of America, Red Tornado and Sargon the Sorcerer, all while the Earth 1 Johnny Thunder and the Thunderbolt loom menacingly.  The cover boasts that this issue includes the "true origin of the Black Canary".

Gerry Conway already wrote an amazing origin story for Black Canary with only one noticeable problem that I can see: it dated her.  Conway's story specifically locked Dinah into an era that was becoming evermore recognizable as the past.  The Justice League members were supposed to be young and in their prime, but the math would make Black Canary out to be something like sixty-two years old.

DC needed a retcon to explain this age discrepancy so that Black Canary could have functioned in both eras, on both teams, without qualifying for an AARP card.  And in the late 1980s they would write that retcon and it would work wonders.  But before they got there, Roy Thomas would craft a Black Canary origin story (supposedly inspired by a Marv Wolfman idea) that would make even Hawkman's history look straightforward.

Last time, for reasons unknown and inexplicable to characters who know him, Johnny Thunder's genie-like Thunderbolt attacked the Justice League of America during its annual meeting with the Justice Society.  Barry Allen, Hal Jordan, Firestorm, Elongated Man, and Zatanna were struck down by the mad Thunderbolt and now lie comatose in the JLA Satellite.  Only Black Canary and Red Tornado, both of whom originated from Earth 2, as well as Justice Society members Jay Garrick, Power Girl, Huntress, Hourman, and Starman came through the battle relatively unscathed.

Almost immediately after the attack, pairs of super villains from both worlds launched attacks against ancient temples of worship.  While Starman took Black Canary to the Thunderbolt Dimension to investigate the Johnny Thunder connection, the JSA members went planet side to take on the villains. 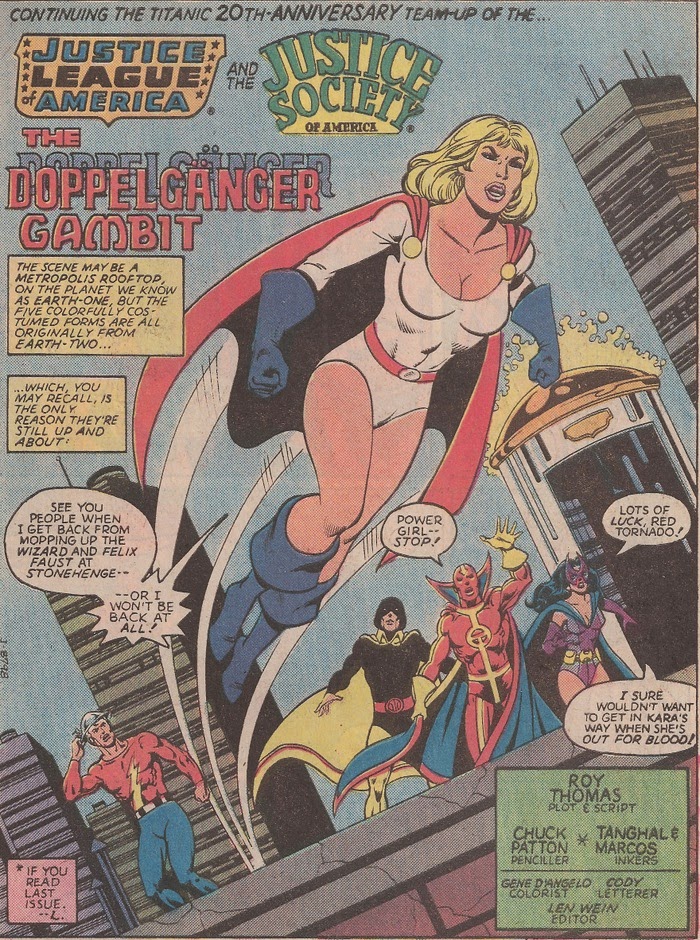 Power Girl shows her eagerness to tackle the villains, while Red Tornado advises caution and a strategy session to plan their counterstrike.  (Red Tornado is the worst.)  The unexpected arrival of Sargon the Sorcerer prompts half of the JSA to lash out at the mage.  Sargon mildly flirts with Huntress while magically besting her, Power Girl and Red Tornado, who, seriously, is the worst.

Sargon tells the Flash and Hourman that he was working with the Spectre when the Thunderbolt struck him down in his Earth 1 human host, Jim Corrigan.  The Flash welcomes Sargon's help and sends him out with Power Girl, who sounds less than thrilled. 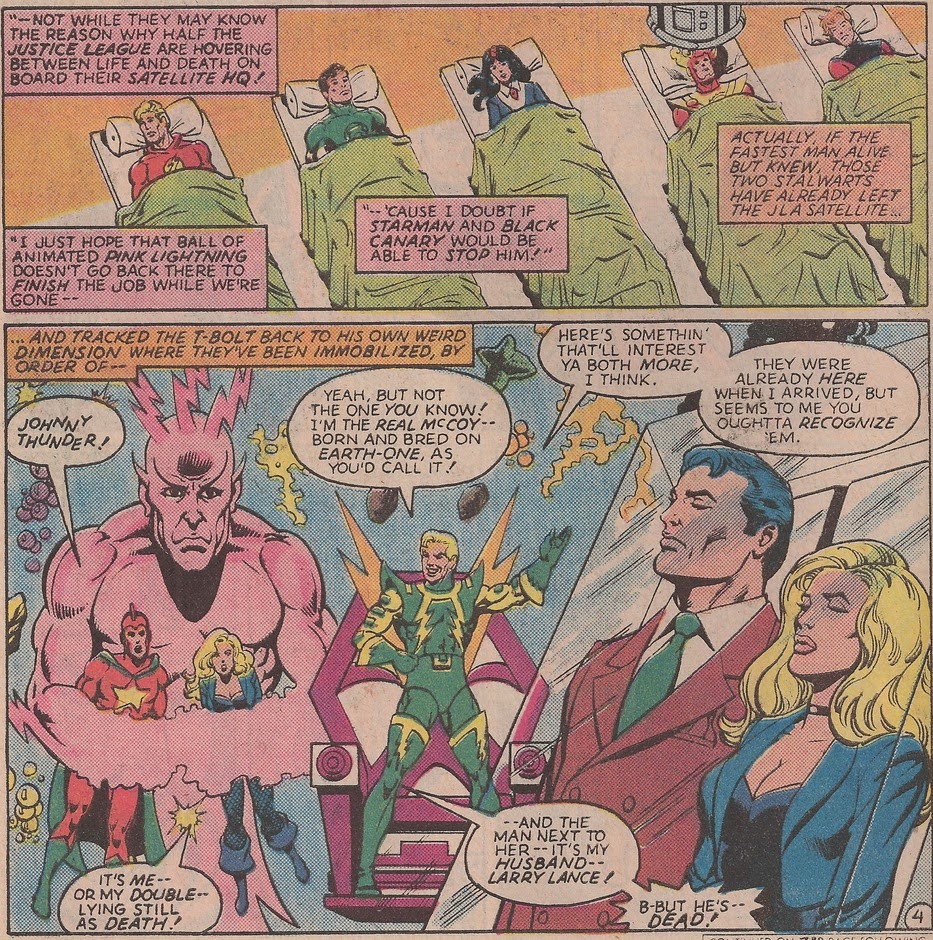 But far more shocking than their enemy's identity is what he shows them: a glass casket with the bodies of Black Canary's late husband, Larry Lance, and another body that looks exactly like her.  Johnny also holds captive the original and noble Johnny Thunder of Earth 2.

At Evil Johnny's command, Thunderbolt tells the story of how he and Good Johnny fought crime in the '40s on Earth 2, how Black Canary joined them in their crusade for justice, and how Thunderbolt was injured during one of their adventures, explaining why Johnny Thunder's monthly adventures went away in favor of Dinah's solo stories. 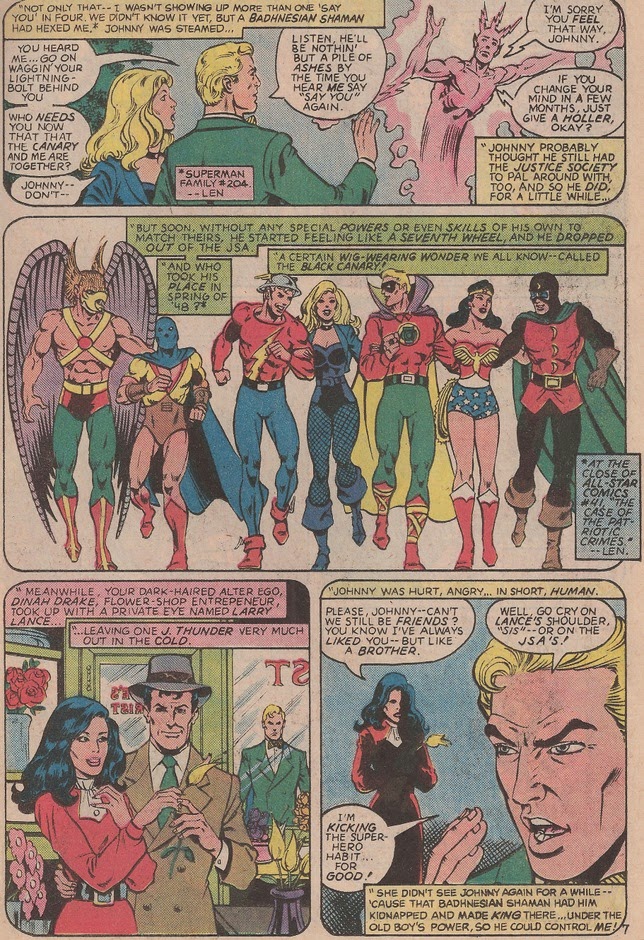 Good Johnny took off, devastated that the woman he fell in love with favored Larry Lance over him.  In subsequent years, he stayed out of her life while she grew closer to both Larry and the Justice Society.  Until, of course, the day the Justice Society of America quit fighting crime by refusing to divulge their real identities before Congress. 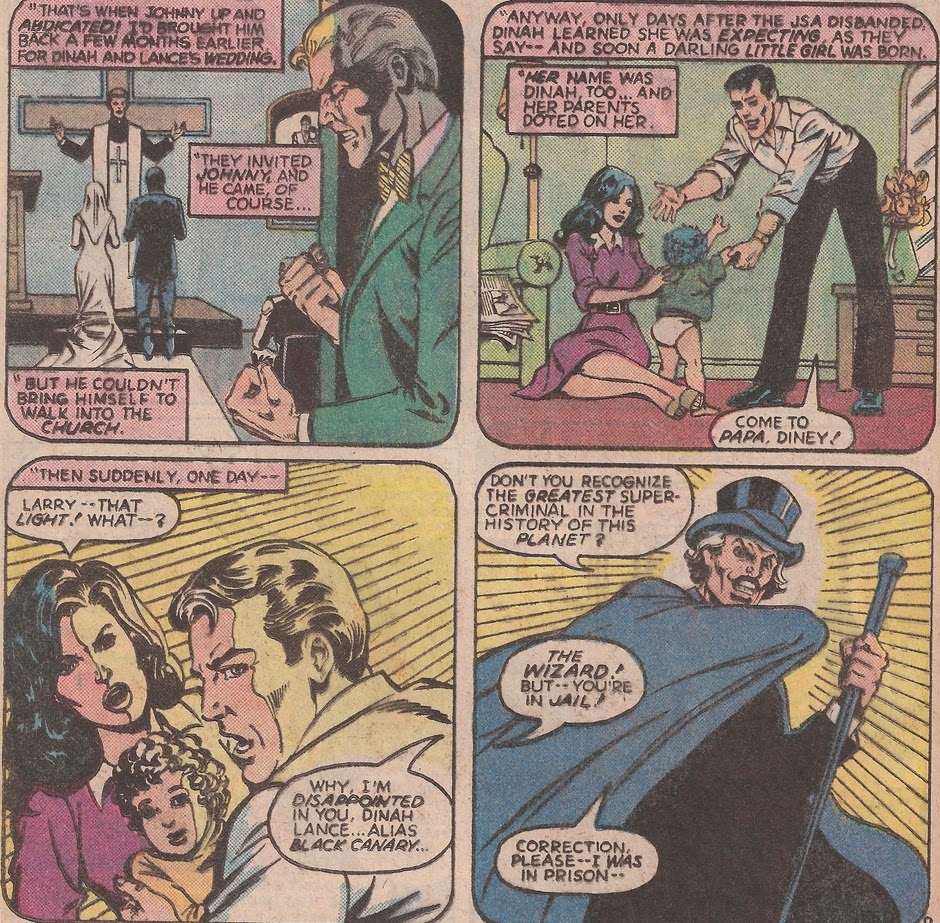 The Wizard... "the greatest super criminal in the history of the planet"?!!  That's a helluva stretch, but I will concede after this story he might be Black Canary's greatest villain.  Maybe. 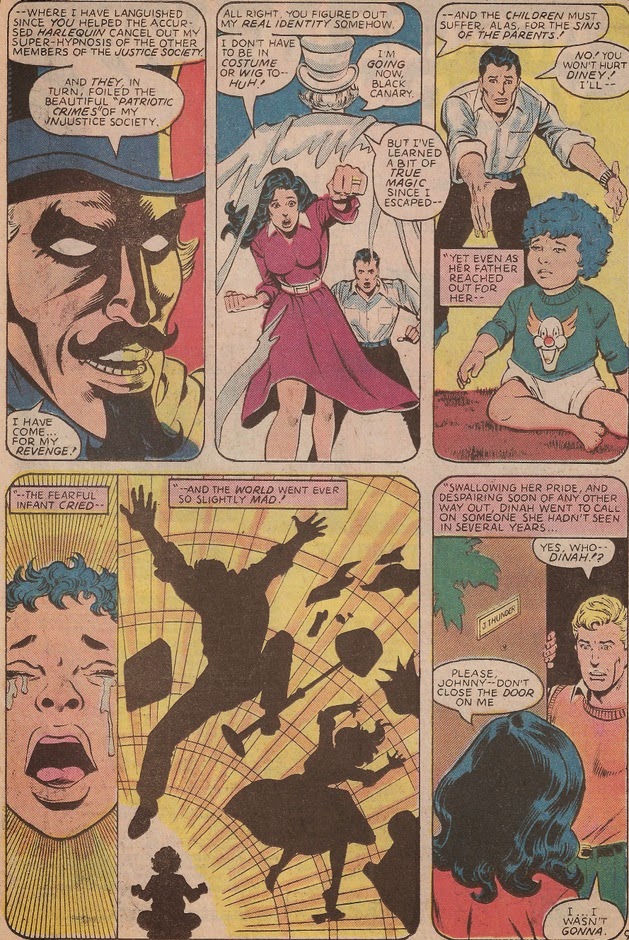 A desperate Dinah and Larry Lance bring their infant baby to Johnny Thunder, who summons Thunderbolt.  The genie offers to take the baby to the Thunderbolt Dimension where her destructive sonic powers won't harm anyone.  The caveat being, of course, that once there the child can never leave.  If Dinah and Larry send their child with Thunderbolt, she'll be safe, but they'll never see her again.

Approximately ten years after this story is published, the X-Men's Cyclops and Jean Grey would face a similar dilemma when their infant was infected with a virus and needed to be sent into the future to save his life, resulting in their child becoming the militaristic leader of X-Force, Cable.  And that scenario makes only a little bit more sense than what Roy Thomas will offer up later in this issue.

Dinah and Larry agonize over the decision--I would think--but finally surrender their baby to the protection of Thunderbolt.  He brings the baby to the Thunderbolt Dimension and keeps her in suspended animation, but then he goes a little off-script and wipes the memory from Dinah, Larry, and Johnny Thunder.  He convinces them that the baby died... because it will be easier for them to deal with...  Yep.

Black Canary, much like any attentive reader, is full of questions.  But Evil Johnny interrupts the story to draw attention to the ensuing battles on Earth 1 between the heroic and villainous pairings.

In Mexico, Chronos and the Fiddler have seized an ancient pyramid.  Jay Garrick and Hourman rush to intervene but they're thwarted by a time-holograph created by Chronos, and then the Fiddler plays a little ditty causing the heroes to keep dancing until they die.

Meanwhile, Dr. Alchemy and the Icicle have taken over one of the Great Pyramids of Egypt when Huntress and Red Tornado come liberate the place.  Reddy drops Huntress off on the sloping face of the pyramid, but Icicle freezes the side, causing Huntress to slide down.  But being the daughter of Batman and Catwoman affords Huntress a healthy amount of agility and preparedness.  She manages to throw a batarang that knocks out Icicle even as she's sliding down. 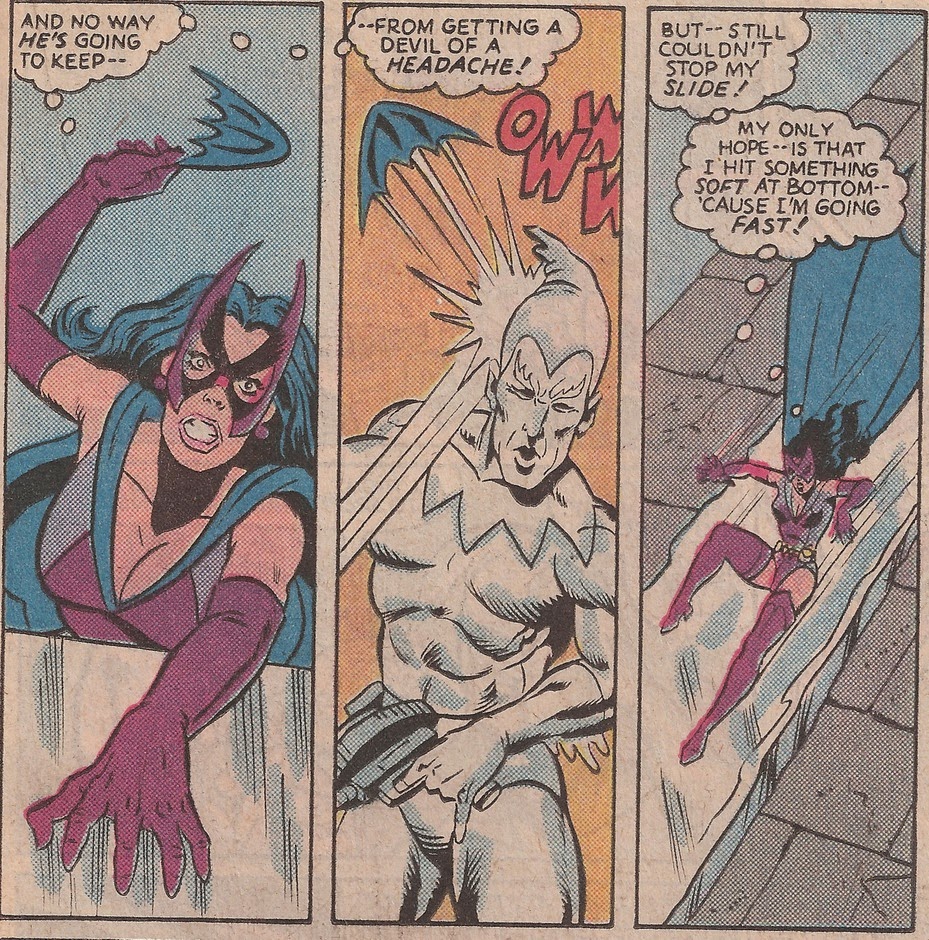 At the same time, Red Tornado is battling Dr. Alchemy, who maneuvers the android into position so that Huntress slides off the pyramid and crashes right into him.  The result is that Huntress and Red Tornado are both knocked out, spoiling all of the good will Huntress gained by swatting Icicle.  God, Red Tornado sucks.

Back in the Thunderbolt Dimension, Evil Johnny taunts his hostages and brags of the devious goings-on that he's fostered down on Earth 1.  Unbeknownst to Evil Johnny, some of the electric sprites of the dimension have come to started rescuing Good Johnny from his bonds.  Just when Evil Johnny is ordering the genie to murder Black Canary and Starman, Good Johnny breaks free and shouts out the magic words that put Thunderbolt back in control. 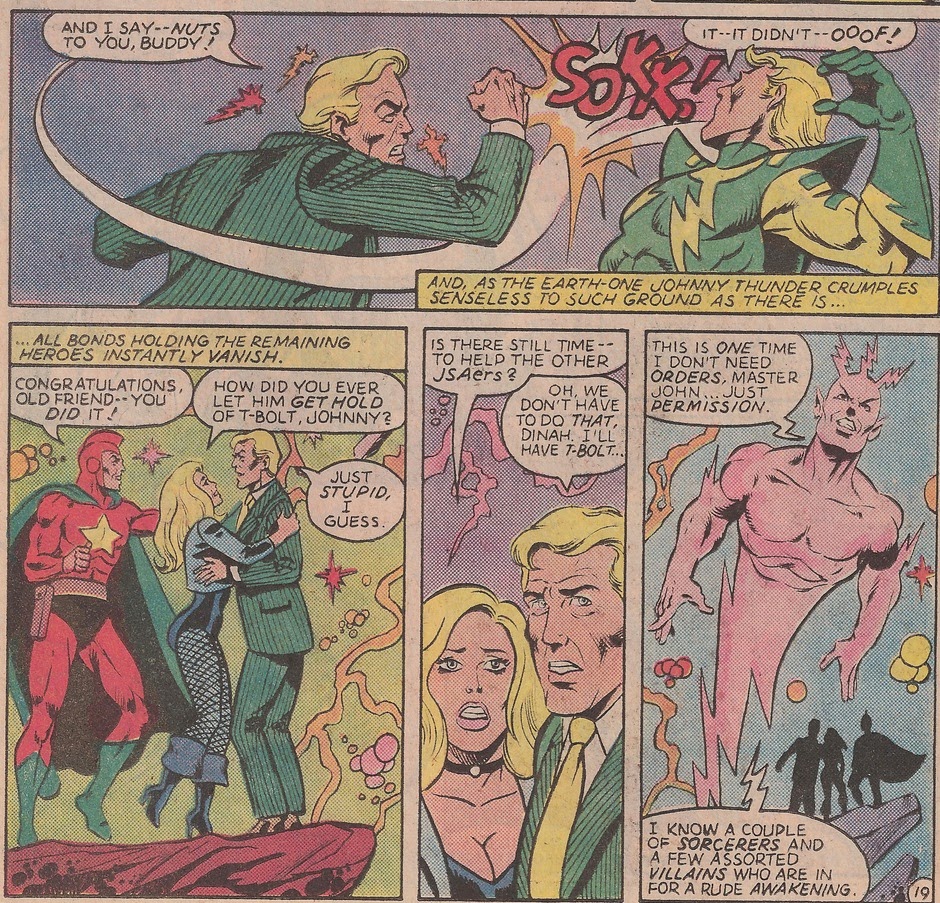 Freed of Evil Johnny's influence, Thunderbolt races to the JLA Satellite to revive the Leaguers he hurt last issue.  And before long, the heroes of Earth 1 snap back into action. 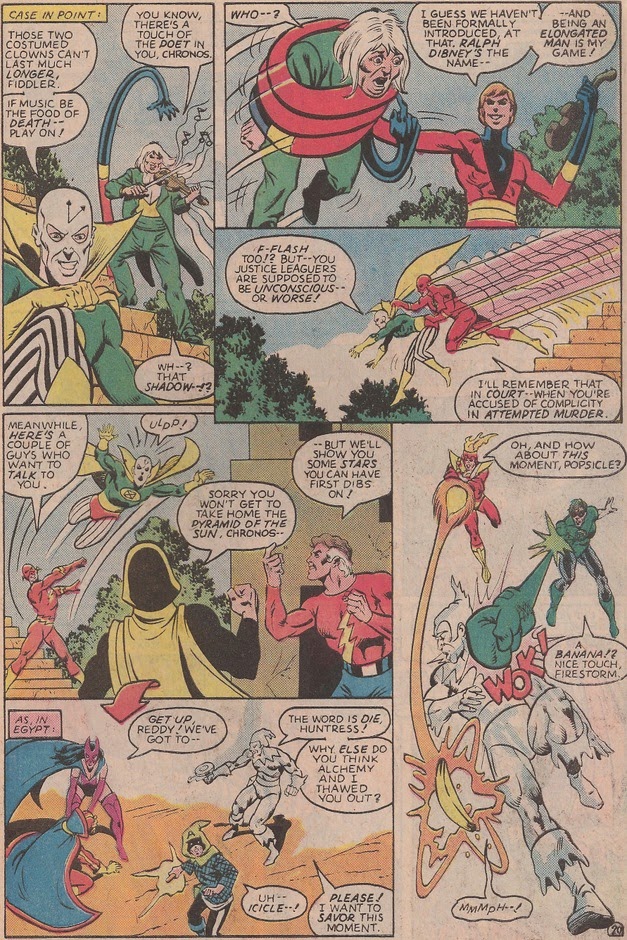 Elongated Man and Barry Allen help Jay and Hourman take out Chronos and the Fiddler.  Firestorm and Hal Jordan help Huntress and Red Tornado take out Dr. Alchemy and the Icicle.   And Zatanna helps Power Girl and Sargon take out Felix Faust and the Wizard.

In the Thunderbolt Dimension, Evil Johnny is captured though still trying to regain control over the genie.  Black Canary is overwhelmed by the image of what looks like herself and her dead husband.  Is it a daughter she never knew or something even stranger, she wonders.

Oh, it's stranger.  And it's the kind of story that only Bob Haney Superman and the Spectre could tell. 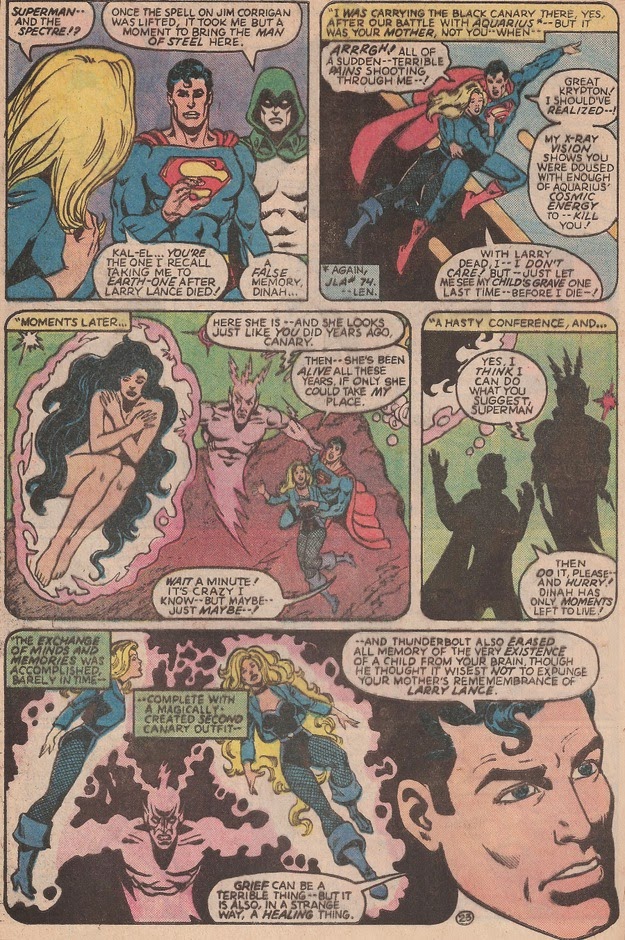 So... Superman thought it best that Black Canary swap bodies and memories with her own daughter who lived a decades in suspended animation.  Dinah Drake effectively dies with her husband, while her consciousness takes over the dormant body of her daughter. 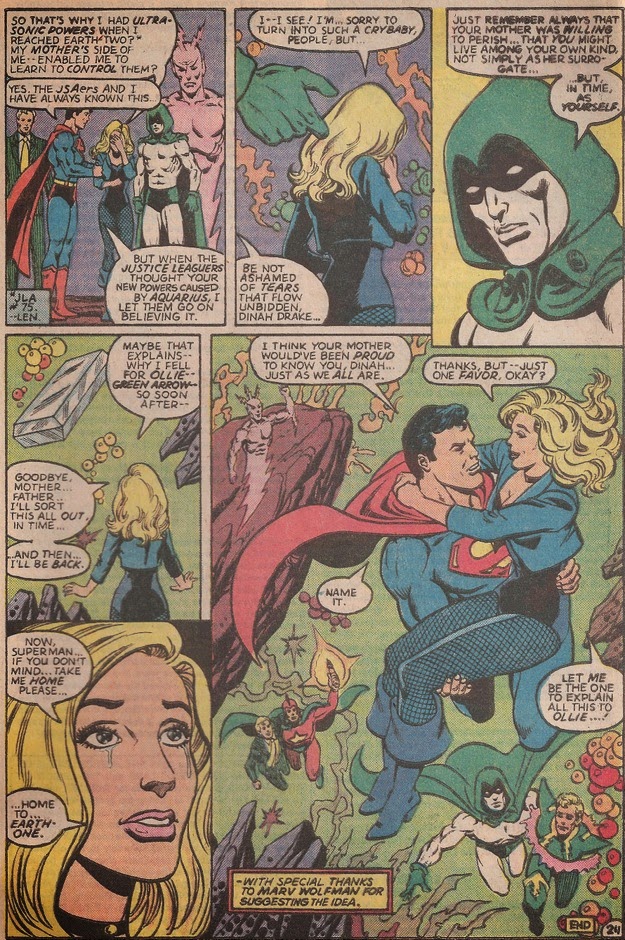 Aside from Red Tornado totally being the worst, what can we gather from this issue?

This ending is so, sooooo $@#%ed up!  I guess at this point Black Canary is considered to be the daughter of the original Black Canary, but she's full of her mother's memories and experiences.  What happens to her now will shape her life as though she's a different person, but couldn't that be said of any character.

The whole motive for this retcon was to de-age Black Canary.  And Roy Thomas did so by putting the character in the identical body of a child she never remembered having.  But the tale ends with her crying and being carried off--happily--in Superman's arms, so I guess it's a wash.  After all, that's how issue #74 ended when her husband died right in front of her.  Maybe that's one of Superman's untapped powers; he can make Black Canary get over any traumatic event.

The action scenes with the Justice Society versus the dastardly duos is mostly underwhelming.  The way the heroes fail to stop their adversaries is forced and lame, but the timely arrival of the Justice League heroes is pretty exciting.

Black Canary has never had much of a Rogues' Gallery; her list of personal foes makes Aquaman's look like the Society of Evil.  This story, however, puts two common foes of the JSA and JLA firmly in Dinah's stack of super villains.  Johnny Thunder of Earth 1 never achieved much on the page or off, but his schemes and his connection to her personal history make him an interesting enemy for later stories.  Likewise, Black Canary now has a personal, maybe the most personal beef with the Wizard.  He cursed her own freaking child and condemned it to suspended animation for life until she took over the body.

Well, Happy Birthday, Black Canary!  You get a new body and a new history, one that will last about five years before cooler heads think of a better idea for post-Crisis on Infinite Earths.
Posted by Count Drunkula at 12:00 AM