According to the Super DC Calendar from 1976, today, January 17th, is the birthday of Kent Nelson better known as Doctor Fate! 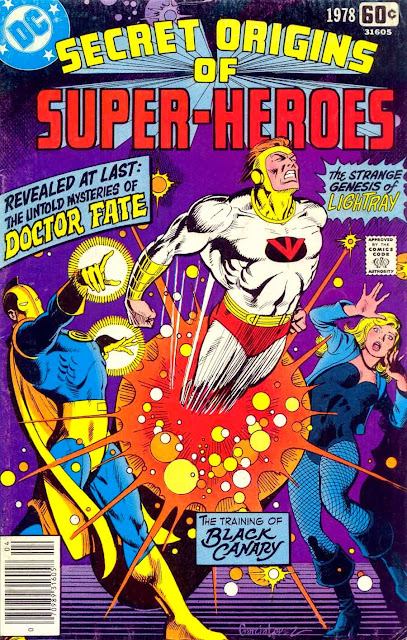 Like that cover?  You know you do--it's by Jose Luis Garcia-Lopez, Praise Be His Name! 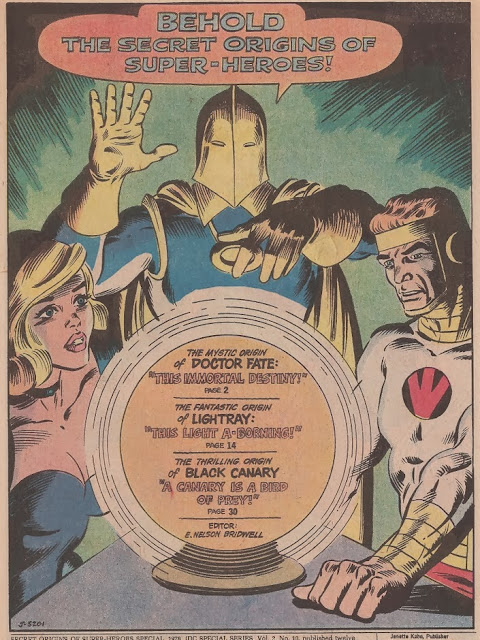 The title page features Dinah, the Doctor, and Lightray drawn by Joe Staton, who also drew the Doctor Fate story.  Staton's Canary, like his women in general, is curvy and voluptuous.  It makes me want to see more of his work on the character.

Dinah Drake's journey to hero of the Justice League is told in "The Canary is a Bird of Prey".  This heretofore untold origin of Black Canary was written by Gerry Conway with art by Mike Vosburg and Terry Austin.

I'm familiar with Vosburg's art from Marvel's G.I. Joe, where he drew some of my very favorite issues in the early '80s.  As much as I loved those stories of America's elite special missions force, I always thought Vosburg's art was holding the stories back.  His art in this story, though, blows me away and I give a lot (most?  all?) of the credit to the inking of the great Terry Austin.

The story opens with Dinah taking down a mobster, and then being asked an embarrassingly sexist and patronizing question by her boyfriend, Green Arrow. 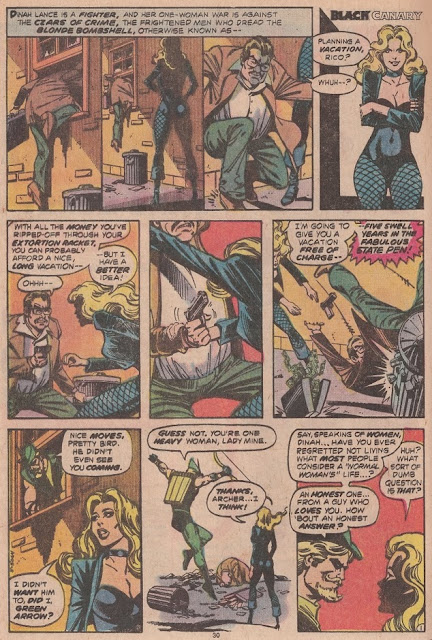 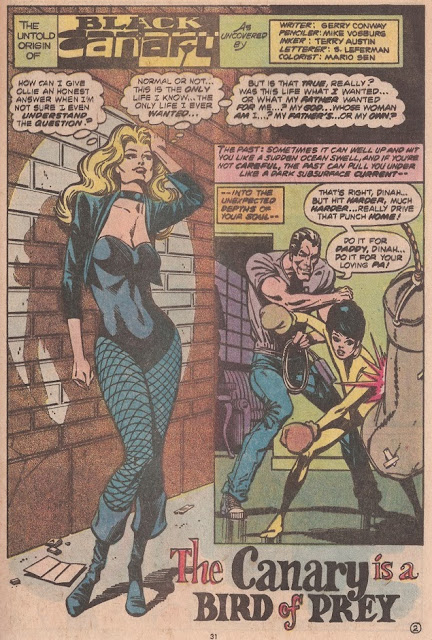 Thinking about her life's decisions drags Dinah Drake back to her childhood, where she was the apple of her father's eye.  Her father was Lt. Richard Drake of the Gotham City Police Department, and in the wake of his wife's death, he trained young Dinah to be as tough and capable of fighting crime as any cop.  He even calls her "Little Bird". 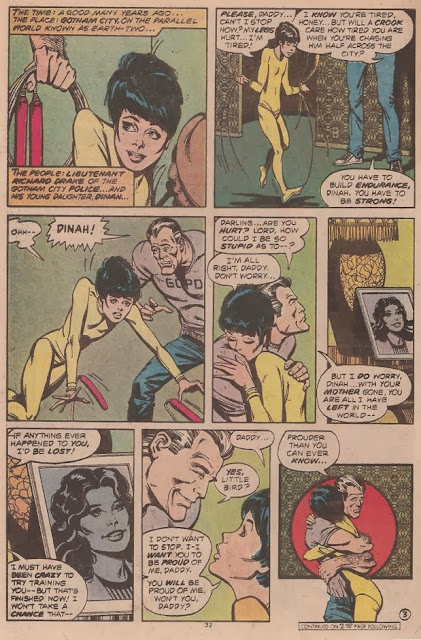 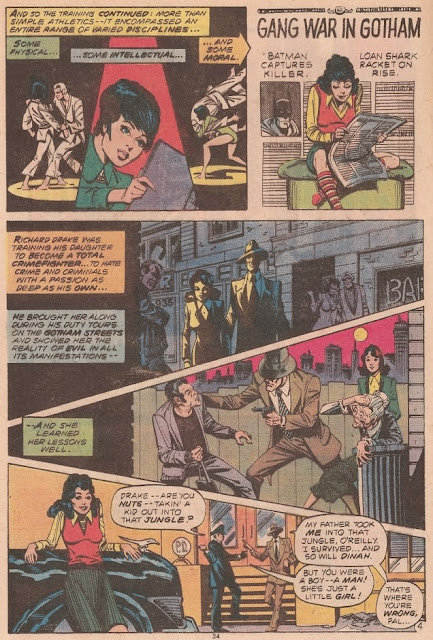 As Dinah grows to womanhood, she continues her physical and academic training and goes out one night with her father and his partner, Larry Lance. 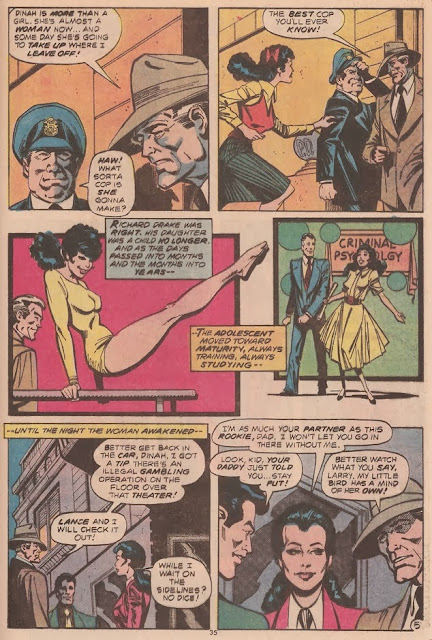 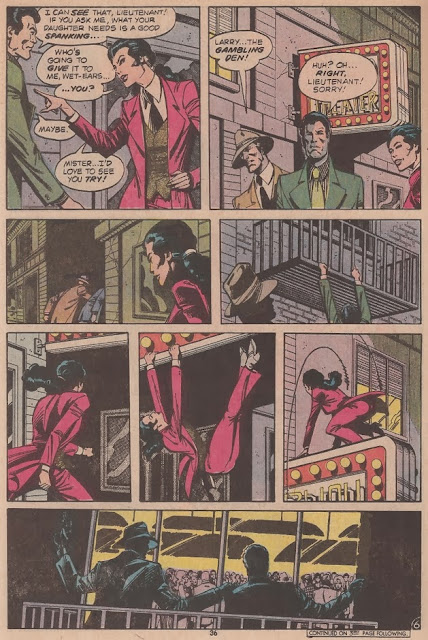 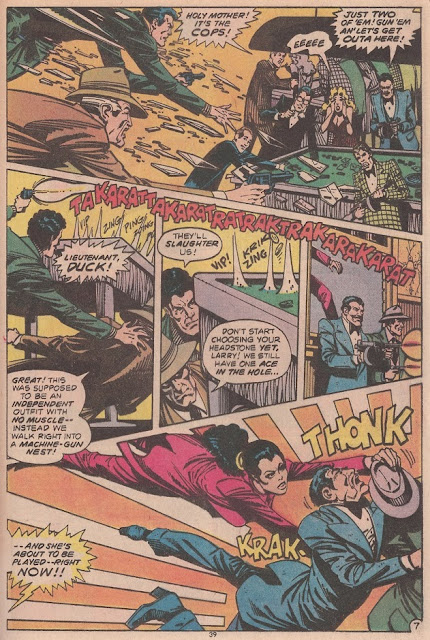 In typical fashion, Dinah and Larry's relationship goes from feisty to flirty, the sexual tension boiling as their dangerous profession draws them closer. 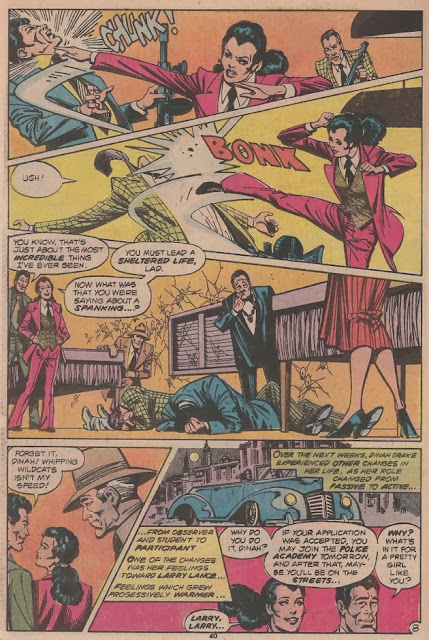 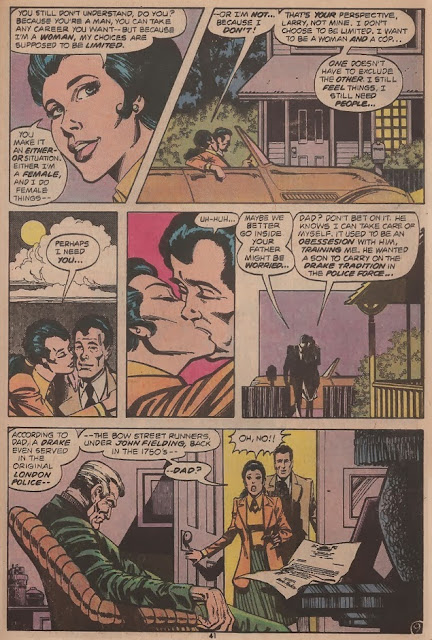 Service to the police and community was central to the Drake family.  Dinah grew up to follow all the men in her family because Richard Drake didn't have a son.  She never seems resentful about her father pressuring her to take up more so-called manly activities; she goes along completely.

Unfortunately, the Gotham PD didn't feel the same way.  Dinah's application to the academy was rejected.  The disappointment destroyed her father, Dinah believed. 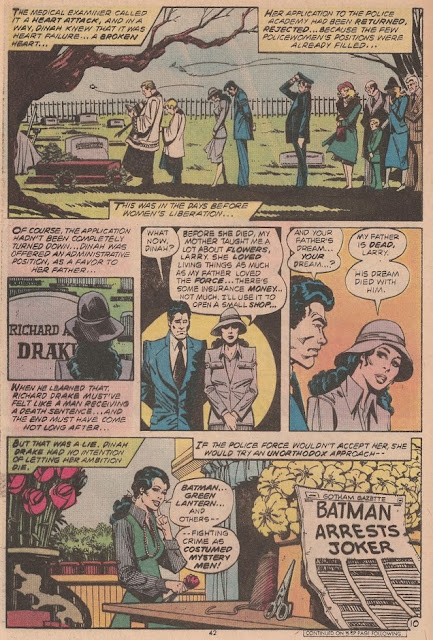 Once her father--and his dream--is buried, Dinah opens up the flower shop.  So she'll honor her mother's wishes after her death, but not her father's?  Well, not exactly.  The call to justice will not go unanswered just because she can't wear a badge and uniform. 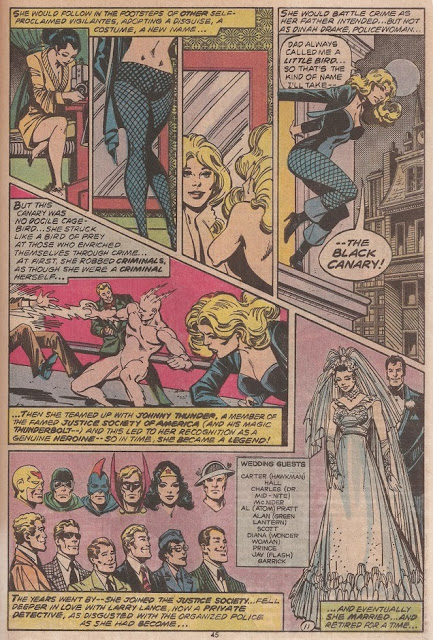 Notice Kent "Doctor Fate" Nelson wasn't invited to the wedding.  You'd think they could have added him into that panel as a bit of synergy in the story. 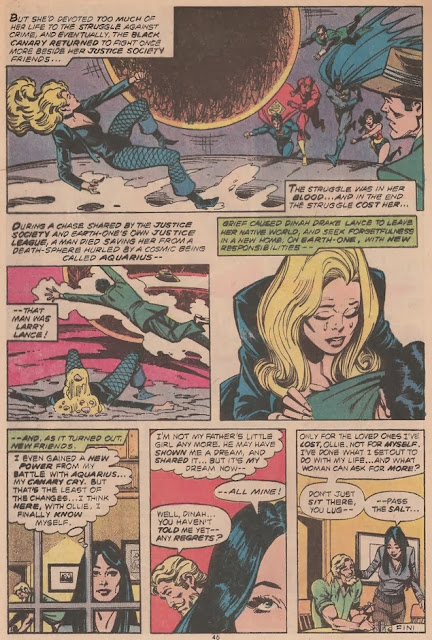 So that was the Black Canary's origin as of 1978.  In about five years, Roy Thomas would retcon Dinah's history to explain why she didn't age like the rest of her Justice Society contemporaries.  It would be...awkward, and I'll get to it a little later.  Then a few years after that, Crisis on Infinite Earths would streamline that origin.

Posted by Count Drunkula at 4:35 AM