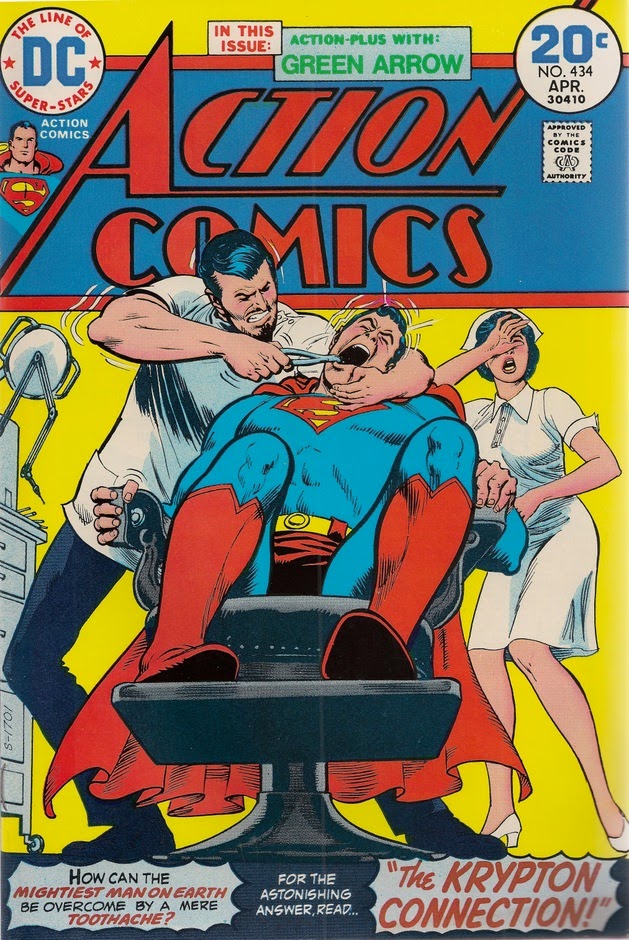 Action Comics #434 is cover dated April 1974 and hit the shelves on January 31, according to Mike's Amazing World of DC Comics.  The lead Superman story is written by Cary Bates with art by Curt Swan and Vince Colletta and a cover by Nick Cardy.

The Green Arrow strip entitled "Zatanna's Double-Identity" is written by Elliot S. Maggin with art by Dick Dillin and Frank McLaughlin.  The story opens with Green Arrow recounting the most recent frustration in his terribly burdensome life. 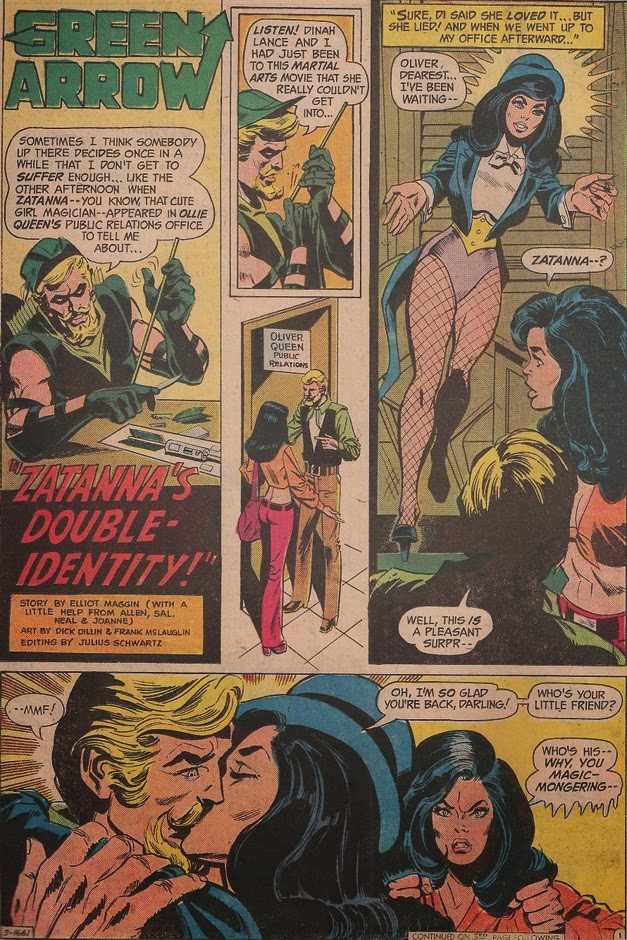 Dinah Lance is hella pissed that her Justice League teammate, Zatanna, is locking lips with Oliver Queen, Dinah's boyfriend.  But what pisses her off even more is how Zatanna acts like she is Ollie's lover and Dinah is a total stranger.  Dinah storms off letting Ollie sort out the situation.  Maggin makes a point of referencing Dinah's judo mastery; she leaves to maintain discipline over her mind and body.

Ollie assumes that Zatanna has been the victim of some kind of magic spell that screwed wit her memory and perceptions, but instead of concocting a practical way of solving that problem, he takes Zatanna with him to the public demonstration of a bank's new super security system.

There's some not-too-sublte jab at the anti-Communist witch hunts in Washington, D.C. before a pair of armed robbers bust in and try to rob the place.  Ollie changes into his Green Arrow costume and he and Zatanna spring into action. 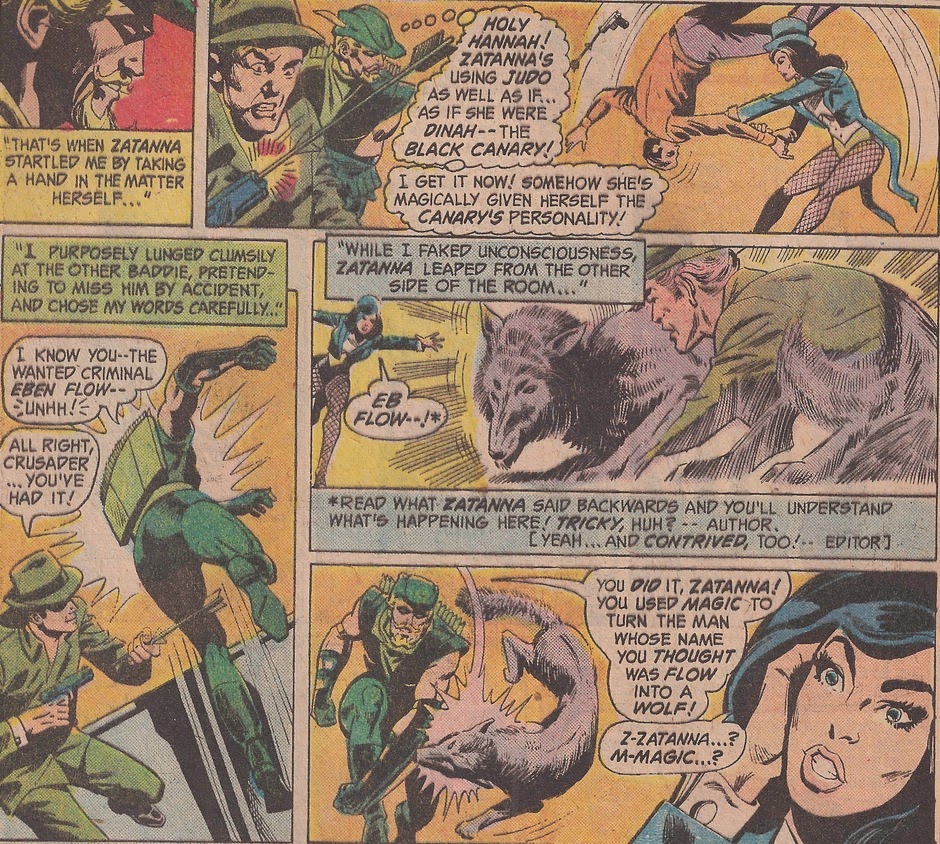 Zatanna slowly comes to her senses and remembers her own identity and powers.  She changes the robber from a wolf back into his human form.  That's lucky for him, because remaining in animal form for too long could be disastrous and permanent, as Zatanna explained to Black Canary in the Bloodspell graphic novel.

Back at Ollie's office, Zatanna reveals what happened to make her behave so strangely. 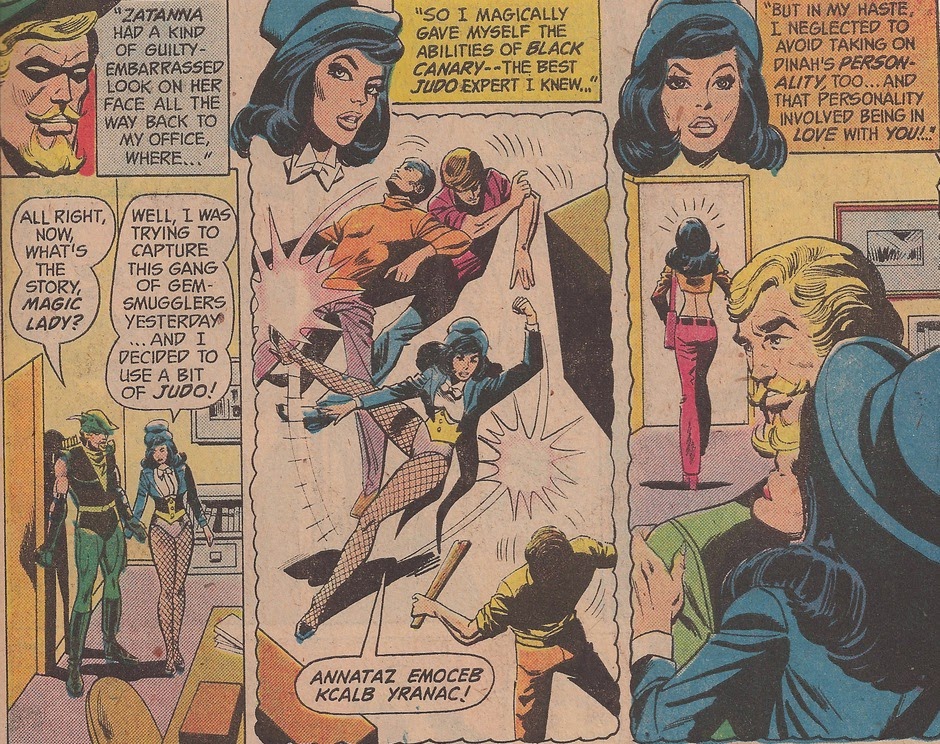 Ollie is relieved that Zatanna's attraction to him was all part of an accidental spell, or so he would think.  Zatanna doesn't want Ollie thinking it was entirely an accident and she pulls him in for another kiss before she leaves.

Green Arrow slumps into his chair to dwell on this latest revelation.  That's when Dinah--who had left to calm down, if you remember--comes back dressed as Black Canary and kicks Ollie's door down! 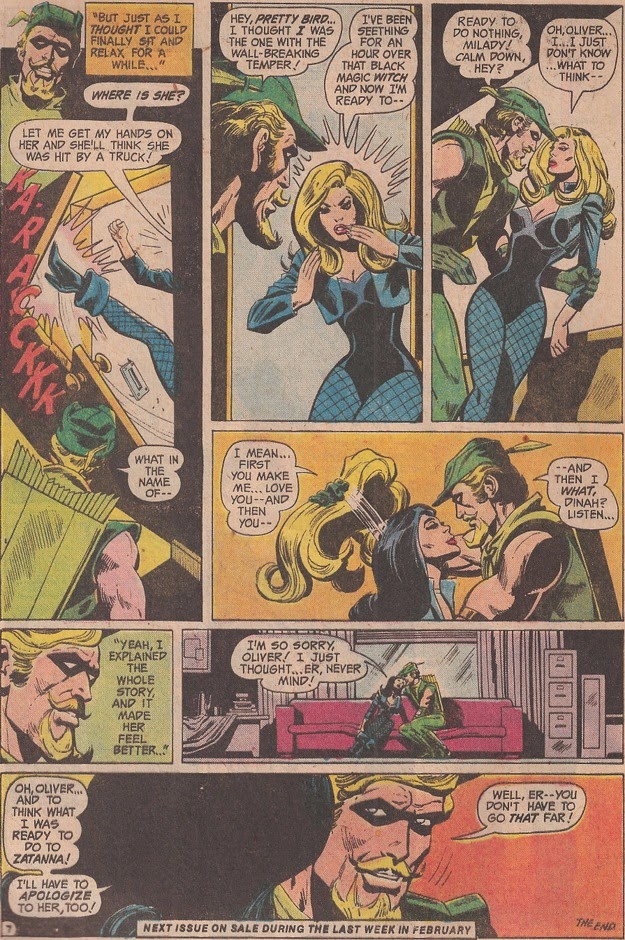 First, how awesome is Nick Cardy's cover to this issue!  Forget Kryptonite, Superman's real weakness is the threat of tooth decay!!!  As for this story, like oh-so many Silver and Bronze Age adventures, it was silly and somewhat nonsensical but so much damn fun.

Zatanna looks great in her classic stage magician costume, so much better than either of the costumes she would wear as a member of the Justice League of America in the late '70s and early '80s.  Dinah, too, looks sexy as always regardless of what outfit and hair she's sporting.  I'm not always a fan of Dick Dillin's work, but I have no real complaints about it in this story.

Even though Dinah is shunted off to the side for this story and only appears as Black Canary after the action is over, she does have an unexpectedly large role in this story.  It's flattering, as a fan of the character and her physical prowess, to see how highly Black Canary's martial arts skills are thought of by Zatanna and Green Arrow.  It's a nice validation of the character who hasn't had much to do in the Action Comics backups so far that Dinah is a master hand-to-hand combatant and that a real super-powered magic user would try to emulate that in battle.

The one lingering question I have, though: Why the hell did Zatanna turn one of the robbers into a wolf?  Wolves can still be freaking dangerous if scared or threatened; why not turn him into a rabbit or a guinea pig?