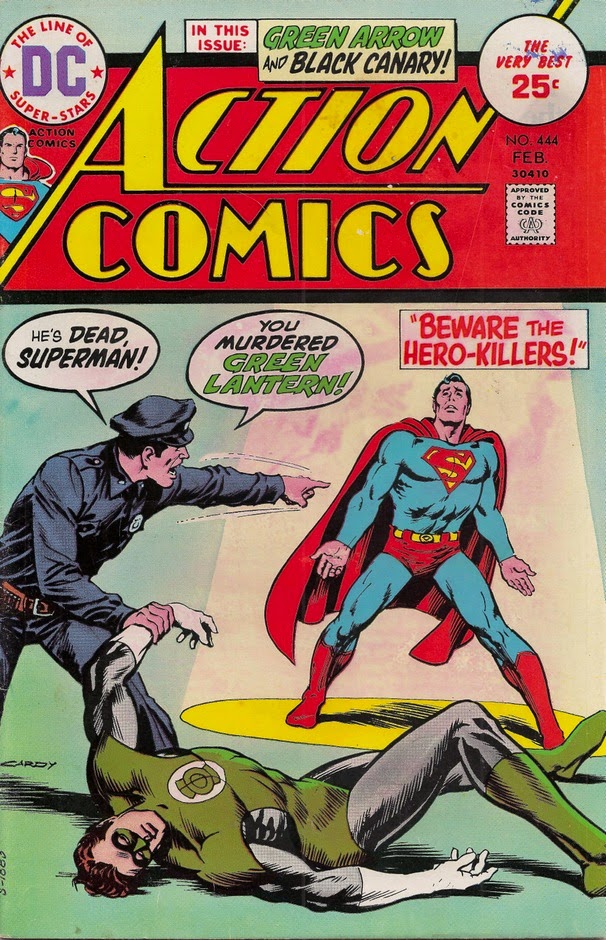 Action Comics #444 is cover dated February 1975 and hit the shelves on November 28, 1974, according to Mike's Amazing World of DC Comics.  The lead Superman story is written by Cary Bates with art by Curt Swan and Tex Blaisdell and a cover by Nick Cardy.

The ominous-sounding Green Arrow strip called "The Black Canary is Dead" is scripted by Elliot S. Maggin based on a story by Mike Grell who also provided the art.  The story begins with Green Arrow arriving at Star City Police Headquarters where the cops play a recorded message for him. 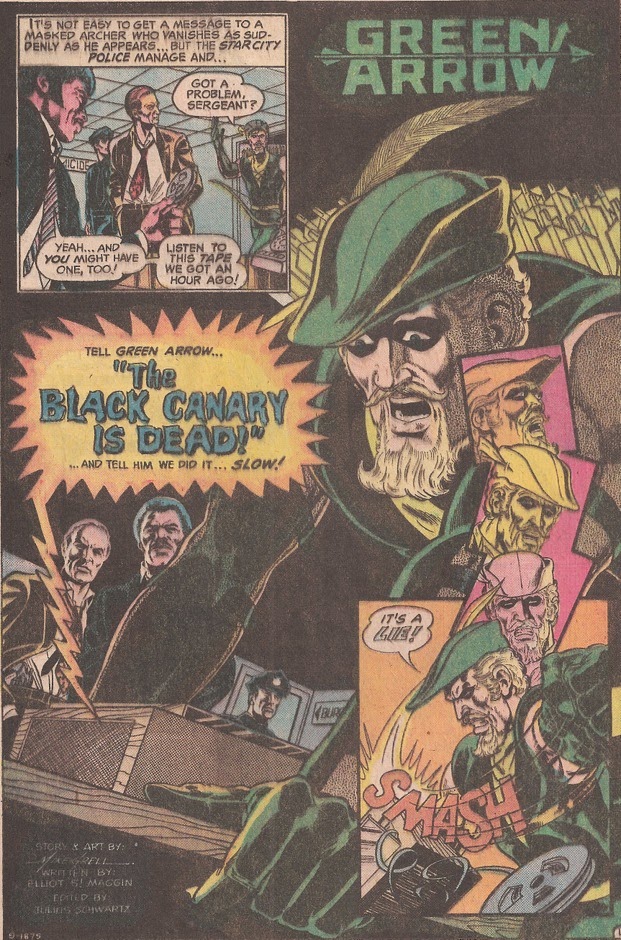 One of the detectives agrees with Green Arrow that the tape's assertion that Black Canary is dead must be a lie, because it was sent to the cops with evidence--a lock of blonde hair.  But the cops have identified the blonde hair as coming from a wig, which they think proves the Canary must be alive.  Only Ollie knows the truth, that Black Canary is naturally dark-haired and wears a wig in her crime fighting guise.

Green Arrow storms out of the police station and thinks back to a moment in the recent past when he was approached by an elderly Italian immigrant named Mr. Genetta who begged the Emerald Archer to save his grandson Tommy from losing his life to drugs like so many other teenagers these days.  But when Green Arrow visits Tommy, the boy tells him to get lost and boasts about the head of the drug trafficking syndicate, Max Looker, is so successful.

Ollie leaves Tommy, reflecting on his awful track record for not dealing with junkies in a mature, patient manner and thinks back to his ex-sidekick Roy Harper.  His attention is diverted, though, when he sees a well-dressed man getting out of a fancy car in the poorest, most dangerous part of town.  He follows the man down the street to a vacant lot.

Surrounded by street toughs, Green Arrow cuts loose, taking out half a dozen punks in the alley.  In the process, though, he loses track of the man in the suit.

Green Arrow goes to the police and describes the well-dressed man to the police sketch artist.  One of the cops identifies the mystery man as Peter Lazenby, one of the "Four Horsemen" known to control all drug trafficking across the globe.  The cop says they have identified three of the four drug kingpins, and believe the fourth one is Max Lucker, the man name-dropped by Tommy the Junkie.  The cops tell Green Arrow they don't have anything concrete on Lucker, but he runs a casino outside of Star City.

Ollie needs help roping in Lazenby and Lucker, so he goes home and recruits his lover, Dinah Lance. 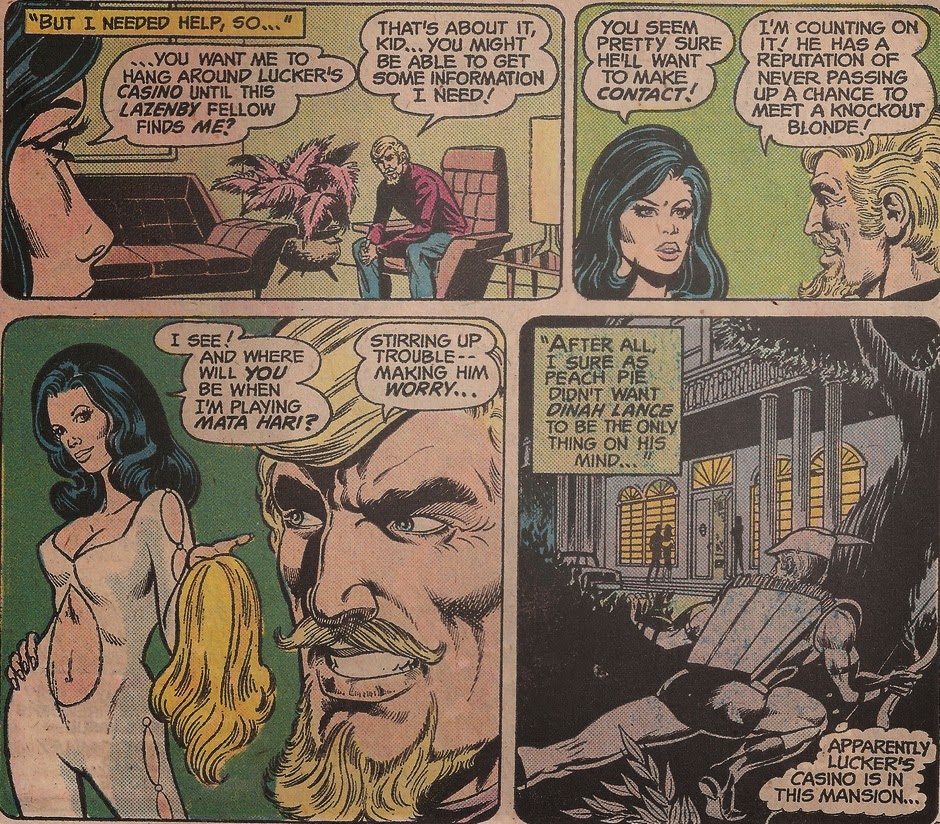 Green Arrow busts into Max Lucker's office and demands to know if he's responsible for flooding the streets with drugs.  Lucker calls security into his office and Green Arrow disarms them easily.  He fires a couple arrows that pin Lucker to his chair, and as Ollie leaves, Lucker vows vengeance. 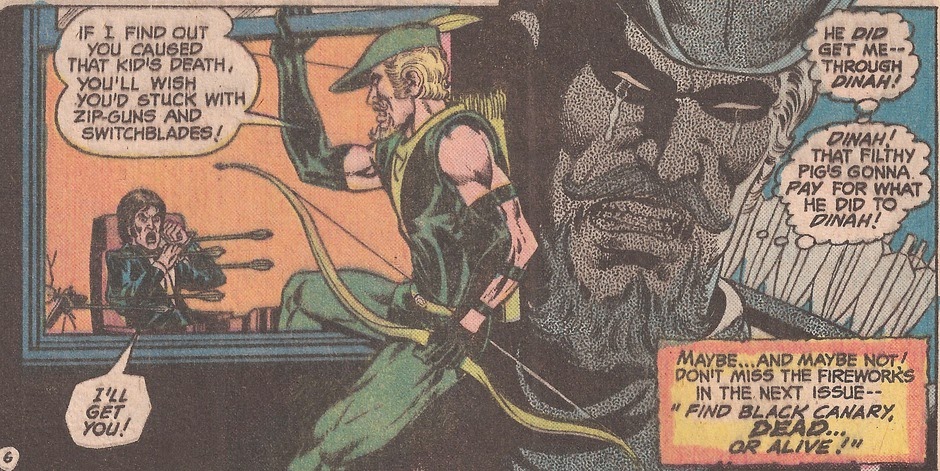 Is Black Canary really dead?  You'll have to come back next week to find out... but (spoilers) she totally isn't.

I'm loving Mike Grell's art on these backup strips lately.  It's definitely more of a DC house blend then his later stuff with these characters, so the transition from Dicks Dillin and Giordano isn't so jarring, but he throws in some personal flourishes with the action and the facial expressions.  And his Dinah, even in one panel, looks as sexy as ever.