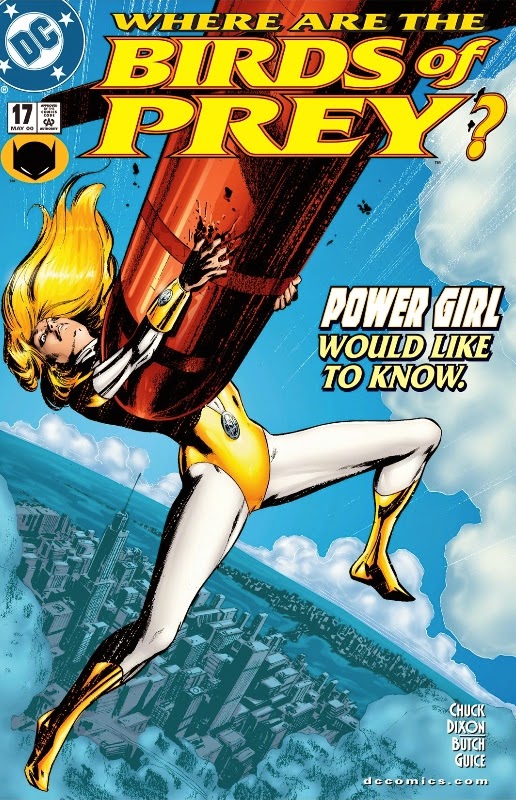 Birds of Prey #17: "Nuclear Roulette" is written by Chuck Dixon with art by Butch Guice.  His cover, depicting Power Girl desperately catching or stopping a nuclear missile pointed at New York is exciting, but the text on this cover is a little bizarre.  "Where are the Birds of Prey?  Power Girl would like to know."  Um, is that question supposed to be rhetorical?  Because Black Canary and Oracle are all over this issue.  And Power Girl is with them, working alongside Dinah and getting updates from Oracle.  There is some tension between them, yes, but it's not like the Birds have disappeared or like they're not trying to stop the Joker's plan to murder everyone in New York City.

Anyway, the issue opens with Black Canary flying over the ocean looking for the ship carrying a nuclear warhead bound for the Big Apple.  How is Canary flying?  Well, it has a lot to do with Power Girl and her post-Crisis crazy-ass Atlantean origin and powers. 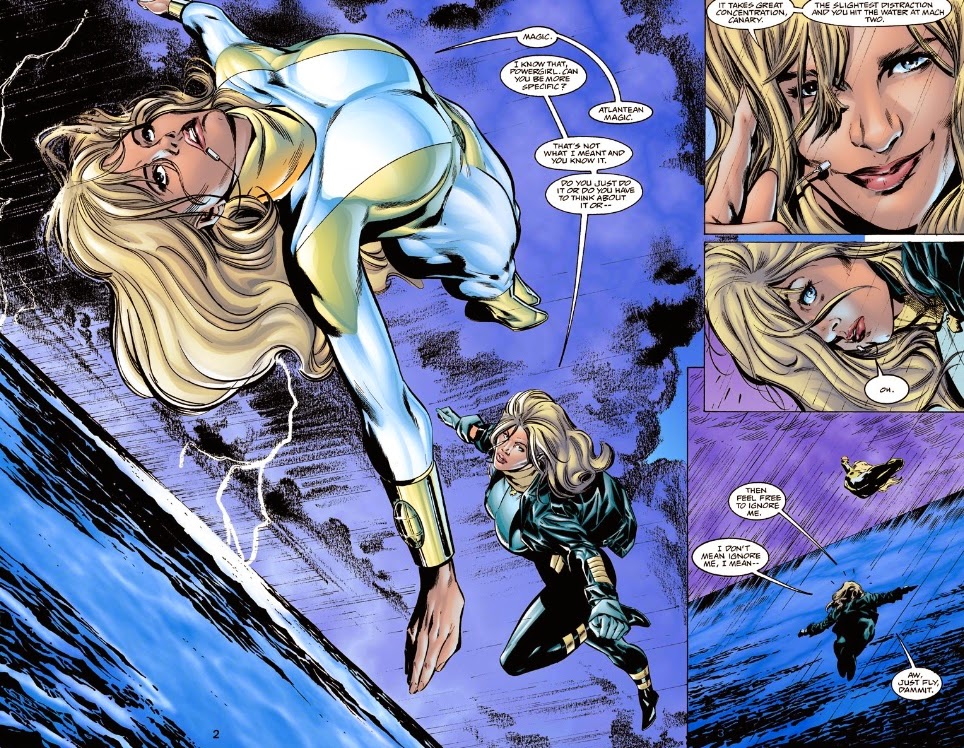 Power Girl and Black Canary find a Liberian ship and Power Girl scans it and knows that this is the ship they're looking for.  She tells Oracle to get off her back, so there is clearly some history between them and PG doesn't care for her.  The blondes drop onto the ship where they immediately come under heavy fire from the crew.

Power Girl is mostly impervious to the bullets so she takes the brunt of the crew's attack while Dinah fights her way to the bridge to interrupt the missile launch.  She arrives too late, though, as the captain presses the button. 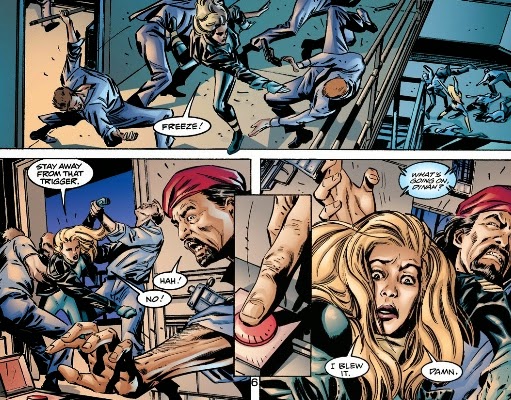 Six missiles launch from the ship, one of them slamming into Power Girl who is hovering in the air.  The missile that bumped her careens out of control and detonates in the water.  Oracle screams at Power Girl to get away from the blast sight, but Power Girl tells her it was only a conventional missile, not a neutron bomb.

Black Canary decides to interrogate the ship's captain to see how many, if any, of the missiles are nuclear. 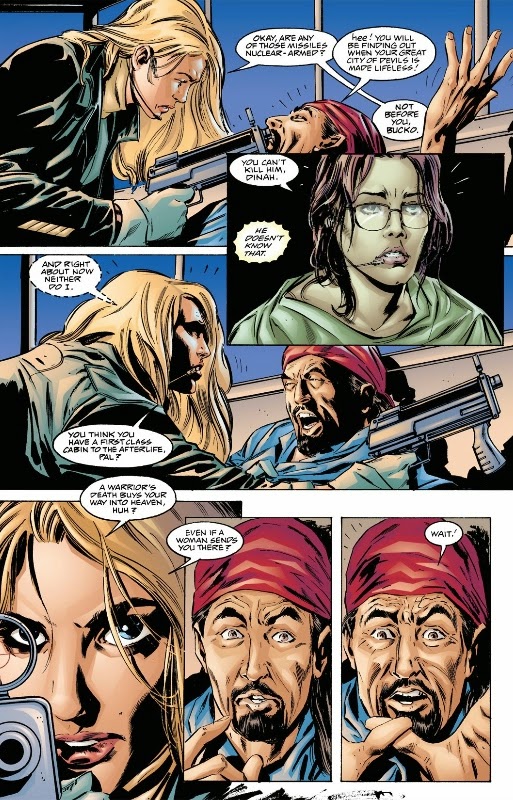 As Power Girl races through the sky to stop the missiles, Oracle updates her that only one of the five remaining is neutron capable.  Then Power Girl shows an embarrassingly poor understanding of rudimentary mathematics, so either she's an idiot or Chuck Dixon is.  But anyway, Power Girl takes out two more of the missiles, neither of them being the nuclear bomb.

Now it's up to Oracle and her back up plans to stop the three remaining missiles.

The second half of the book is some tense Tom Clancy stuff, full of technical jargon pertaining to the Navy and national security (and kind of an awkward slam against President Carter).  I won't go into as much detail because you lose a lot of the suspense, but it's a cool sequence.

Essentially, Oracle contacts Major Van Lewton at the Pentagon and coordinates attacks with the United States Navy along the Atlantic Coast and violates some international laws.  U.S. Warships shoot down two of the three remaining missiles. 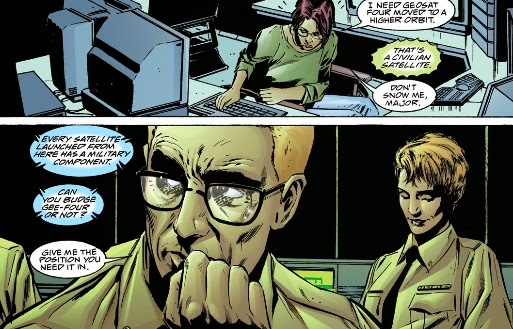 For the last missile, Oracle takes control of several satellites and bounces a laser off more than one, doing a "bank shot from pool" in order to blast the last missile before it hits New York.  The day is saved, everyone rejoices even though no one can ever speak a word of what happened hear because they all violated laws and treaties.

Back at the ship, Power Girl talks cryptically about why she doesn't like Oracle.  I have no idea what this tension is about, because PG just worked with Oracle a couple issues ago and they seemed fine.  Also, Power Girl's white and gold costume in this issue is stupid and her Atlantean origin is stupid.

This was a better issue than the last one.  It was nice to see Oracle do her thing and do it well, but Black Canary was shoved to the way background for this chapter.

Come back next week for a review of Birds of Prey #18.
Posted by Count Drunkula at 7:24 AM