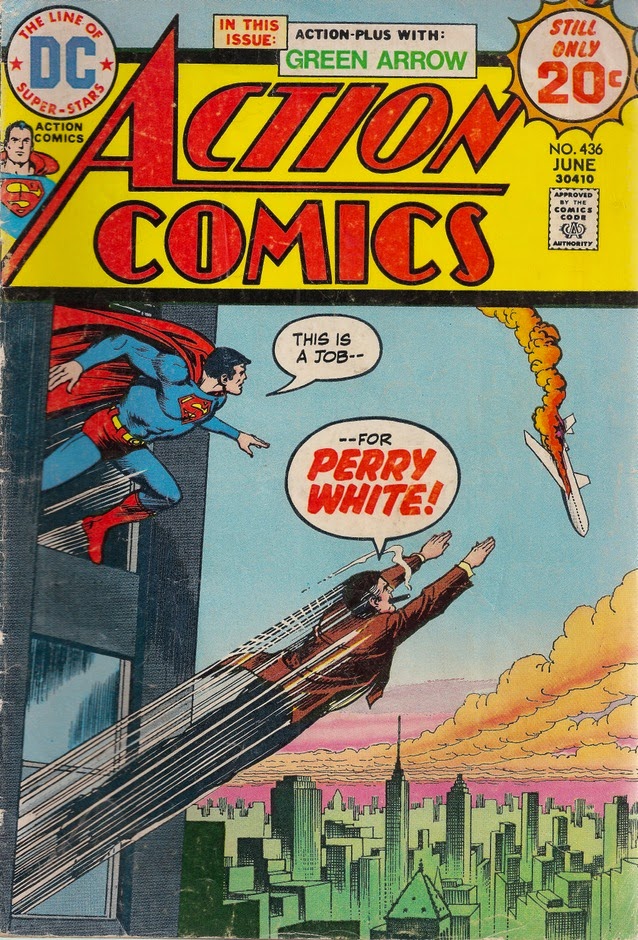 Action Comics #436 is cover dated June 1974 and hit the shelves on March 28, according to Mike's Amazing World of DC Comics.  The lead Superman story is written by Elliot S. Maggin with art by Curt Swan and Vince Colletta and a cover by Nick Cardy.

The Green Arrow strip called "Young Man with a Drum" is written by Maggin with pencils by Dick Dillin and inks by Tex Blaisdell.  The story opens with Black Canary handing an unsolved mystery off to her boyfriend, Green Arrow.  Two panels on the first page are the only appearance Dinah makes in this story, but oh well... 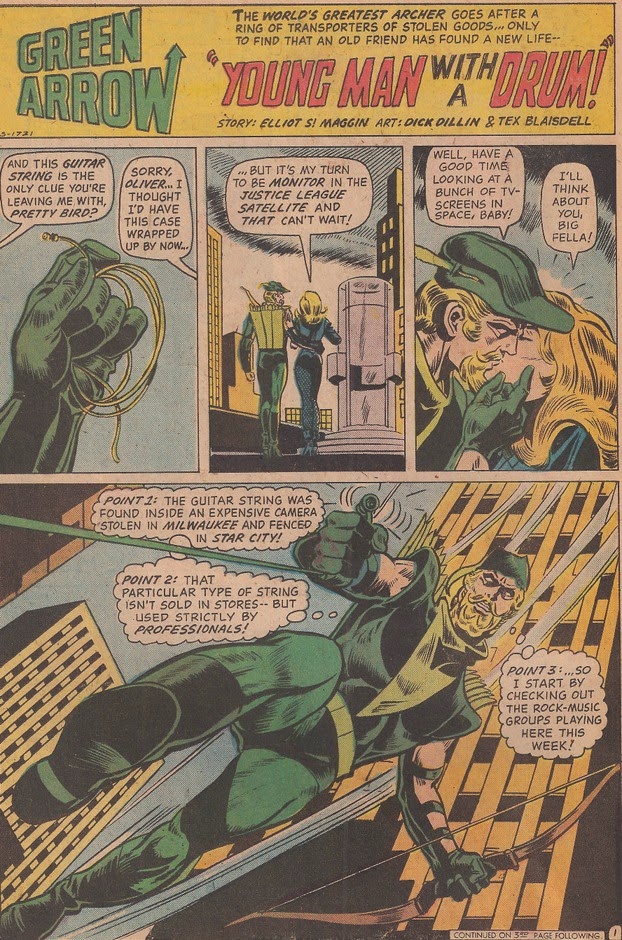 Green Arrow changes into civilian clothes and, as Oliver Queen, checks out a band called Great Frog that's playing in the park.  Great Frog just arrived in Star City after touring the country, so maybe they're involved in the case.

Unexpectedly, Ollie recognizes his former kid sidekick Roy Harper playing drums for the band.  He hasn't seen Roy since the boy headed out on his own after the historic events of Green Lantern #85 and #86 where Ollie discovered Roy was addicted to heroin.  Now he figures Roy has infiltrated the band as part of an unknown undercover operation, y'know, rather than a teenager just living every kid's fantasy of touring with a rock and roll band.

Ollie then changes back into his Green Arrow duds and snoops around the band's dressing room.  He finds false-bottoms built into the band's instrument cases and stolen cameras and merchandise inside. He theorizes that someone is concealing the stolen goods inside the band's equipment so that Roy and the others are unwittingly transporting the contraband throughout the tour.

I'm not sure why he doesn't suspect the band themselves; I guess he just really trusts Roy, who, as we mentioned earlier, has a drug problem.  Green Arrow assumes Roy knows about the stolen goods and is about ready to close the case.  After the gig, Roy comes back into his dressing room and finds his old mentor there. 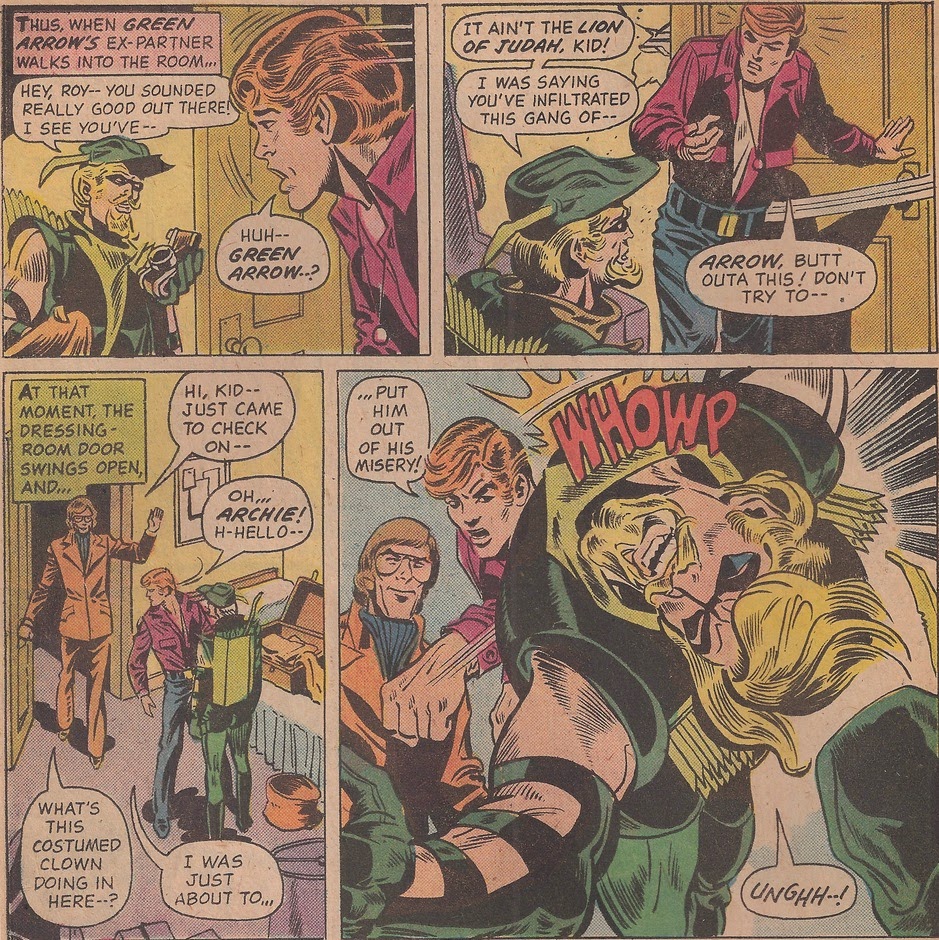 Damn, Roy, we all want to smack Green Arrow now and then, but dude!

Archie, the manager who walked in the room, is suitably impressed that Roy seemed able to take out a costumed vigilante with one punch.  He pulls Roy aside and confides in him the secret that the music tour is really a nationwide smuggling and fencing operation.  As they walk out of the room, Roy tosses a small object that lands next to Ollie, who opens his eyes, alert but not ready to give that intelligence away to Archie.

Later, a pair of goons come into the room to dispose of Green Arrow's body, but he springs up and effortlessly takes them out.

Meanwhile, upstairs, Archie takes Roy to see Mr. Aubrey, the man who books the band's cross-country tour and the man who runs the criminal operation.  He tells Roy he could have a bright future in fencing and drug trafficking, which is just want Roy wanted to hear.  At that moment, Green Arrow swings through the window and kicks Aubrey across his desk.  Ollie fires off two arrows that pin Archie to the wall and plug the barrel of his gun. 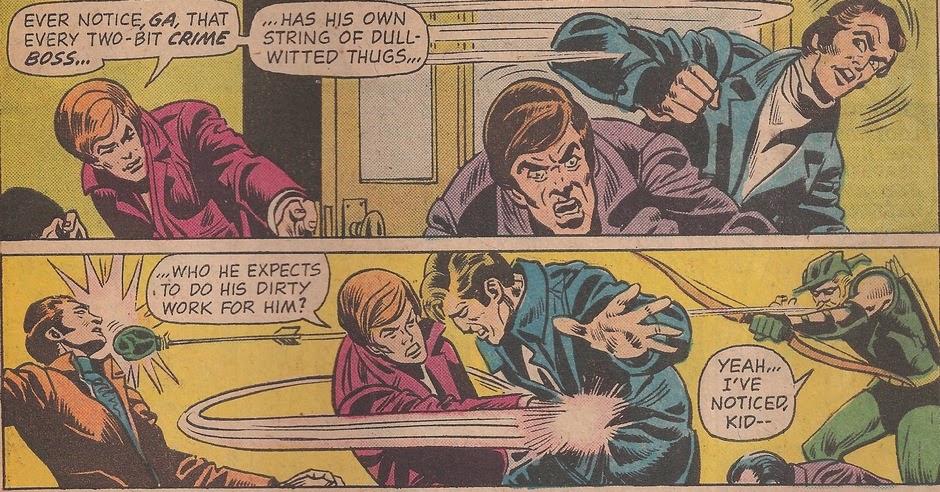 Aubrey confesses to the whole criminal enterprise and the police take him and his goons away.  Green Arrow chides Roy for the impractical use of the radio transceiver he threw down in the dressing room after pretending to know Arrow unconscious.  Roy tells him he would have had the case solved and the bad guys taken out whether Ollie showed up or not.  Ollie tells him not to be so headstrong and to ask for help once in a while. 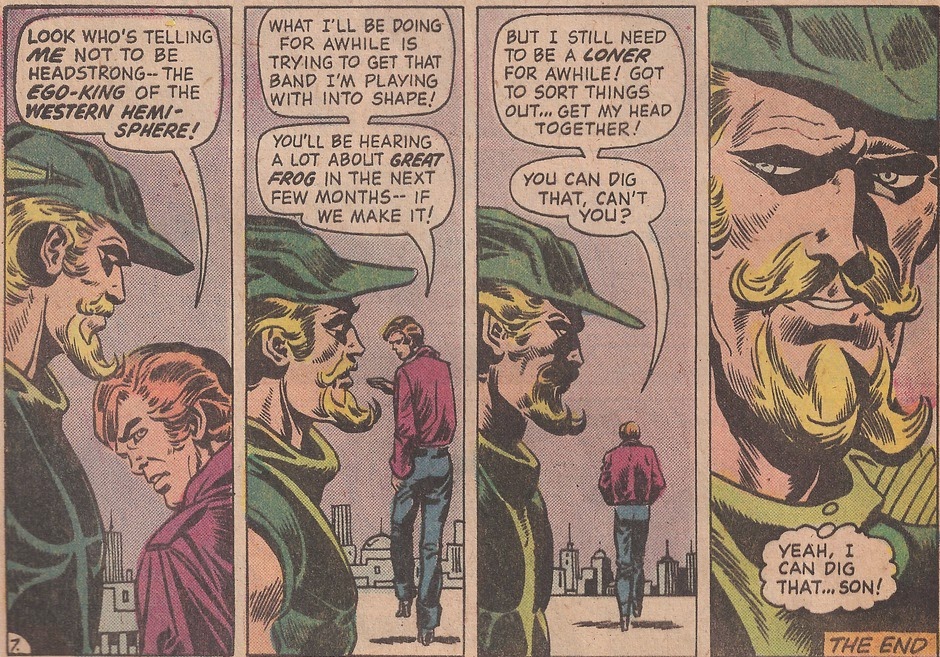 Sorry to say, Roy, but I don't think Great Frog has a very bright future.  Also, you must not have been a very good drummer, because Darwyn Cooke pegged you for a bass player on his variant cover for Teen Titans #5 this December.  I mean, you do seem more like a strings guy, right? 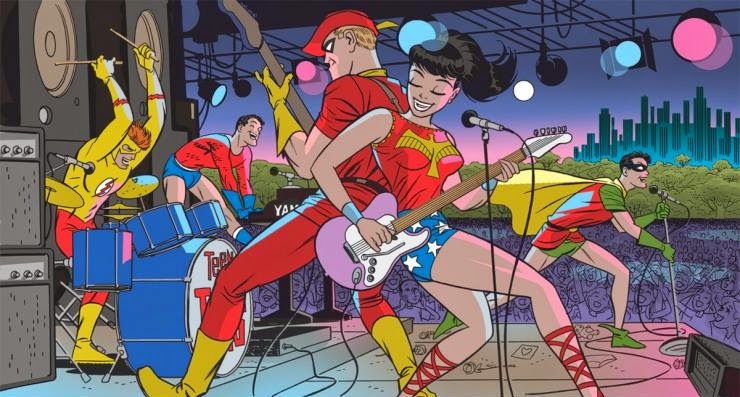 We don't get much of Black Canary in this story, but it's still a pretty enjoyable tale, and Maggin makes nice use of continuity by extending the tension between Ollie and his ex-partner.  Green Arrow acts like he wants to it out, like he expects Roy to come back and everything will be the same, which was always Ollie's problem when it came to Roy.  When it came to any of his friends and family, actually.  For all his pretense about social activism and progress, Oliver Queen doesn't handle change to his personal life well at all.